After 10 years, the UN’s Universal Periodic Review mechanism for scrutinizing Member States’ human rights records is having a real impact—but more must be done to ensure its continued success.

The United Nations’ Universal Periodic Review process (UPR) is the only global human rights mechanism scrutinising the record of all states. By the end of 2016, all states will have been through their second UPR review conducted by the UN Human Rights Council.  The third series of reviews will begin in spring 2017. It’s a good moment, therefore, to take stock: what has the UPR achieved, and how can it be improved?

The UPR was established to move away from the allegations of selectivity and bias that tainted the old Commission of Human Rights; it is universal not only geographically but also thematically. The human rights record of every UN Member State is discussed in an open 3.5 hour meeting, and recommendations are made—the state under review must eventually indicate which of those it accepts. The UPR itself strengthens the other UN human rights mechanisms, where recommendations call for States to issue standing invitations to the Special Procedures, to ratify international treaties or to submit overdue reports to the treaty bodies.

A study conducted by UPR Info on the level of implementation of recommendations in 165 countries concludes that one in two recommendations were either fully or partially implemented three years after the UPR review. Concrete examples of how the UPR has advanced human rights on the ground include Fiji’s abolition of the death penalty, Côte d’Ivoire’s implementation of a law for the protection of human rights defenders, the Seychelles and Nauru lifting a ban on same-sex activities, and China reducing the number of crimes carrying a death penalty.

The UPR has also become a vehicle to promote and legitimise a greater role for civil society organisations (CSO). In Viet Nam and Sri Lanka, the UPR was a key process in legitimising the role of LGBTI activists. The mechanism has led to CSO coalition-building, both for joint submissions to the UN in advance of the UPR, and to follow-up on the implementation of recommendations. Effective coordination can be seen in civil society coalitions in Australia, Singapore, Ireland, Kenya, Thailand, and Swaziland, to name a few. These coalitions have also functioned as a platform to initiate discussions between CSOs and the government, and among CSOs themselves, on contentious issues including abortion and female genital mutilation.

In many national contexts, the UPR has prompted a shift in the traditional adversarial paradigm between CSOs and governments, to a more cooperative, partnership-based relationship. After Kenya’s second UPR, the national human rights institution and local CSOs helped draft the implementation plan adopted by the Government. In Colombia, a partnership was established between the Government and an international CSO, Plan International, in order to implement a UPR recommendation; as a result of this collaboration, 500,000 people were legally registered for the first time. 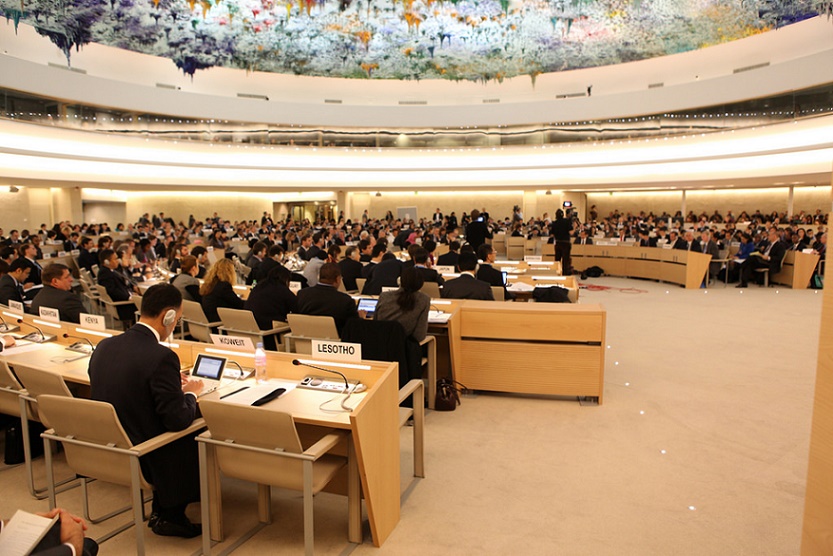 A delegation from the United States presents for the Universal Periodic Review at the UN.

The UPR has accomplished its mandate of promoting universality—no other international human rights mechanism can claim 100% participation from states representing all cultures and political systems. The UPR has consolidated the recognition that human rights are not merely a domestic issue, but are a matter too of international accountability.

However, despite its significant achievements, it would be both inaccurate and hubristic to say that the UPR is flawless. The current positive energy with which stakeholders approach the UPR will only be preserved if states strengthen their efforts to implement the recommendations they receive. The continued credibility and legitimacy of the UPR ultimately depends on whether it can fulfil its promise to improve the human rights situations on the ground.

The Achilles heel of the UPR process is the lack of any formal, follow-up mechanism.

The Achilles heel of the UPR process is the lack of any formal, follow-up mechanism. States should adopt stronger provisions and standards for follow-up, including the establishment of national plans of action and national coordinating mechanisms. While the implementation of recommendations is the goal, the reporting on implementation is also critical. Both CSOs and the state under review must significantly improve their reporting in order that recommending states know whether and to what extent progress has been made since the previous UPR.

In the absence of an official UN follow-up mechanism that monitors states’ implementation, UPR Info has identified three characteristics of those states who successfully engage with the mechanism.

First, given the wide coverage of UPR recommendations, the government must employ a holistic approach to implementation with internal collaboration at the centre of its efforts. States like Greece, for example, installed an inter-ministerial UPR working group responsible for coordinating implementation efforts. In Mauritius, a UPR steering committee included government officials, representatives from civil society and the National Human Rights Institution.

Second, a vibrant civil society that undertakes activities which complement state efforts is key for an inclusive implementation phase. States are strongly encouraged to engage in broad consultations with civil society in all stages of the UPR process. It is important that the donor community financially supports national NGOs to ensure their meaningful engagement throughout the UPR process. The RightsNow campaign rolled out by Irish NGOs is a compelling case for the strategic benefits of working in coalitions.

Third, as demonstrated in Mongolia, partnerships between the government and CSOs built on transparency and trust further implementation—their accumulated efforts complement each other towards achieving UPR recommendations. The UPR works best when all stakeholders stick to the idea of cooperation and universality.

The year 2016 is a milestone for the UPR. States, civil society and the international community as a whole have a vested interest in its continued success. The mechanism has so far proven its worth. A joint package comprised of (1) inter-ministerial UPR working groups and national human rights follow-up systems, (2) funded CSO coalitions; and (3) partnerships and regular meetings between all UPR stakeholders will prove a powerful formula for accelerating implementation of UPR recommendations.  Much remains to be done, but since its establishment eight years ago, the UPR has demonstrated an unprecedented ability to reshape traditional human rights approaches.

Aoife Hegarty is a Programme Manager at the Geneva-based NGO, UPR Info.

Hans Fridlund is a Programme Manager at the Geneva-based NGO, UPR Info.