How different are human rights organizations and the state institutions they challenge? A key Israel group has pulled away from cooperation with the army, arguing that some close ties are counter-productive.

In the past decade, researchers and practitioners have critically reflected on the tendency by which human rights organisations are drawing closer to armies. Indeed, in an attempt to counter arguments made by armies justifying their operations, NGOs and UN missions sometimes mimic military logic and research practices. This is but one example of the complex amalgam of similarities and differences among human rights organizations and state institutions. But what if the similarities run even deeper than we’d like to admit? Can we, as human rights defenders, really draw a line clearly differentiating ourselves from state institutions?

On May 25th 2016, B’Tselem—the Israeli Center for Human Rights in the Occupied Territories—announced that it would end its 25 year long practice of filing complaints to the Military Advocate General (MAG) Corps, Israel’s military legal system, in cases of suspected harm to Palestinians. Upon releasing their report, the organisation declared:

“…there is no longer any point in pursuing justice and defending human rights by working with a system whose real function is measured by its ability to continue to successfully cover up unlawful acts and protect perpetrators.”

For many of us, this was not a surprising move. These military investigations do not address policy or policy makers; they rarely include any effort to retrieve evidence; statements are given months after the incidents; and soldiers’ versions of events are systemically prioritised over Palestinians’ accounts.

When I worked for B’Tselem from 2006 to 2009, one of my duties was to file complaints to the MAG Corps whenever the testimonies I received indicated a violation of rights that also defied the army’s own directives. The Military Police, who were usually 19 or 20 years old, would follow up with phone calls. They would ask for our assistance in contacting the victims, and we then invested significant time and effort in aiding a legal process in which we had very little faith, given past experience.

At times, we worked so closely with the army that our identity became blurred to the Military Police. For example, in a conversation I once held with a Military Police investigator new on the job, she wanted to check a detail and get back to me, so she asked me for my army switch code number. Her assumption, while hurtful to my self-image, was understandable. 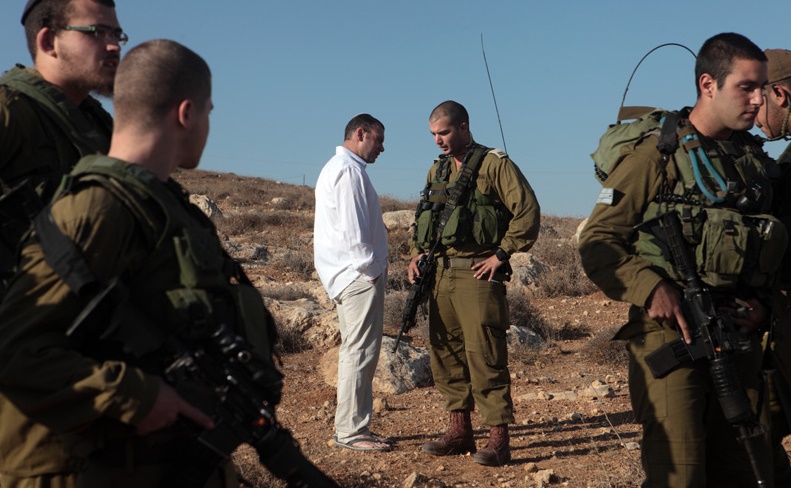 When interacting with the Israeli military and other local actors, the human rights community must be conscious of its associations with and resemblance to Israeli state institutions.

Yet the practice of filing complaints is just one sphere in which human rights and the military come together. Global legal-political shifts have led to changes in NGO practice. As the legal scholar David Kennedy (2006) observes, international humanitarian law (IHL) has come to provide a language “making sense” of war. International law now takes up the space once reserved for explicitly political decision-making and this legality lends legitimacy to state action. These changes opened up new opportunities for human rights organizations to make arguments about state violence, but arguments based on IHL move away from the premise of human rights that does not accept killing as a legal act.

Based on an analysis of the report produced by the UN appointed Goldstone Fact Finding Mission investigating the 2008/9 Israeli offensive in Gaza, Eyal Weizman identifies a shift in discourse among human rights agents, away from testimonies and to a “forensic era”, where objects and “hard proof” replace people and speech. Human Rights Watch, for example, carries out “battle-damage assessments” in various localities. As part of this practice, the organisation chose to employ Mark Garlasco, a former Pentagon intelligence analyst and “targeting specialist” turned human rights researcher. While Garlasco no longer works for HRW, at the time the organization stated that Garlasco’s military experience improved their understanding of targets and strikes and that his ties helped them develop better relationships with the military. While the pragmatic reasons are clear—military professional experience and ties allow HRW to better assess and report civilian deaths—such close military connections also shape human rights practice.

B’Tselem, however, stated that its interaction with the Military Police was counter-productive, as it lent legitimacy to the Israeli military and, by extension, to the Israeli occupation.

The question of legitimacy also rises in litigation issues. The Israeli human rights movement, born in the late 1980s alongside the first Intifada, has filed numerous petitions to the High Court of Justice over the years. The success record of these organisations is poor, and generally the court has refrained from intervening in the occupation and its various abusive policies.

Yet, state publications use NGO petitions to showcase the purportedly functioning Israeli democracy and the civil legal supervision of the army. In 2004 the Israeli High Court of Justice made sure to reach a decision relating to the Separation Wall just before the International Court of Justice (ICJ) publicised its Advisory Opinion, in a clear attempt to lessen the blow of the ICJ’s decision. On another occasion, a Spanish national court refrained from debating a particularly horrendous “targeted killing” attack, which it could have reviewed, based on the principle of universal jurisdiction. It declined to investigate based on the argument that the issue had already been dealt with by the Israeli High Court of Justice.

Human rights organisations provide vocal opposition to the abusive practices of the occupation and to the regime of occupation itself. But they also share a discursive and practical liberal common ground with the military legal system. As Lisa Hajjar observes: “It was Israel’s enthusiasm for law and the ornate legalism of official discourse that catalysed and propelled the development of a local human rights movement, which served as the harbinger of legalistic resistance.” A key element here is the belief (whether strategic or earnest) in law and in the tools it offers as an avenue to justice.

But “more law” is not a guarantee for justice. Like Western militaries, the Israeli army has undergone a legal shift in the last two decades. Military lawyers now take part in preparing target hit lists, on-the-spot operational decision making and participate in all major forums of debate on warfare. The simultaneous rise in military violence towards Palestinians should concern anyone assuming that law, by definition, brings justice or is a force that constrains power.

In this era, characterised by closer ties between human rights organisations and militaries, when NGOs engage in debates on “proportionate” collateral damage and “accepted” killing, B’Tselem’s publicised renouncement of a long-established avenue of cooperation that has proved to be counterproductive is a welcomed change. This similarity should be placed in context—we share a common ground with our opponents. Even if we’d like to think of ourselves as the absolute opposite of the state institutions that we challenge, the language of human rights is part of a liberal discourse that is common to us and to the state. When we work in the field of human rights, we can and should strive to make decisions informed by an awareness of the bigger picture, the co-optation of our work and our complicity with local and global shifts of power.

Maayan Geva is Lecturer at the University of Roehampton’s Department of Social Sciences. Her book, Law, Politics and Violence in Israel/Palestine: The Israeli military International Law Department (Palgrave Macmillan), will be coming out in October 2016.