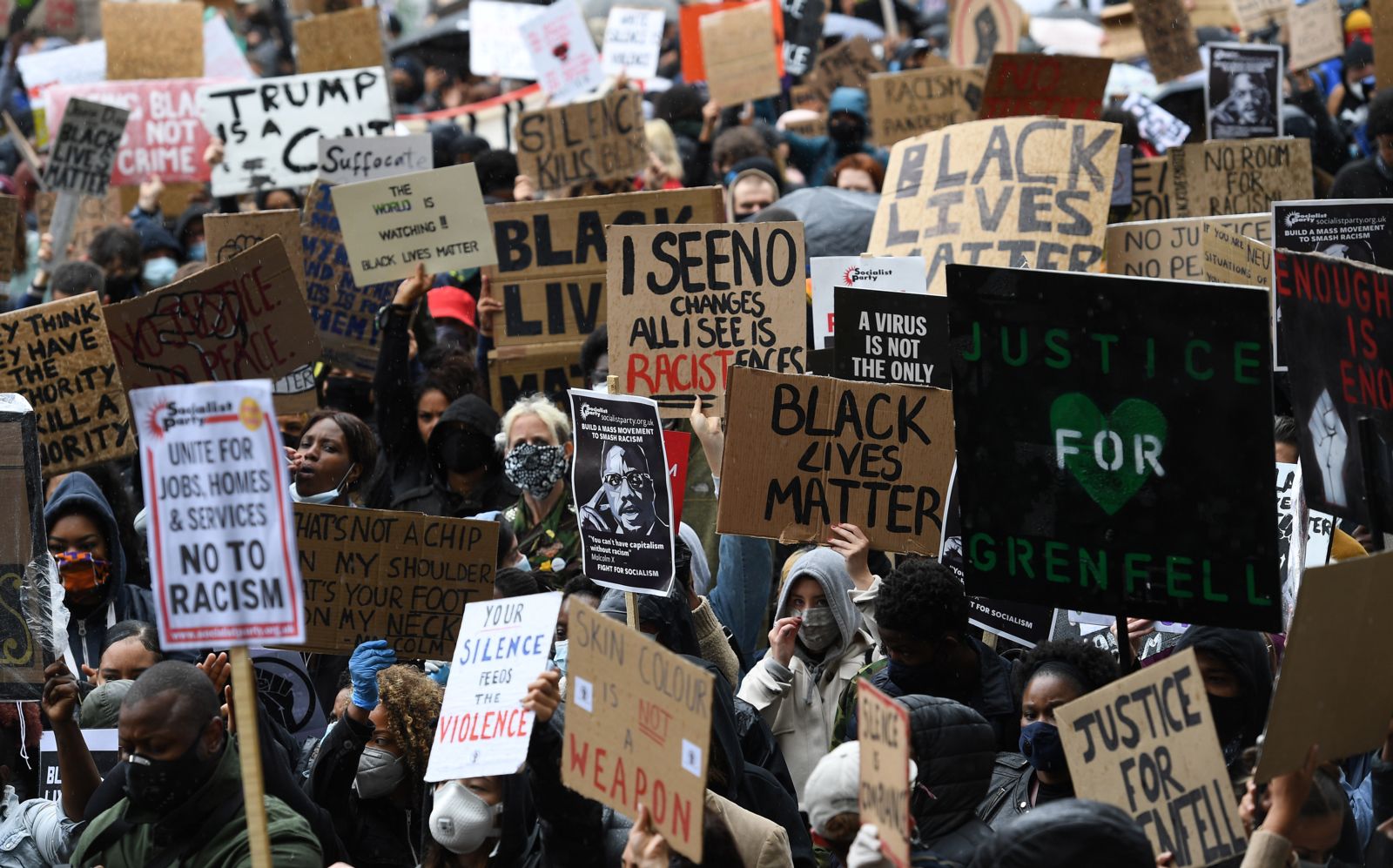 This image depicts thousands of people defying the coronavirus lockdown order to take part in a 'Black Lives Matter' (BLM) protest at Parliament Square in London in June 2020. The image was chosen to interrogate the relationship of human rights actors and institutions to the experiences of harm rooted in subjectivity. EFE/EPA/ANDY RAIN

Does everyone in the human rights movement still share the same understanding of human rights? This inconvenient question now frequently comes up during work meetings, as concerns grow around not just right-wing identity politics and its impact on human rights, but also around “woke” activists and their relationship to universal rights (starting with free speech) and human rights methodologies.

A working definition for “woke” activists, for the purposes of this article, could be critical social justice activists who emphasize the primacy of identity (racial, gender, etc.) and lived experience, formulate identity-based grievances and claims, and aim to dismantle “systems of oppression” (“white supremacy,” “patriarchy,” etc.).

In the background of the discourse around the term “woke,” there is a mounting tension between subjectivity and universalism. As “woke” approaches and methods stem from and are grounded in an hyperfocus on identity, subjectivity, and lived experience, they lead to a relative disregard for objectivity and empiricism, which are at the center of traditional human rights approaches and methods. Ultimately, this puts the unity of the human rights movement at stake.

What is happening in practice?

In the name of emotional safety and protection from “insensitive,” “harmful” or “offensive” speech, “woke” activists promote expanded legal or de facto restrictions to free speech. Yet, under international human rights law, most offensive speech is actually protected, not banned. Prohibited speech is the exception. The test and rules set out in Articles 19(3) and 20 of the ICCPR are key—the threshold for prohibition is high.

Human rights experts have emphasized that no one has a right not to be offended. Human rights law protects people from discrimination, violence, and hatred that constitutes incitement to discrimination, hostility or violence. It does not protect them from emotional harm.

The maxim “The answer to hate speech is more speech” remains legally and morally valid. How do you address ideas you dislike if you cannot access these ideas, especially if only “safe opinions” are allowed? People have a right to access distasteful opinions, insensitive or unpleasant views, bad jokes, and even hateful beliefs. Offensive speech has a freedom of opinion dimension.

The end result of constant demands for “safe spaces” is the emergence of people who are unable to deal with others’ imperfections (or simply adverse viewpoints) and end up advocating for restrictions to free expression that go way beyond the restrictions that international human rights law permits.

The “woke” offensive against “harm” also threatens free expression’s “twin right:” freedom of religion or belief. Demands for safe spaces and the defense of minorities result in asserting a right not to be offended. This use of subjective feelings of “offense” is similar to some states’ attempts to undermine universal rights in the name of preventing “defamation of religions”—a human rights-incompatible concept.

While a part of the “Je Suis Charlie” movement comprises people endorsing the views expressed in Charlie Hebdo cartoons, it was also about upholding everyone’s right to speak freely about any topic. Yet, for the “woke,” as defense of secularism includes the right to criticize religions (which may offend people’s feelings) and freedom from religion, secularism is a target.

While movements like “Me Too” and protests against racism and police violence have brought structural issues onto the public agenda, social media mob justice demands immediate sentencing. Evidentiary requirements and minimum standards of proof (“beyond reasonable doubt,” “reasonable grounds to believe”) disappear. The burden of proof is reversed: it is up to the accused to prove their innocence.

To be sure, these are not formal judicial proceedings. Yet, they have real effects. Let us not pretend that this does not count. The imperative of listening to the victims and believing them in the first place does not mean refusing to examine the facts or uphold due process. It means listening to and believing the victims—and in the majority of cases, victims’ accounts are true.

An exclusive focus on subjectivity undermines the empirical basis of human rights findings.

In the name of achieving equity, “woke” activists discount basic democratic norms. To “fix the original sin of racism,” some suggest to endow unelected bodies with disciplinary tools or to double-count ballots cast by Black residents.

The systematic replacement of “equality” with “equity” in U.S. official policy discourse also comes from an identity-based critical social justice background. While human rights law recognizes the need to fight indirect discrimination and treat people who are in different situations differently to address structural injustices (the CERD and CEDAW Committees’ jurisprudence is clear), there are precise criteria for temporary special measures. “Equity” is too vague.

These are some of the ways in which identity-based activism undermines human rights. But how did we get there?

Human rights methods are scientifically self-conscious. They include reflections on the strength of their inferences, scope, biases, and limitations. They use norms for the production of knowledge: collecting information in a neutral manner; using rational arguments; formulating and testing hypotheses; questioning assumptions; looking for confounding variables; checking for internal consistency; valuing (self-)doubt and modesty.

The key issue with identity-based activism is its sacralization of subjective experience. Sacralization of subjectivity and lived experience (which some call “standpoint epistemology”), which draws inspiration from postmodern approaches and critical theory, leads to shifts in the way objectivity and knowledge-production processes and norms are approached. It may lead to relying on less solid—or at least more contested—methodologies.

In Karl Popper’s logic, a human rights theory that could not possibly be proven false (that would not be “falsifiable”) would be closer to a religion or an ideology, than to science. This is why critical-theoretical approaches to human rights are problematic. They start from their conclusions, rely on causal reductionism, and eliminate doubt and experimentation. From a positivist/empirical perspective, they are epistemologically flawed.

Do not get me wrong: subjectivity has value. Empathy, compassion, and recognizing the diversity of lived experiences (for example, acknowledging the multiple and intersecting threats women of color face) are part of human rights work. Nevertheless, an exclusive focus on subjectivity undermines the empirical basis of human rights findings.

Truth is not just the victims’ truth. To avoid epistemological and methodological biases, we need sound empirical assessments. “It’s about impact, not intent” is not a valid human rights method. Subjective experience of harm cannot be a valid test to assess restrictions to rights. The latter must be based on objective standards and cumulative criteria (see the Rabat Plan of Action, regarding free expression).

If you rely exclusively on subjectivity (“I’m offended”) and use vague criteria (“That person is ‘causing harm’”) to define the scope of rights and criteria for restrictions, then you enable those who want to destroy rights to do so—there will always be someone claiming to be offended.

A recipe for disaster

If identity-based methods become more widely accepted in the human rights movement and more decisions are based on “woke approaches,” we could reach a point where people consider that only their lived experience counts; that it is the truth, that it cannot be challenged or scrutinized, and that humankind is not one but divided.

At the collective level, this would be a recipe for disaster.

Being trapped in their own subjectivity, everyone and every group could use their identity-based grievances to formulate identity-based claims. These claims will unavoidably collide with one another and lead to further social atomization.

The human rights movement must find the right balance between subjective experience and objective standards. It must figure out how to take subjectivity and the diversity of lived experiences into account without jeopardizing universalism. The conflict is unresolved.