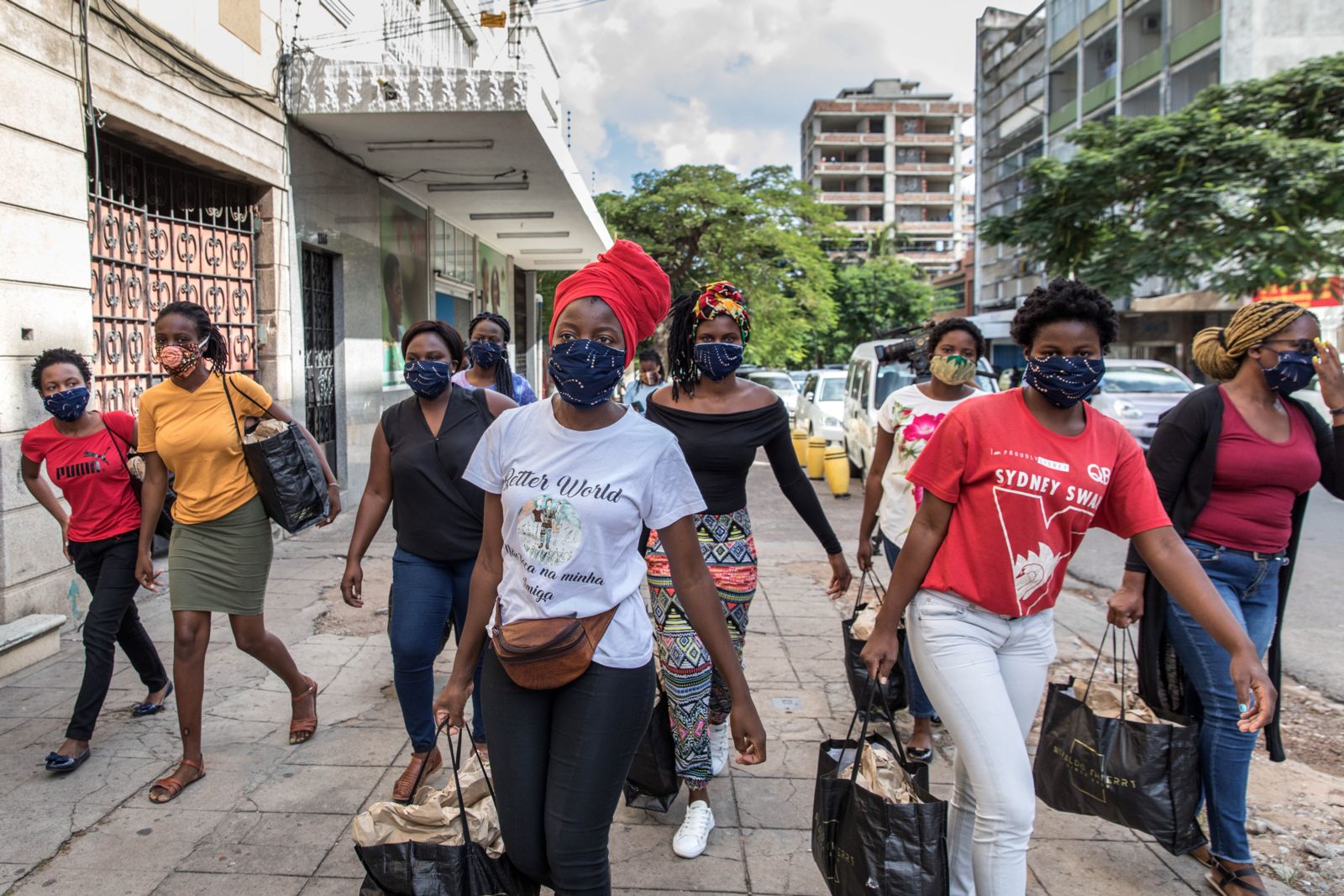 A group of activists women walk during a daily distribution action of capulana masks (traditional printed fabric) made from small donations from local designers, in Maputo, Mozambique, in April 2020.

A deep change in approach is needed to alter the basic conditions of those who experience persistent human rights violations. Legal empowerment—led by the grassroots, with lawyers and other professionals in supporting, rather than leading roles—is a crucial part of the justice transformation that is needed.

When rights-holders directly engage institutions affecting their lives, they demand that systems become more accessible and responsive to the daily challenges of the people. And when the law and legal systems are actively harming marginalized and oppressed peoples, a critical form of legal empowerment can ensure they are the authors of their own liberation.

They should support community justice workers such as community paralegals, monitors, and movement organizers. They should also ensure that strategic litigation is rooted in the most pressing concerns articulated by communities, collectivities, and movements. And they should take their cue in law and policy reform efforts from communities who seek to shape the law into a more accurate reflection of the justice they seek.

Such transformations aim to make human rights advocates reliable allies in efforts to shift power toward those most directly affected. To achieve this shift, accurate terminology is also needed to distinguish technocratic, development-focused, and sometimes top-down forms of legal empowerment from the more thorough-going kind, which seeks to build the power of movements to change the way societies organize themselves. I suggest that human rights advocates should embrace a ‘critical’ form of legal empowerment, using insights from movement lawyering, rebellious lawyering, and radical lawyering to reflect on our role in transformational work.

Scholars have argued that the legalism of the human rights movement has been one of the major forces behind its enormous failings. While these critiques have been refuted in many aspects, the underlying concern retains its salience: human rights activism—especially the type concentrated in large, Northern-based NGOs—has often focused its energies on the adoption or ratification of international treaties, formal legal changes, and victories in big cases. Human rights advocates have too often been ‘elite, professionalized shamers and blamers documenting failures to comply with international law.’

This legalistic orientation has been to the detriment of other methods for ensuring behavior change in government institutions, business practices, and international organizations of the type that would transform peoples’ daily lives. In many ways, human rights advocacy has often empowered lawyers more than communities.

However, around the world, another model is being pursued. The monopoly that lawyers have had on the legal system and the fight for rights is being challenged from the bottom-up: community paralegals and ‘barefoot lawyers’ are working with people to pursue their own claims; community-based monitors are uncovering rights violations at the grassroots level; and strategic litigation is being driven by movements themselves, used as a tool for broader mobilization and institutional change.

From a human rights perspective, the promise of these approaches lies not only in their efficacy, but also in the way they advance what rights-based approaches have demanded of government officials but not always of themselves. They require that lawyers recognize—and follow—the leadership of those who are the targets of injustice; they demand the accountability of lawyers to rights-holders; and they require engagement with community demands for equality as rights claims—whether supported by the existing law or not.

Further, legal empowerment strategies facilitate the broad ‘localization’ and ‘vernacularization’ of human rights, as they involve people advancing and claiming their own rights in their own idiom. Legal empowerment also enlarges the focus on actors impacting human rights, engaging not only the usual (national) suspects but also frontline state agents like local police officers or doctors and nurses in medical outposts, as well as non-state actors—from the local to the global—that exercise significant power over communities, including representatives of companies or development (I/)NGOs.

In many contexts, legal empowerment suggests a shift away from dichotomies such as state versus private sector or local versus international and toward more embedded understandings of how power plays itself out across borders and in given contexts. Legal empowerment centers and demands accountability from all powerful actors impacting the human rights of the disempowered.

A focus on how communities and movements are using legal empowerment to address the daily impacts of global injustice—as a practice, an approach, and a lens—may allow scholars of human rights to broaden our understanding of how communities and movements are engaging with the law and legal systems to advance their human rights and to resist exclusion and oppression. Further, categorizing these efforts under the rubric of legal empowerment may allow us to see the cross-movement ways that practitioners are building new forms of solidarity and interaction out of the commonalities of their legally inflected struggles.

The potential of legal empowerment will be more fully realized when it embraces what movement lawyers have long recommended: a ‘critical’ shift to understanding that social change—and transformations in major economic, social, and cultural structures—will come only when legal efforts contribute to building the power of communities facing human rights violations to transform those systems.

Of course, there are dangers and limits to this approach. Dominant groups may visit backlash—including violence—on communities demanding change. Communities may ask lawyers to take on more traditional roles when they face the worst a legal system has to offer. The law itself may have little to offer in places where the state is absent or intensely predatory. In these contexts, legal empowerment may be too perilous or just ineffective.

Still, at a time when the results of global inequality—including racialized mortality and the death of working class ‘frontline workers’ in global pandemics and the deathly injustice of climate change’s unfolding disasters—are front and center, human rights has an opportunity. It can join with internationally-aware and globally-inflected movements, embracing legal empowerment and other methods for transformation, renewing the spirit of a field that has become increasingly irrelevant in many places.

This ‘critical’ component of critical legal empowerment entails a rejection of the technocratic approaches sometimes forwarded by rights professionals and an embrace of community-based efforts to engage the legal system in strategies to shift power downward. Inspired by scholars of critical race theory, this quality of critique also requires self-reflection, humility, and a commitment to critical praxis—a groundedness in the grassroots.

This recommendation draws on work done by--and learning from the practice of—legal empowerment practitioners, activists, and scholars who work in this critical space. I have learned directly from many who practice what I call here a critical form of legal empowerment. For examples of this work, visit the Robert and Helen Bernstein Institute for Human Rights, Namati, Nazdeek, LEAH, Silicon Valley Debug, Beyond Legal Aid, Organized Communities Against Deportation, and the Justice Power Network.