For many, activism can be healthy and healing.

In this forum, many submissions have discussed the traumatic events that human rights activists witness or experience and the mental health struggles that can result. Yet very few people are speaking out about the benefits they derive from their activism—a sense of purpose, a strong identity, a common goal, a community. In some cases, human rights work can lead to stress and trauma. But in other cases, such as mine, it has been profoundly therapeutic.

As a teenager, I was supposed to spend time with friends, playing football and gossiping about girls. Instead, I often found myself behind a World War I bunker in my hometown of Pogradec, Albania, hiding from my peers, my family, and the world.

Over time, however, I slowly gained a better understanding of who I was, emerging from behind the bunker, until finally I recognized myself.

My depression grew over the next decade: I cried myself to sleep during the day, then battled tears by drinking in the afternoon. At night I stayed awake to write. Over time, however, I slowly gained a better understanding of who I was, emerging from behind the bunker, until finally I recognized myself. At the age of 27, I found the courage to come out to my family, to their shock and disappointment. I then met a kindred soul on Facebook, my now close friend and confidante, Xheni Karaj—the first lesbian I had ever met. 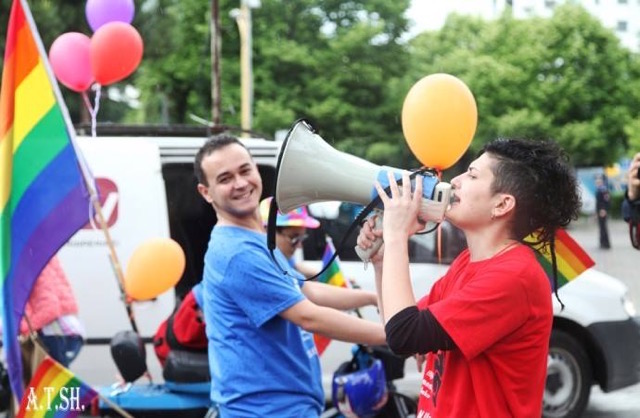 Xheni and I wanted to do something that mattered with our lives. We "activated" each other that day we first met in 2008. Over the next years we began to meet other like-minded people and started to gather on a daily basis, forming our own "group" without even noticing it.

This posed risks in Albania, a small and very conservative country that was just emerging from four decades of repressive and isolated rule, slowly opening to the world. The role of civil society was poorly understood and the rights of LGBTI people were unknown. On the contrary, fear, discrimination and even violence against our community was the norm. We saw this as a challenge and calling. After one of our passionate, late-night discussion sessions in 2011, we went out and painted sayings on the main streets of the capital, Tirana: “I am a boy and I am in love with a boy"; "I am a girl and I am in love with a girl."

Until that moment, few had dared to publicly express sexual orientation and gender identity in a society where most people consider homosexuality a disease. Painting the walls with love was an act to make ourselves feel better and a strategy to spark public debate.

The next morning, we recorded our graffiti and posted the footage on Facebook and YouTube. We returned to those spots a few weeks later to record the public reaction, but most of our declarations had been erased. That didn’t matter; the authorities could delete words from a wall, but they could not diminish our feeling of empowerment. And they cannot delete videos from YouTube where people can still watch. That year, we began to organize gatherings, street actions and underground parties for gays and lesbians. At one of those events, I met Erjon, who became my partner.

As I look back and compare today's reality with the situation five or six years ago, I can't help but notice a significant change. It took over 20 years for me to understand and accept myself, but in five years we helped to shift the political landscape in Albania and to create space for the LGBTI community. Xheni and I both came out publicly and now help lead the LBGTI movement in our country (Aleanca LGBT and Pro LGBT, respectively). Erjon's "diary" was the first human rights portal in the Albanian language, with thousands of visitors each day. The footage of our graffiti actions was made into a LGBTI documentary, which has won international acclaim.

Today, our organizations work across the country, lobbying for legislation and demanding accountability from politicians about our issues. The once underground parties have become much needed services for our communities, including the first residential center for at-risk, young and homeless LGBTI members.

High barriers remain, both to change government policy and the attitudes of people. High levels of discrimination remain, despite a modern anti-discrimination law, and Albania does not recognize same-sex marriage or civil unions. LGBTI activists still have to explain to relatives and friends why they do this work. I lost some friends and couldn’t talk with others for years. But things have gotten better: those friends who never came back were apparently not worthy of my friendship and those long talks with family members became the new foundation for stronger and unconditional relationships.

Although it was not easy, I used activism to overcome my mental and physical isolation. Suddenly, my fears were not mine alone; my struggle was not just mine; my loneliness was not just mine—all these challenges became shared. And rather than wear me down, the solidarity built me up.

I saved myself by projecting my struggle into a movement. Activism for human rights does not necessarily lead to mental hardship—it saved me and many others.

Kristi Pinderi is the Executive Director for ProLGBT in Albania.