The right to science influences everything from freeing wrongfully accused prisoners to crop rotation—but what happens when that right comes under threat?

On April 22, 2017 the March for Science will take place in Washington, DC and hundreds of satellite marches will be held around the world.  Changes in the socio-political and economic contexts in which science takes place are challenging the acceptance of scientific evidence as a basis for policy-making, commitment of governments to fund research, and abilities of scientists to communicate their work. As such, there is an urgent need to communicate the value of science as core to human well-being.

So, what exactly does it mean to have a human right to science?

Science, its methodologies, its processes, and the truths it can reveal, are vital to human rights.

Science, its methodologies, its processes, and the truths it can reveal, are vital to human rights. From the use of DNA to free wrongfully convicted prisoners to the analysis of satellite imagery in documenting the destruction of communities and cultural heritage sites in conflict zones, activists and researchers are increasingly using science and technology in support of human rights documentation, monitoring, and litigation.

In addition, as the world grows more complex and globally connected, science becomes more essential to the basic processes of democracy. The right to vote and the right to participate in public life have little meaning if citizens cannot evaluate policies and proposed interventions in light of scientifically rigorous assessments of both risks and opportunities. 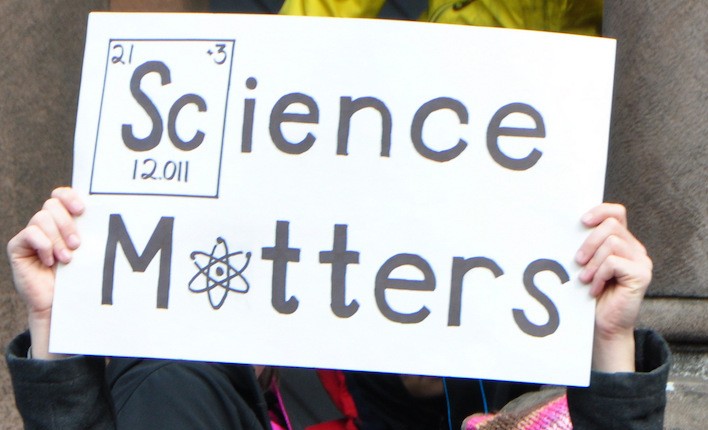 Protester at the Boston Rally for Science that took place in Feb 2017. For the right to science to have life, it is critical that its unique value in the human rights toolkit be explored, recognized, and articulated both by the scientific and human rights communities.

The right to science was first articulated in international law in Article 27 of the Universal Declaration of Human Rights, which recognizes the right to “share in scientific advancement and its benefits.” Article 15 of the International Covenant on Economic, Social and Cultural Rights elaborates on that right, addressing the responsibilities of governments to conserve, develop, and diffuse science; respect the freedom indispensable for scientific research; and encourage international contacts and collaboration in science. In addition to the right to science, Article 15 recognizes the right to participate in cultural life, and the moral and material interests of authors and creators.

Although nearly 70 years have passed since this right to science was first, the implications of the right and its meaning for individuals and governments have never been fully articulated. In 2007, when the AAAS established the Science and Human Rights Coalition, one of its primary goals was to bring the voices of scientists to this exact question: what does it mean to have a right to science? In the intervening years the Coalition has been engaging scientists, engineers and health professionals in the United States and overseas in an effort to bring their perspectives on the meaning of this right to an ongoing United Nations process of defining it. (The Committee on Economic, Social and Cultural Rights has committed to developing a General Comment on the right and appears well on the way to achieving that goal in the next 18 months).

Through these consultations, we’ve learned that the benefits of science are many. They go beyond medicines and crop rotation techniques, beyond electricity and the Internet, to include the scientific method and scientific information as the basis for empirical understandings of policies and programs.

Secondly, access to these benefits in practice means everything from access to the products of science and knowledge derived from science, to the access that scientists require to data and samples in order to conduct their research. As such, Article 15 provides a framework for supporting and defending the structures, the people, and the institutions that comprise the scientific enterprise. Scientists need to be able to share their findings and data, to travel and to collaborate internationally. They also need to be free from threats, harassment and persecution for doing their job.

As a person moves along the continuum from layperson to trained scientist, the risks associated with access (e.g., to data, to research subjects) increase.  Thus, access also must be correlated with scientific socialization—a person’s motivation, aptitude, and training in science and scientific methods. In order to create and sustain this kind of fluid and expanding access along a continuum, governments must provide adequate funding (and incentives for private sector investment), quality training and education (at the primary, secondary, and tertiary levels), and information communication technologies and infrastructure to support the diffusion of scientific information and knowledge.

As the United Nations Committee on Economic, Social and Cultural Rights further explores what the right to science means, it will need to address several sticky issues. Among them are: what are the tensions between conceptions of science as requiring technical, formal training and traditional knowledge? How can the right be used to assess and address potentially harmful impacts of technological developments? How can the role of the commercial sector in developing medicines and other products be reconciled with the government funding that underpins the research on which such products are based? How should the right inform articulation of legitimate limitations on scientific research and its applications?

For the right to science to have life, it is critical that its unique value in the human rights toolkit be explored, recognized, and articulated both by the scientific and human rights communities. The time is ripe to do that: the scientific community is increasingly engaged in discussions about its social responsibilities (e.g., do scientists have a responsibility to give priority to work/research that would have greatest benefit to society?); the pace of scientific and technological advance is outpacing our efforts to consider the human rights, ethical and legal ramifications of these advances (e.g., what is truly known about the potential human rights impacts of artificial intelligence?); and the scientific and human rights communities are partnering to an unprecedented extent in bringing the tools of science to human rights work (e.g., through technical collaborations using scientific methods and tools to document human rights violations). Both communities need now to bring their unique but mutually supportive perspectives to the promotion of the right to science and the realization of the benefits of science for society.

***The AAAS Science and Human Rights Coalition will next meet in Washington, DC on July 27-28 (live webcasting will be available). The theme for the meeting is the right to science. Registration will soon be available here: https://www.aaas.org/program/science-human-rights-coalition

Jessica M. Wyndham is the Interim Director of the Scientific Responsibility, Human Rights and Law Program of the American Association for the Advancement of Science