We have to stop pushing new refugee solutions without assessing where we have succeeded and failed so far.

In the ongoing debate on refugee protection, we risk pushing new solutions without properly considering where and why we have succeeded and failed thus far. Refugee protection as we know it has been creaking at the joints for decades. Millions of refugees and their children can ably testify that “protection” has frequently “warehoused” them as bodies to be fed and housed, in the process blocking their contribution to global society. Refreshing refugee protection resides in deep political and attitudinal shifts. Here I raise just three of the uncomfortable questions we need to ask.

Is UNHCR fit for purpose?

The protection regime is state-centric. Paradoxically, while UNHCR is intended to “ensure the implementation of 1951 in the spirit it was intended” rather than “implement its provisions”, it is itself a multi-lateral organisation serving the interests of states parties.

Although UNHCR provides important global conceptual leadership on refugee matters, states averse to oversight can quickly blunt its cutting edge innovations—such as the Alternatives to Camps policy. Country operations are frequently pressured to pursue non-confrontational relationships with host governments rather than risk key staff being declared persona non grata. In many respects UNHCR in-country, as is the case for OHCHR and other UN agencies, is both state-sanctioned judge and jury of state implementation. Under this arrangement they inevitably lack dentures, let alone teeth.

In addition, academic and civil society institutions are rarely invited onto the jury to scrutinise state implementation; rights watchdogs are often unwelcome. Refugees themselves are even less audible. Emily Fernandez is right to highlight the importance of domestic constituencies, but we must go further: women’s rights were not won by men, LGBTI rights were not won by straight people, and refugee rights will not be won by non-refugees. 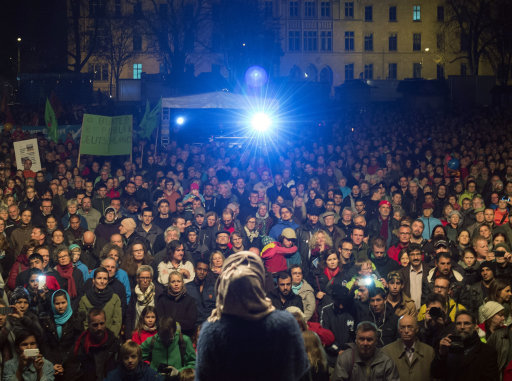 A Syrian refugee gives a speech during a rally in Germany condemning violence and demanding better integration of migrants. When it comes to debating state implementation of refugee policies, civil society—and even more often, refugees themselves—are left out of the conversation.

Do we even know what a refugee is?

In Uganda a refugee in prison is simply a “foreigner”; few prison officers know the legal definition and associated rights of a refugee. The current disappearance of refugees within a so-called “migrant crisis” in Europe is emblematic not just of a similar lack of knowledge of legal frameworks, but also of a long-standing data vacuum and inability to explain what is required for effective hosting of refugees.

The tendency is to reduce refugees to their biological survival needs rather than to rescue their actual or potential social capacities.

Wilfully misrepresenting refugees as “migrants” is particularly problematic in two areas: first, states and many humanitarian organisations consistently ignore refugees’ levels of trauma. Refugees who rightly say they seek a “better life” are thus generally assumed to be talking about improved economic circumstances, rather than a safer life that is free from fear and that enables them to re-establish social, emotional, political and economic potential that circumstances at home deprived them of. Second, most host countries equally erase the capacities that refugees do bring with them. UNHCR’s explanation that “Einstein was a refugee” notwithstanding, the general tendency is to reduce refugees to their biological survival needs rather than to rescue their actual or potential social capacities prior to and post-flight.

Self-reliance strategies often ignore specific interventions required to recover full socio-economic functionality, and fail to build on refugees’ existing skills. In some refugee hosting countries, self-reliance means PhD holders being given a small plot of land on which to plant beans. In others they get to drive taxis. This criminal waste of adult refugee potential is compounded by the discarded potential of their children, many of whom grow to adulthood in exile but have no place or belonging in their actual country of residence.  Unintentionally, therefore, refugee protection compounds the social and political fragmentation and economic dysfunction characteristic of conflict settings.

Are there really three durable solutions?

The existing matrix of “durable solutions” (voluntary repatriation, local integration into first country of asylum, resettlement to a third country) creates a comforting illusion of multiple options. Reality is much bleaker.

Many refugees cannot repatriate, either due to the protracted nature of the conflicts that drove them to flight in the first place, or because there are some places you simply cannot go back to; how many German Jews who sought exile in the US were expected to return to Germany after the war? Even where guns fall silent, post-conflict economic recovery can generally be measured in years. But the emotional recovery and related scope for combating impunity and reconciling with the past is measured in decades.

Local integration in the first country of asylum is frequently problematic; often physically too accessible to perpetrators from the country of origin to guarantee even minimal security, the host country may itself be implicated in the dynamics causing flight. Arguments from citizens and even humanitarians themselves that refugees should not enjoy more services than their hosts further erase refugee specificities and hold refugees hostage to an absence of good development practice.

For many refugees there is thus only one durable solution—resettlement. As states repeatedly remind us, however, this is currently a privilege not a right, and like most privileges, is available only to a tiny percentile of any refugee population.

Core principles of the 1951 Convention notwithstanding, an appraisal of how the world has changed in the intervening decades is necessary and raises further uncomfortable questions. For starters: What are the implications of the establishment of a multiplicity of regional blocs such as the Economic Community of West African States (ECOWAS), East African Community (EAC), Southern African Development Community (SADC), European Union and the like? What are the implications of global mobility for refugee security? Why, when the finger-print machines in Entebbe Airport in Uganda are the same model and make as those in JFK airport in the US, is it still so difficult for refugees to be issued with Convention Travel documents? Why, with the waxing of the BRICS and the waning of Europe and North America, are European Governments not thinking more strategically about the long-term benefits of hosting refugees—not just as a matter of principle but also as a politically astute guarantee of future diplomatic and trade alliances?

Legal reform alone cannot address failures to protect. These failures require a deep re-think about the nature of oversight and state accountability; a much more prominent role for refugees themselves, as well as their civil society allies; a much stronger understanding of specific refugee experiences and their implications for how refugees can—or cannot—integrate and realise their own potential. These require a political and attitudinal shift from seeing refugees as collateral damage that needs to be tidied up, to recognising refugees as a core indicator of failures of national and international economic and political governance. The durable solution impasse requires multi-locational solutions and definitions of home for multi-generational households.