When we think of forced displacement, we don’t usually think about the stateless. But we should.

When was it that you decided where to be born? When did you choose whom to be born to? Tell me, in effect, what it was that you did to merit the citizenship that you hold.

It’s a funny thing, this status we call citizenship. We don’t give it too much thought. We accept that when we are born we should be identified as belonging to a particular state through birth on its territory, or because we were born to someone who is a citizen of that state. We accept that birth certificates, passports, national identity cards and the like should serve to identify who we are and where we are from. We rarely question that these state-issued documents of belonging should condition our ability to obtain certain state services or to enjoy the rights, freedoms and protections that are associated with holding citizenship from one state over another. In effect, the web of “people ordering” that states have created to encompass the globe through their nationality laws and practices seems to work almost effortlessly.

Except when you fall through it. Then you realize how difficult it is to actually formally belong anywhere.

While the vast majority of us are citizens of somewhere, an estimated 10 million people worldwide are not. They are stateless and face some of the most debilitating problems you can imagine. A stateless person is unlikely to be able to open a bank or library account, get a credit card or cell phone, buy a house or car, apply for a job or a loan, receive social security or a scholarship, travel overseas or register the birth of a child. The kind of activities that we take for granted as citizens of “somewhere” can become insurmountable obstacles when you belong nowhere.

Statelessness can also place a person in the highly precarious position of being vulnerable to a host of other human rights violations.

In some cases, statelessness not only translates into a lack of citizenship or a legal identity, but it can also place a person in the highly precarious position of being vulnerable to human trafficking, indefinite detention and a host of other human rights violations. That is, if you are unaccounted for, if you do not have a state that can extend diplomatic protection or to which you can be “returned”, the world becomes an exceedingly hostile place.

To be stateless, then, is to be bordered in a thousand other ways.

So how did we get to this place where some people are noncitizens everywhere? While the result is everywhere the same—formal exclusion from belonging to a state—the paths to this point are many. In some cases, people are born into statelessness. They might be born in a country that does not allow citizenship through birth on its territory, and their parents, for any number of reasons, are unable to pass on their citizenship through descent. Maybe they inherited statelessness from parents or grandparents who were unable to register themselves as citizens. Perhaps they were born in a country that refused to recognize them as citizens at birth—even though the law said they should be—because they were of a different skin color, ethnicity or religion to the majority population. Or maybe they were born to a mother who is a citizen of a country that continues to discriminate between men and women in the right to pass on nationality to their offspring.

It could be that an individual is rendered stateless later in life. Perhaps they were born in a state that ceased to exist, but has instead become a series of other states, none of which wants to recognize the person as a citizen. Maybe an individual goes to renew a passport or get some other state-issued identification and the state official, after taking whatever that proof of citizenship is, refuses to issue the other identity document and does not give the person back her or his original documents. Or maybe some law strips a woman of citizenship when she marries a foreigner and, unable to secure citizenship in the country of her husband, or having lost it upon divorce, she now formally belongs nowhere. 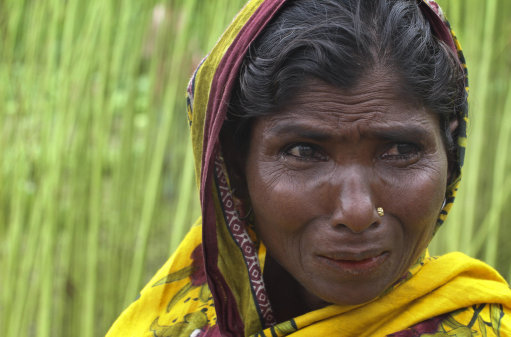 A woman weeps after a resolution between Bangladesh and India allowed tens of thousands of residents--who were left stateless by the poorly defined border between to two nations--to choose their citizenship.

What might not be so readily apparent, however, is that these people are being forcibly displaced. They are made stateless. When we typically think about forced displacement, images of people fleeing their homes—whether within their state’s borders as internally displaced persons (IDPs), or across borders like refugees—often come to mind. We think of camps, conflict or crisis of one kind or another and the need for humanitarian aid. We don’t think about the stateless.

But maybe we should.

Just like other forcibly displaced persons, stateless people are displaced from a home. Through no choice of their own, they are made to exist in the netherworld of formal exclusion from the state whose territory they were born into or reside upon. The stateless’ ability to be self-determining agents is severely circumscribed. Their susceptibility to rights violations and impingements upon their freedom is pervasive. Their reception by the societies in which they live is often hostile. They are, in effect, displaced in place.

Unlike IDPs, refugees or other forced migrants, however, the majority of stateless people are non-movers. Most continue to reside within the state of their birth, even though the latter denies or deprives them of citizenship. They cannot point to a “national home” where they are formally recognized as belonging. The psychological implications of never having belonged anywhere—or of having one’s citizenship taken away later in life—can have a tremendous impact on the stateless’ psyche, identity and self-worth.

The displacement the stateless face then is no less real, and no less debilitating, than that of other forcibly displaced persons. But because the means by which the stateless are forcibly displaced—gaps in nationality laws, inefficient bureaucratic procedures and registration failures, among others—lack the “emergency” nature that we typically associate with forced displacement, their plight often goes unnoticed. Where’s the (visible) crisis?

Also, because democracies and non-democracies alike create this type of forced displacement, we do not recognize statelessness as a human rights and a human security problem even when it exists in our midst. Democracies do not forcibly displace people, do they? The stateless thus become doubly displaced: once from the realm of formal belonging to a state and then, secondly, from our vision of people who need support.

Maybe if we understand statelessness for what it is—a form of forced displacement that occurs in place—we can correct our myopia and dedicate the necessary attention and resources to addressing the needs of the stateless, just as we do for other forcibly displaced people.

This article highlights aspects of the author’s most recent publication: Belton, K.A. (2015) Rooted displacement: the paradox of belonging among stateless people. A version of this piece was first published on Discover Society.

Kristy A. Belton is a postdoctoral fellow at the Human Rights Center of the University of Dayton. She has been working and publishing on statelessness for over a decade and is the recipient of the United Nations High Commissioner for Refugees 2015 Award for Best Doctoral Research on Statelessness.