Coming together, or falling apart?

International human rights groups are a big help when developing transnational norms; decentralizing these NGOs risks robbing them of their key strength.

The idea of creating a more cohesive global human rights movement seems to have galvanized a wide range of activists. As a number of contributors to this openGlobalRights debate have noted, rights groups in the global South tend to represent specific interests, while northern-based groups usually defend universal principles. Northern NGOs struggle to serve these ambitious mandates, however, and promote the expanding number of causes under the human rights umbrella. As a result, several leading Northern NGOs are attempting to reorganize their sizable operations to reflect a more “international” profile.

Yet the idea of internationalizing northern human rights NGOs is problematic for at least three reasons. First, there is no consensus on what a truly transnational human rights NGO looks like. If groups such as Amnesty International and Human Rights Watch are not already the most “international” of all, then who is?

Second, many characterize the northern roots of international NGOs as a liability. Uprooting them from their traditional bases in the US and Europe, however, risks robbing them of their key strength—their access to wealthy donors and powerful governments. 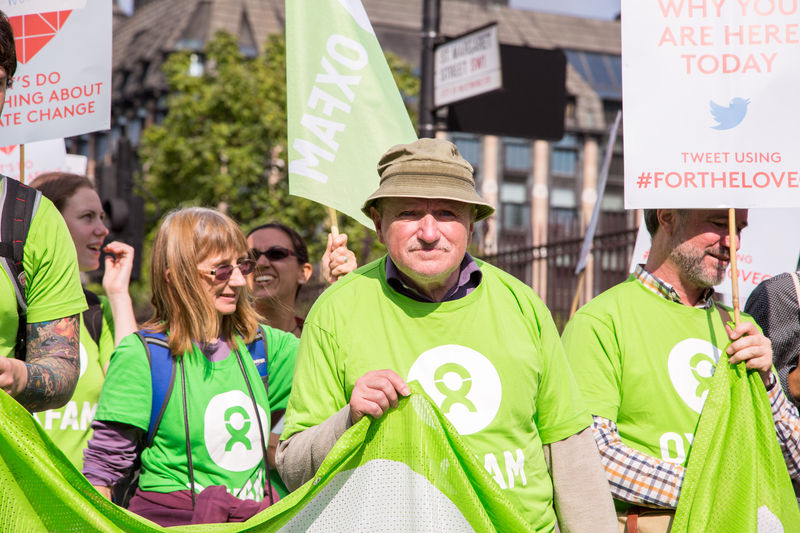 Oxfam marchers at a recent climate march in London. Uprooting northern NGOs from their traditional bases in the US and Europe, risks robbing them of their key strength—their access to wealthy donors and powerful governments.

Finally, decentralization of northern NGOs is not a value-free process in which key organizational tasks are handed from the US and Europe to Africa, Asia and Latin America. Instead, it is likely to involve the export of specific organizational practices from north to south in a way that may threaten the diversity of human rights approaches.

Internationalization is not unique to the human rights NGO community. Instead, international NGOs across several sectors—including environmental protection, humanitarian relief and global development—are reworking their global structures to better incorporate southern voices, and perhaps also to save money. But these processes have yielded vastly different organizational forms as these groups try to “build the boat while sailing it.”  In the global development sector, internationalization has proceeded in piecemeal fashion, as powerful national chapters of these NGO families have been asked to give up control in new organizational structures that are yet unproven.

Given that NGO reform is so onerous, let’s revisit the question: why is it so necessary? Northern NGOs across multiple sectors have been called to demonstrate their value-added, as southern-based organizations are increasingly capable of raising their own funds and running their own programs and campaigns. Being based in London or New York or Paris, it appears, impedes the credibility of northern NGOs’ claims to defend global causes.

The networks of elite board members and supporters behind these powerful northern NGOs can help them reach policymakers, even if these organizations have failed to build grassroots support for the human rights cause.

Yet if northern human rights organizations are imperfect instruments for representing the many groups suffering grievance, they are still very useful tools in promoting human rights. The media attention concentrated on these groups can give them a platform for raising new issues. The networks of elite board members and supporters behind these northern NGOs can help them reach policymakers, even if these organizations have failed to build grassroots support for the human rights cause. The deep roots of Oxfam in Britain, or of Human Rights Watch in the US, are in fact huge assets for transnational activists looking to change the trade, aid, and diplomatic policies of these powerful states.

As practitioners and scholars have noted, there may be a tradeoff between inclusiveness and effectiveness, and successful NGO decentralization risks diluting its unique influence. The NGO Friends of the Earth (FoE), for example, has embraced a confederation model that equally balances southern and northern concerns. The confederation has no clear set of global priorities, however, and many of its affiliates do not even use the brand. FoE may be an effective forum for internal debates on sustainability but a weaker advocate for global causes.

Finally, as these northern NGOs seek to change where and how they gather information, write reports and run campaigns, it is important to recognize that their point of reference will be their prior models of organizational practice. There is a real risk that these practices will be forcefully exported into their newly established offices in Johannesburg, Rio de Janeiro, and Moscow. From Bolivia to Bangladesh, local NGOs dependent on northern support already risk adopting organizational practices that distance them from their own communities. Having powerful NGOs establish an even larger organizational presence in the global South may well intensify these pressures.

Of course, the North/South dichotomy overlooks a wide range of different practices among northern human rights groups. There is no consensus among western industrialized democracies, much less around the world, about the content of the human rights agenda. Seemingly basic questions—about whether access to medical care is a human right, for example—have no clear answer among northern states, as experiences in the United States and Europe demonstrate. Groups like the International Federation for Human Rights (FIDH), Amnesty and HRW have very different strategies and structures, despite all being based in the north. This new focus on “going south” ignores the fact that these groups are by no means uniform.

Inequality in financial resources or political attention among NGOs may be morally objectionable, but to deny those underlying realities is to fail to employ the best tools. Human Rights Watch and Amnesty International are northern NGOs that defend a specific set of concerns. The way forward is not to uproot these narrowly effective organizations in vain hopes of building some mythical, globally representative human rights “peak association”.

Rather, Amnesty and Human Rights Watch must facilitate flows of resources and expertise to build the capacity of southern-based groups. In fact, given changing patterns of global wealth and power, this redistribution of money and attention may emerge regardless of whether powerful NGOs support it or not.

Internationalizing human rights organizations – why, how, and at what cost?