In China, new laws make fundraising even harder, but the LGBTQ community is getting creative.

Compared to only a decade ago, the visibility of LGBTQ issues in China has significantly improved. The Chinese mass media are now more likely to cover LGBTQ issues in a positive and comprehensive way, and members of the LGBTQ community are increasingly coming out and telling their life stories. In addition, in recent years community members have filed a series of lawsuits to defend their civil rights and challenge existing legal systems. After over two decades of hard work by activists and the entire LGBTQ community, there are now at least 190 LGBTQ organizations and networks across China.

However, beyond the vibrant surface, LGBTQ organizations are faced with two major problems: financial sustainability and legal status. First, due to deeply social and political stigma of homosexuality, the resources that the LGBTQ community historically have had access are scarce. The first wave of international funding on HIV/AIDS programs helped to incubate the initial batch of gay and lesbian civil society organizations (CSOs) in China, especially gay organizations working in health issues. However, the vast majority of the limited foreign funding available for the LGBTQ movement continues to be concentrated in Beijing, and donors tend to focus on supporting a select few, familiar organizations. Indeed, these organizations were the most directly affected by the implementation of China’s Law on the Management of the Activities of Overseas NGOs within China (FNGO Law), which came into effect on January 1, 2017. They and other CSOs now face potential legal risk if they accept foreign funding under the new law. And in December 2016, the Ministry of Public Security of PRC released the Guideline for Overseas NGOs and the 2017 List of Working Areas, both of which further control and regulate the activities of international NGOs in China.

Map source: http://maps.foundationcenter.org/home.php. According to Foundation Center located in New York City, until 2015, the total dollar value of grants on LGBTQ issues in China was $ 2.4 million, of which $1.9 million flows into Beijing, the capital city of the country.

Yet beyond the landscape of the well-resourced Beijing organizations and their traditional business models, there are hundreds of locally-based CSOs working on long-term change emerging and developing creatively across China. From creating shared spaces to intentionally advocating to the public, the increasing number of community-based LGBTQ CSOs now offer new potential to create social change sustainably through building genuinely pluralistic and participatory approaches to governance.

LesGo, which I founded in 2010, is one such organization. It is an entirely volunteer-based LGBTQ organization in eastern China. Although we have recently applied for funding, we haven’t received any donations from foundations in the past. First, due to a lack of networking relationships with international foundations and a shortage of staff with qualified proposal writing skills, it was difficult for us to obtain foreign funding.  Second, because we focus on direct services and long-term cultural education, the results are difficult to assess, which makes international donors less likely to engage. It has been the same situation for many other LGBTQ organizations. 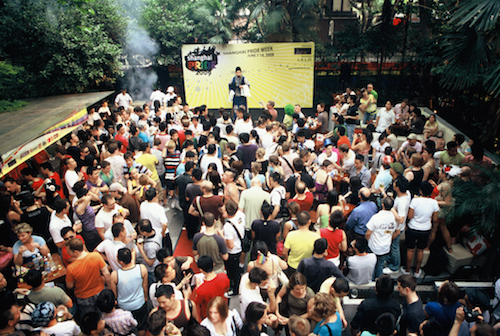 A gay pride celebration in Shanghai. Compared to only a decade ago, the visibility of LGBTQ issues in China has significantly improved.

The social and political stigma also brought the legal status of LGBTQ groups into question. NGOs and CSOs can be registered as three types of organizations—social groups, social service organizations (previously called “private non-enterprise units”), and foundations, subject to two regulations: any organization is subject to the review of a “governing unit” (i.e., a governmental agency) and they must be approved by a government department. Both of these are highly problematic when sexual minorities are still treated as violating “traditional Chinese culture and the social construction of morality”. Although the Charity Law of 2016, which implemented new rules for registration and fundraising, brought the two above regulations under review, it is still difficult for LGBTQ CSOs to obtain legal registration because their work doesn’t obviously fit in with any type of “public interest activities” provided in Article 3 of that law. Even worse, the status and some activities of many LGBTQ CSOs could turn from uncertain to illegal. For example, under the new Charity Law, public fundraising should be conducted only by charitable organizations certified by the government. This means that uncertified individuals or organizations could be penalized for fundraising activities.

As a result, we have had to get quite creative in both our funding and strategic models. We have focused predominantly on mobilizing resources and innovation from volunteers. We also have focused on projects and collaborated with media, businesses, academic institutions and even government agencies, which in turn has helped us to attract more volunteers and resources. For example, inspired by the Vagina Monologues, we created an original stage play that has been running for the last two years and was featured in the mainstream media. Many audience members of this work have subsequently been inspired to become new playwrights, actors, venue providers, and funders, and many of them have become our long-term volunteers.

Technology is also paramount in our work, as we use apps and social media to promote our events, host meetings and receive donations. For example, we are working on opening live broadcasts on Rela, the most popular lesbian social media app in China. Similar to the function of “Live” on Facebook, the live broadcast on social media is broadly popular in China, especially among young people. Recently, we opened a weekly live show named “Meeting Everyday”, hosted by two transgender volunteers. We are also planning to open live classes to educate the public about gender diversity and social justice on Zhihu, a popular interactive online forum in China. This use of social media, including crowd-funding, has allowed us to diversify our funding sources and amplify the impact of our work.

By mobilizing the power of youth and technologies, we don’t treat funds as a means to an end. Instead, we develop financial models integral to the mission of our organization: to build an equal, inclusive and diverse world where LGBTQ people, especially women, live an autonomous life. These approaches help us to alleviate shortages of funding and uncertain legal status.

The enactment of the FNGO Law and Charity Law casts challenges to NGOs, but the change also provides tremendous opportunities. As the second largest economy in the world, China has accumulated vast wealth in society and the government is mobilizing the shifting of wealth into philanthropic areas through new laws. As of January 22, 2017, there were 5,551 foundations across China with net assets of 118.8 billion yuan (as of the end of 2015). Faced with losing foreign funding, an increasing number of LGBTQ CSOs have been successfully collaborating with certified domestic charitable organizations to crowd-fundraise, such as Lalasvoice, a lesbian-led LGBTQ organization located in southern China.

As the global political landscape shifts, we have thousands of reasons to be pessimistic about the future of human rights. However, as Joan Walsh Anglund once wrote and Maya Angelou famously quoted: “A bird does not sing because it has an answer; it sings because it has a song.” We need to recognize that we fight for human rights not because we will get the success in our lifetimes, but because we believe in the song in our heart.

Hou Ping is an attorney-at-law, as well as an LGBTQ and women’s rights activist from China. She founded an entirely volunteer-based, women-led LGBTQ organization in eastern China. She was a 2015-2016 international fellow at PILnet: The Global Network for Public Interest Law. Currently, she is a visiting scholar at the Center for Gender and Sexuality Law in Columbia Law School.