Extreme inequality directly undermines human rights, and is a cause for shame for the human rights community.

A world in which the richest 1% owns 48% of global wealth, and in which this imbalance continues to accelerate, is obscene. Radical inequality inevitably sustains extreme poverty just as surely as it sustains extreme wealth. And extreme poverty is best defined as a condition in which the vast majority of human rights cannot possibly be realized. In other words, inequality is not just as an economic issue, but also one of human rights.

International economic actors like the World Bank, the International Monetary Fund (IMF), the World Trade Organization (WTO), and the Organization for Economic Cooperation and Development (OECD) have begun to speak about the negative economic consequences of such inequalities. Yet it is no coincidence that these are the very same organizations that steadfastly resist policies that will factor human rights into their policies and programs. Of course, it is not so much the organizations themselves that are to blame, but the governments that control them. It is telling that, when economic and financial issues are raised in the Human Rights Council, someone invariably makes the argument that it is not the appropriate forum and these matters should be dealt with elsewhere. And when efforts are made to raise human rights in the economic forums, the same governments insist that these issues be addressed in the Human Rights Council. They seek, in other words, to silo off issues that are deeply intertwined.

Extreme inequality should also be seen as a cause for shame on the part of the international human rights movement.

Extreme inequality should also be seen as a cause for shame on the part of the international human rights movement. Just as global economic institutions have eschewed human rights, so too have the major human rights groups avoided tackling the economics of rights. These lop-sided and counter-productive institutional choices should not, however, be conflated with the actual structure of human rights law. It is patent nonsense to claim, as Samuel Moyn does, that “even perfectly realized human rights, are compatible with … radical inequality,” or that human rights “have nothing to say about inequality.”

Economic and social rights are a core part of human rights and we should be careful not to equate the determined effort made by the United States over several decades to deny and undermine the status of these rights with the realities outside the US. Human rights bodies interpreting the norm of equality have long emphasized that formal equality is not an adequate substitute for the kinds of substantive equality that is required by human rights principles, even if there is no freestanding “right to equality”, as such, in human rights law.

Even in the realm of civil and political rights, there is a growing realization that the capture of the political process by the extreme rich, a trend that has long been frowned upon when it occurs blatantly in developing countries, is now a very real threat in developed countries, including the United States itself.

These developments should be heard as a clarion call to the human rights movement. Questions of resources and redistribution can no longer be ignored as part of human rights advocacy. The leading human rights NGOs, including Human Rights Watch and Amnesty International, need to overcome their deep reluctance to factor such issues into their research, analysis and advocacy. The result of their current failure to do so is that, for all of their excellent work in exposing the magnitude of a specific range of civil and political rights violations, the deeper structures and systems that sustain extreme poverty and ignore extreme inequalities are effectively left in place. The status quo thus effectively remains untouched. 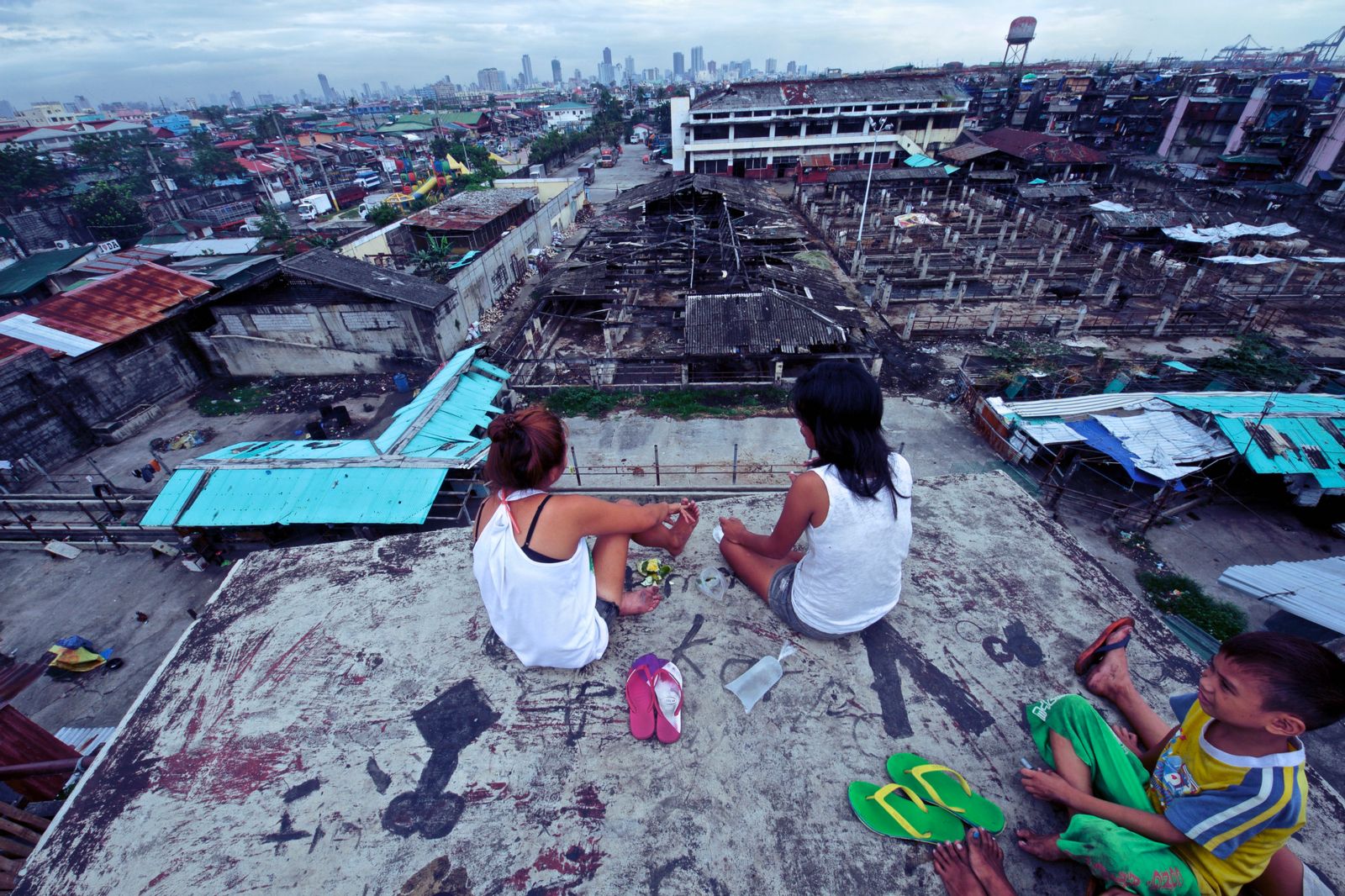 Filipino youths view downtown Manila from a rooftop in a poorer neighborhood.

Linked to this is the need for human rights proponents to reflect more deeply on the relationship between resources and the nature of the obligation to ensure respect for civil and political rights. Existing approaches have all too often been premised on the delusion that resource considerations are not relevant in evaluating governmental compliance with the relevant international obligations. As a result, questions of the availability of resources and equality of access to those resources have largely been eliminated from the most vibrant parts of the international human rights system, and relegated instead to the minor league discussions about economic, social and cultural rights. In the latter context, ironically, they were given overwhelming importance, such that the qualification contained in the International Covenant on Economic, Social and Cultural Rights—that a state’s obligations extended only to the maximum of its available resources—is often invoked to excuse abusive instances of non-compliance.

More generally, the human rights community needs to address directly the extent to which extreme inequality undermines human rights. One starting point is to clearly recognize that there are limits to the degree of inequality that can be reconciled with notions of equality, dignity and commitments to human rights for everyone. Governments should formally commit to policies explicitly designed to eliminate extreme inequality. Economic and social rights must become an integral part of human rights programs. A concerted campaign to ensure that every state has a social protection floor in place would signal a transformation in this regard. That concept—initially elaborated by the International Labour Organization, subsequently endorsed by the UN and now even by the World Bank—draws upon the experience of a range of countries around the world that have successfully tackled poverty in terms of programs with universal coverage, formulated in terms of human rights and of domestic legal entitlements.

Finally, the realization that tax policy is, in many respects, human rights policy—a concept long championed by vanguard organizations such as the Center for Economic and Social Rights—needs to be embraced by the human rights community at large. The regressive or progressive nature of a state’s tax structure, and the groups and purposes for which it gives exemptions or deductions, shapes the allocation of income and assets across the population. This unavoidably affects levels of inequality and human rights enjoyment. Appropriate redistributive measures through fiscal policies are indispensable for ensuring full respect for human rights.

Far from having little to say about economic inequality, human rights demand that states reject extreme inequality and formally commit themselves to policies explicitly designed to reduce if not eliminate it. Such policies must take economic, social and cultural rights into account as seriously as civil and political rights. They must ensure social protection floors and fiscal regimes aimed at reducing inequality and realizing rights for all. If the human rights movement is to spur states to adopt such an agenda for equality, it will need first to correct its own gaps and biases, including by revitalizing normative understandings of equality, and putting questions of resources and redistribution back into the human rights equation.