For the first time, a UN body has decided the case of a climate migrant, and in doing so strengthened the duty on states to address climate change because it poses risks to the right to life. 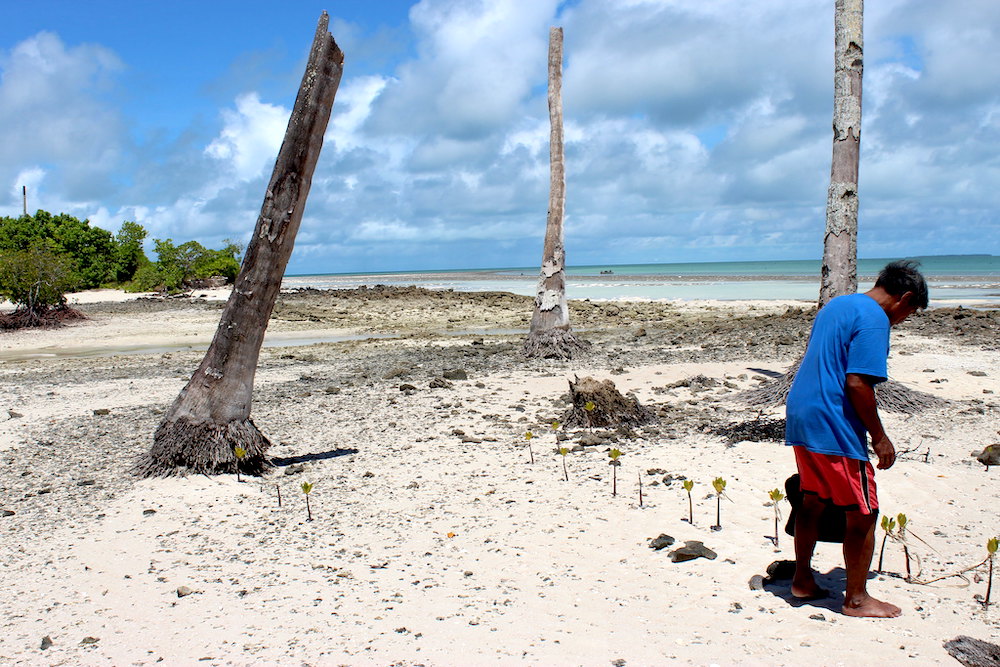 A man plants mangroves as part of a coastal rehabilitation project in Kiribati. DFAT/Flickr (CC BY 2.0), Modified

In what could prove, eventually, to be a path-breaking decision, the UN Human Rights Committee (the Committee—it monitors state compliance with the International  Covenant on Civil and Political Rights - ICCPR) has suggested those fleeing life-threatening climate change may be entitled to protection against forcible return (non-refoulement). The decision concerned a case in New Zealand, of Mr. Teitiota, a man originating from the climate-stressed Pacific island nation of Kiribati. This first international scrutiny of the human rights of an individual affected by climate change was bound to raise expectations. But the decision does not live up to sensational headlines claiming that it ‘paves the way for climate refugees’.

Certainly, the issues at stake went far beyond what could be addressed in response to an individual claim before a body with limited powers that can only provide its “views” on such cases. The more sobering bottom line was that the Committee approved the New Zealand authorities’ decision to deport Mr. Teitiota back to Kiribati, without demanding much in terms of immediate legal or policy change. However, this should not obscure the broader implications of this decision, and how these might impact legal developments and advocacy strategies concerning human rights approaches to combatting climate change.

The Teitiota decision marks a step forward for human rights-based approaches to climate change, as it shows the Committee’s willingness to consider addressing the harms of climate change as encompassed within a state’s duty to protect the right to life, under the ICCPR. The Committee had recently developed its analysis of this duty to include protection from social, economic and environmental harms. In its recent General Comment (an authoritative opinion it gives on how to interpret the Covenant), the Committee said states are required to take action to confront “general conditions in society”, including environmental degradation, “that may give rise to direct threats to life or prevent individuals from enjoying their right to life with dignity”. In a subsequent case the Committee found the death of a peasant farmer from exposure to pesticides, as well as his family’s severe illness, to be violations of the right to life. In the Teitiota case, the Committee explicitly recognized the effects of climate change as a potential source of violations of the right to life. This implies a state duty to protect individuals from climate change-related harms, which are even further causally removed from human agency than, for example, pesticide contamination. This finding lends further support to the framing of climate change impacts as threats to universally recognized fundamental human rights, in line with trends in domestic climate litigation worldwide.

The Committee explicitly recognized the effects of climate change as a potential source of violations of the right to life.

In the context of climate migration, the HRC’s views on 'climate non-refoulement' can also be seen as a wake-up call to states, though perhaps one which advocates will need to amplify. ‘Climate non-refoulement’ would entail a potential obligation not to deport anyone to a country where they will face  a serious risk of irreversible harm from climate change impacts. In the present case, the Committee found that the situation in Kiribati did not yet pose a sufficiently grave risk to the petitioner’s life, and so did not yet warrant a conclusion that his deportation had been manifestly unjust. However, they recognized that states may be obliged not to deport climate migrants in future if conditions in their home countries worsen as a result of climate change. They said that such a situation may prevail “without robust national and international efforts”, thus highlighting States’ responsibility to meet their commitments on climate change mitigation and adaptation to avoid this situation. This appears to align with the position of small Pacific island states, which advocate primarily for a preventative and adaptive approach, and view recognition of ‘climate refugees’ (and, it can be supposed, ‘climate non-refoulement’) as a last resort.

The decision does not live up to sensational headlines claiming that it ‘paves the way for climate refugees’.

Regarding the current approach to climate migrants, the Teitiota decision implies that destination states assessing similar claims need to keep monitoring and assessing climate-related risks in countries of origin, to determine whether they reach the high level required to trigger non-refoulement obligations. However, the Committee’s warning of potential future, 'climate non-refoulement' obligations can hopefully boost efforts towards proactive, collective solutions for people at risk of cross-border climate displacement, in line with states’ commitments in the Global Compact for Safe, Orderly and Regular Migration.

In terms of its relevance to other climate-related human rights claims, the decision overall sets a constructive precedent - particularly for cases within the UN treaty body system, such as the Torres Strait islanders case and the Children vs Climate Crisis claim. It is important to note that while the Committee did not find any violations in the Teitiota case, it was looking at a deportation decision where the individual had to show he faced irreparable harm, and that the domestic authorities’ decision to the contrary had not been clearly arbitrary or unjust. In broader human rights claims which aim to engage states’ responsibility for failing to take appropriate measures against climate change, these thresholds will most likely not come into play. Treaty bodies will have to directly consider whether states’ (in)action on climate change constitutes a failure to protect human rights. The Teitiota decision’s recognition of climate change as a potential threat to the right to a life with dignity, gives grounds for an affirmative answer.

Although the Committee did not deliver results for the claimant and is apparently modest in its immediate implications for states, it does bring a positive contribution to rights-based climate and migration debates. While its message may still be couched in conditions and speculation, it does provide climate and human rights advocates leverage to achieve broader goals.

Deborah Casalin is a PhD candidate at the University of Antwerp, Faculty of Law, Law and Development Research Group.