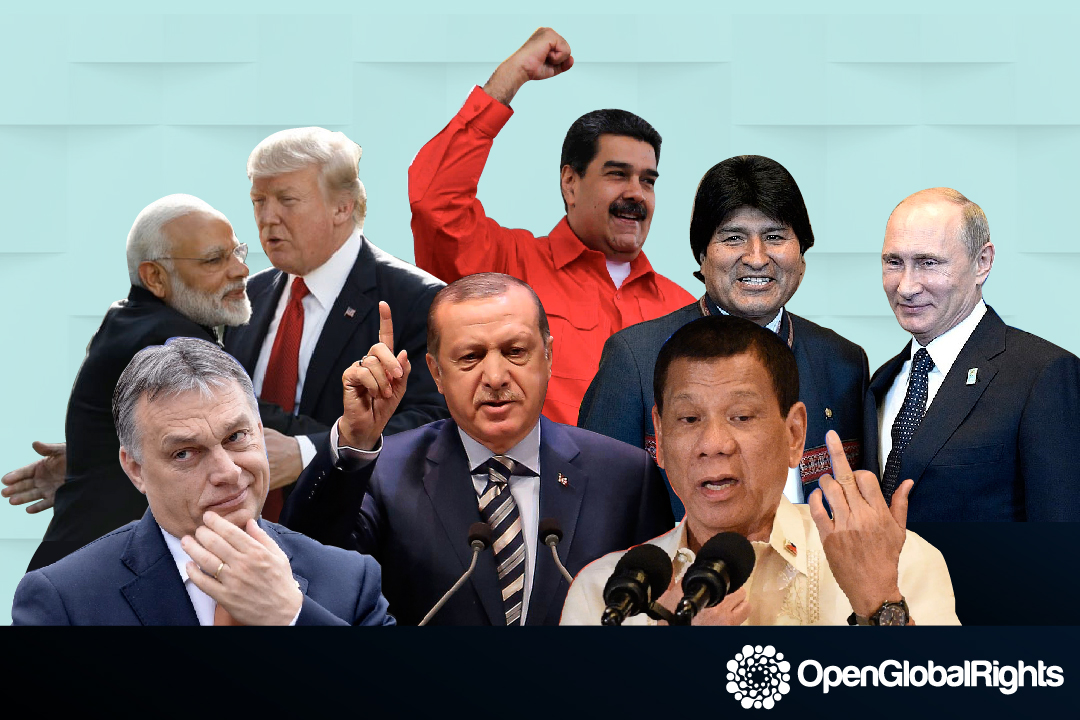 Many of the measures against human rights—for example, smear campaigns—are not new, the attacks are now coming from elected governments, as opposed to the dictatorships of the past.

The proliferation of populist governments and movements creates serious risks and challenges for human rights around the world, from India, Venezuela, and the United States to Turkey, Hungary, Russia, and the Philippines. However, the rise of such governments could have unexpected positive effects: pushing the human rights movement to make changes in its architecture and strategy that were imperative before and are urgent now.

Before the decline of the global Anglo-American order—reflected in Brexit, the election of Trump, the proliferation of illiberal nationalisms across the world, and the increasing influence of Russia and China—the answers that many analysts and practitioners in the human rights movement offered tended to be grouped into two extremes: skepticism and defensiveness. The skeptics announced the “end times” of the international project of human rights, based on a view that human rights were imposed by Euro-America. Given this view, the end of Pax Americana would also be the end of the movement. The skeptics’ view is equally thought provoking and inexact, as it forgets that this regime was built in part with the ideas and the pressure of states and movements of the global South (e.g. American Declaration on the Rights and Duties of Man in 1948 and postcolonial movements in the 1960s).

Recognizing, however, the history and accomplishments of the movement does not imply that the dominant tactics in human rights, under the Euro-American order, are without serious flaws. Nor does it imply that, with the decline of that global order and the tribulations of liberal democracy, the conventional tactics will be any more sufficient or effective than they have been of late.

In a multipolar world, the old “boomerang” approach of appealing to Washington, London, or Geneva so that Northern governments would pressure their global South counterparts to comply with international human rights standards was already losing its effectiveness. With populist leaders stoking nationalism and violating the basic rights of vulnerable groups, such as religious and racial minorities both in the North and the South, the limited effectiveness and legitimacy of “naming and shaming” strategies focused on the traditional centers of power have been further eroded.

Moreover, the proliferation of illiberal democracies puts considerable pressure on the fault lines and blind spots of the contemporary architecture of the human rights field. Populist leaders have learned to exploit such weaknesses of the human rights architecture and strategic repertoire, including the overreliance on international funding and the asymmetric power balance between international NGOs (INGOs) and global South organizations, among others. That is why the second response—the defense and reinforcement of the status quo of the movement—is equally ill-advised to confront the rise of illiberal democracies, populist or otherwise.

Though many of the measures against human rights—for example, smear campaigns—are not new, the attacks are now coming from elected governments, as opposed to the dictatorships of the past. Further, these contemporary populist regimes are not confined to a particular political or economic ideology, but rather, as scholar Jan Werner Müller argues, embody the combination of two particular traits: anti-elitism and anti-pluralism. These leaders make a moral claim as radical as it is exclusionary: only one part of the population counts as “the real people,” while the others are seen as enemies of the people. Who exactly constitutes “the elite” and “the real people” depends on the particular socio-political context and power play between relevant sectors of the population. For example, in Brexit’s Britain, “the elite” were the European Union bureaucrats and London financiers who, in the view of Brexit populists, sold the idea of the membership of the UK in the EU in order to enrich themselves. Oftentimes, human rights advocates are portrayed as part of this elite group, and thus fit squarely within the basic populist moral logic of “Us versus Them” that goes directly against the basic tenets of human rights.

The challenge comes in the form of political narratives, legal reforms, and coercive measures aimed at eroding one or both of two things: the legitimacy and efficacy of human rights actors and civil society more generally. Altogether, the result has become a “global war against NGOs,” whose script seems to follow an unwritten playbook of restrictive measures shared between these leaders. These include primarily five types of actions: 1) restrictions on foreign funding for NGOs; 2) smear campaigns; 3) restrictions on fundamental rights that strike at the heart of the work of independent media and NGOs; 4) severe burdens on operational capabilities of human rights actors and civil society at large; and 5) co-optation of sections of civil society.

This playbook crosses the geographic and ideological divide, as human rights actors and NGOs in all corners of the world face similar measures impeding and undermining their work. For example, since 2012, 98 countries passed laws restricting civil society space, 36% of which dealt with foreign funding. Further, countries as distinct as Russia, Turkey, Cambodia, and Venezuela have accused local NGOs and activists of plotting against the state and fomenting conspiracy as foreign agents. These governments utilized other shared strategies with even more severe effects, including limiting the essential rights to life, liberty, association, and expression that advocates both fight for and rely on for their very existence.

Evidently, the populist challenge has contributed dramatically to this rising sense of a “crisis” in the field. However, the concomitant longer-term changes in geopolitics, technology, and demography have likewise created new challenges for the movement. Faced with this uncertainty, it is high time that the movement undergoes reflexive reconstruction. The human rights community needs to learn from and respond to the crackdown on civil society and activists to reinvigorate new ways of thinking about and practicing human rights. A recent book we have edited on the subject, and on which this article is based, Rising to the Populist Challenge: A New Playbook for Human Rights Actors, considers a fresh diagnosis on the erosion of democracy and rights and collects a repertoire of responses written by human rights scholars and advocates to contribute to a new playbook.

Based on our previous action-research work and the contributions of activists and acedemics to this volume, we posit that the new playbook will need to put less emphasis on traditional naming and shaming strategies, and instead connect with new constituencies including by appealing to emotions, values and the public imagination, combine online and offline mobilization, and develop horizontal forms of collaboration between global North and global South organizations. Further, fostering a spirit of innovation, including by incorporating other movements, sectors, and disciplines, can help the movement go beyond the traditional tools of human rights advocacy and successfully adapt to the new, hostile circumstances.

Ideally, human rights analysts and practitioners would have addressed the weaknesses in the field and developed a new strategic “playbook” in times of relative normality. Now we will have to do it in extraordinary times. However, the novel strategies and narratives presented in the volume demonstrate that these times of turmoil can in fact be moments of immense creativity, innovation, and overall, hope.