Given the toxic politics of Farage, Johnson, Le Pen and Trump, will human rights be enough to resist right-wing nationalism in the wake of Brexit?

Brexit holds little good news for human rights. They were hardly mentioned in the referendum campaigns—not even to gloat that leaving the EU would let the UK remove itself from the Charter of Fundamental Rights. For the Leave campaigners this was doubtless because human rights are low down (but still on) the list of things they love to hate. For Remain, one assumes, it was tactics (rather than indifference). Human rights are not a vote winner—they rank with immigration, EU bureaucrats and climate change science among the things Leavers see as a threat to the British way of life. Raise human rights and petty nationalist Nigel Farage, leader of the right-wing UK Independence Party (UKIP), would refer you to rapists who get to vote and terrorists who cannot be deported. The Sun, the Daily Mail and the Express, media geysers spouting hate, would amplify that message far and wide.

This doesn’t mean that rights aren’t talked about. The Tories—who want to scrap the UK’s 1998 Human Rights Act and (some say) withdraw from the European Convention on Human Rights (ECHR) entirely—make the claim that they are true champions of fundamental rights. And even that repealing the Human Rights Act will be a net gain for human rights. But what they have in mind are citizen-first rights, British birthrights, rights that do not extend to those—criminals, refugees—who are not regarded as full members of the sovereign community. In other words, these aren’t human rights at all, they’re national rights. The revolutionary thrust of human rights—to protect those without the right to have rights—is lost. Abandoned, desperate people are seen as the major threat to human rights. The strong support for Brexit among many Labour voters, and the lukewarm support for Remain shown by the embattled Labour leader, Jeremy Corbyn, is a sign that any achievements the EU has made on workers’ rights or disability rights do not counterbalance a loss of control over the levers of the UK economy.

The class upholding these rights was heavily pro Remain and they lost.

Bottom line? Both campaigns fought for change on fundamental questions to do with freedom, justice and equity without referring to human rights. This prefaces a major structural shift. If human rights are to thrive, they can only do so when such fundamental questions have already been resolved—not in the sense that everyone agrees with them, but in the more political sense that a sustainable social coalition holds the balance of power and can embed as well as enforce rights. The class upholding these rights was heavily pro Remain and they lost. Human rights were seen as a cosmopolitan luxury for a metropolitan elite protecting its wealth or a conspiracy to erode national values and destroy national identity by giving strangers and foreigners the same legal protections as citizens. Either way, caught in this vice, the urban professional middle classes failed to prevail. 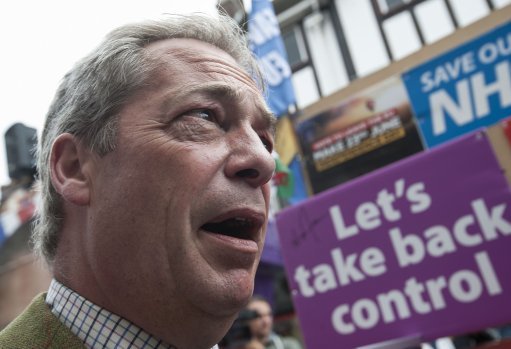 UKIP's leader Nigel Farage campaigns for the 'Brexit' referendum in London. The nationalist and xenophobic rhetoric of the Leave campaign do not bode well for human rights in the UK.

We can see this clearly, and dismayingly, in the instant rise of ugly acts of racism. How thin was the veil of civilization. Never far below the surface, the martial nature of the UK’s archaic war-related nationalism, beloved of Boris Johnson, Michael Gove and Nigel Farage, soon gave way to the flag of St George and spitting at ‘foreigners’. This obscene xenophobia has been legitimated and electrified by its prominent role in the Leave campaign. Not only will it sour social relations within the UK, seemingly a petty-minded island nation with fascist tendencies, it has turbo-charged right-wing European politicians like Marine Le Pen in France and Geert Wilders in the Netherlands who called for their own referendums immediately.

But Brexit’s negative audit doesn’t stop there. The success of UKIP will likely drag the Tories rightward, speeding the Human Rights Act’s demise. Leaving the ECHR will be increasingly attractive—it is one of Tory leadership candidate Teresa May’s signature policies. Then there is the question of Ireland. The ECHR is an important part of the Good Friday Agreement that brought peace to Northern Ireland after decades of conflict. However, the break up of the UK will re-raise questions about Irish re-unification, as Sinn Fein already has, and in the process risk the outbreak of renewed violence along with a catalogue of the worst kinds of human rights abuses.

Then there is the international effect. The UK has been first among equals in terms of its hypocrisy. The UK government has yet to own up to its role in torture and rendition during the war on terror and is supplying weapons to the Saudis as they bomb hospitals in Yemen. Diminishing the UK’s role as a champion of human rights might seem to be a step forward. But what comes after may be worse—a world in which Russia and China set the terms of the international human rights debate and cease even to pay lip service to the idea of human rights. The loss of the UK’s voice in major institutions dealing with human rights, however tainted, cannot be a plus for future human rights compliance.

In the end I don’t disagree with Ben Ward of Human Rights Watch, and I probably retweet, approvingly, more of the tweets posted by Human Rights Watch head Ken Roth than anyone else. The role of international human rights NGOs in pointing out duplicity, brutality and betrayal of principle is essential. But, as the referendum campaign showed, and as the ugly face of right-wing nationalism, newly revivified, confirms, the era of human rights as an effective form of political mobilization on a mass scale is ending (if it ever began). They are underpinned by centrist politics and in the world of Farage, Johnson, Le Pen and, of course, Trump, the centre cannot hold. Time to pick a side.