Donald Trump’s victory is a threat to human rights, but could it also push the movement to transform and strategize with greater urgency?

Donald Trump’s victory creates serious risks and challenges for human rights globally, but this victory could have an unexpected positive effect: to push the human rights movement to carry out transformations in its architecture and changes in its strategy that were imperative even before Trump, and that are now urgent.

Before the decline of the global Anglo-American order, reflected in Brexit, Trump, and the proliferation of illiberal nationalisms across the world, the answers that many analysts and practitioners in the human rights movement offered tended to be grouped in two extremes: skepticism and defensiveness. The skeptics announced the “end times” of the international project of human rights, based on a view that human rights were imposed by Euro-America. Given this view, the end of Pax Americana will also be the end of the movement, as Stephen Hopgood writes. His work is thought provoking and inexact in equal parts, and it forgets that this regime was built in part with the ideas and the pressure of states and movements of the global South, from those who created the American Declaration on the Rights and Duties of Man in 1948 to postcolonial nations that pushed for treaties against racial and religious discrimination in the sixties.

Skeptics also rely on an incomplete reading of the global impact of the movement. For example, even if Samuel Moyn is right in claiming that the impact of international law on the American civil rights struggle is negligible, generalizing to the rest of the world is empirically inaccurate. It runs counter to abundant evidence that the making and implementation of international norms such as those enshrined in the UN Durban Declaration or the Convention against Racial Discrimination have—in combination with domestic political and legal mobilization—made key contributions to advancing the cause of racial justice in countries around the world. More generally, Anglo-American skeptics tend to miss myriad processes of “vernacularization” whereby international human rights have been incorporated into national constitutions, policies, court decisions, and social movement’s frames and repertoires of contention.

But recognizing the history and accomplishments of the movement does not imply that the dominant tactics in human rights, under the Euro-American order, are without serious flaws. Nor does it imply that, with the decline of that global order, the conventional tactics will be any more sufficient or effective than they have been of late.

In a multipolar world, the old standby approach of appealing to Washington so that the US government would pressure its global South counterparts to comply with international human rights standards (while the US itself exempted itself from doing so) was already losing its effectiveness. If Trump fulfills his campaign promises—stoking nationalism and violating the basic rights of vulnerable groups like religious and racial minorities—he will ultimately take away the limited effectiveness and legitimacy that the naming and shaming strategies centered on Washington have left.

Moreover, the new context will put considerable pressure on the fault lines and blind spots of the contemporary architecture of the human rights field: the concentration of agenda-setting power and funds in International NGOs (INGOs); the difficulties of INGOs in collaborating on a level playing field with global South organizations and in adopting the agendas that are of high priority for global South organizations (such as economic justice and social rights); the insufficient connection between professional NGOs and social movements; and the inordinate dominance of law-centered discourses and strategies. That is why the second response—the defense and reinforcement of the status quo of the movement—is equally ill advised to confront the challenges of the Trump era.

Human rights activists and analysis should have mended these fissures in times of relative normality. Now we will have to do it in extraordinary times, with the added difficulty of facing the closing of civil society space everywhere, including in the United States and Europe.

This rebuilding of the movement is a middle road between skepticism and defensiveness. I propose two steps to clearing this path. First, we must broaden the field of vision about the past and the present of human rights, so that we can take into account the very diverse and rich ideas and practices. From direct actions to litigations, from online transnational campaigns to national constitutional reforms, organizations and movements from across the world have domesticated international human rights norms and discourses, while also expanding their boundaries to include the struggles for distributive justice.

Human rights activists and analysis should have mended these fissures in times of relative normality.

For example, in a multi-year research-action project, I studied how indigenous peoples in the Americas have expanded the meaning and the impact of their right to be consulted about projects or laws that affect them. Although initially ILO Convention 169 conceived of consultation in liberal procedural terms, and did not give indigenous peoples the power to veto actions that were harmful to their territories or culture, in practice, indigenous organizations and their allies have successfully promoted a more collective and substantive understanding of that right. Reinterpreted this way, human rights language and actions have been among the most effective tools to question extractive industries and battle against climate change in places as distant and different from each other as the territories of the Sarayaku nation in the Ecuadorean Amazon, or, recently, in Sioux territories in North Dakota in the US. 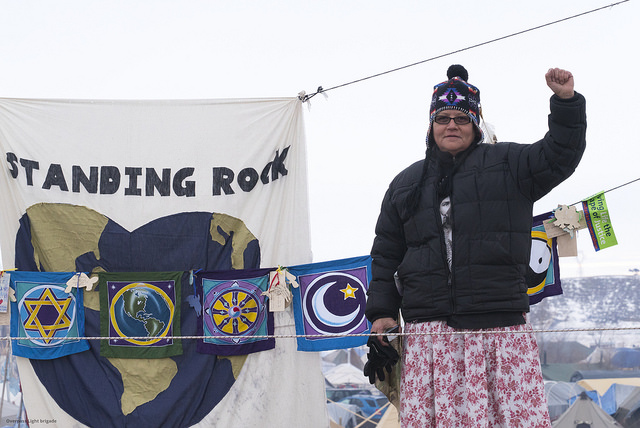 Human rights language and actions have been among the most effective tools to question extractive industries and battle against climate change in places like Standing Rock, located in the Sioux territories of North Dakota, United States.

A similar development can be seen at play in the realm of socio-economic rights. Although initially raising doubts among scholars and advocates in the North, efforts by NGOs, social movements, courts and scholars mostly in the South have successfully incorporated these rights into the legal and political repertoire of the field. And in cases ranging from campaigns to curb patents and promote access to medicines in South Africa to the regulation of food markets in India, human rights actors and tools have contributed to broader social justice movements against market fundamentalism.

Second, from the strategic point of view, it is important to build on promising transnational collaboration initiatives in order to counter the asymmetry of the human rights field, an asymmetry that skeptics critique for good reason. As I previously wrote in this forum, in this context “multiple boomerang” strategies have been particularly successful. These strategies consist of actions coordinated by several organizations in different countries, in order to exert simultaneous pressure on the governments to which each of them has access. In some occasions, this takes the form of alliances between national organizations, as in the campaign that blocked the attacks of Latin American states against the Inter-American Human Rights System. In other occasions, they rely on the transnational work coordinated by a network of national organizations, such as CIVICUS, INCLO or ESCR-Net.

Human rights are not the only tool necessary to defend individual dignity and social justice in the face of the rise of illiberal nationalisms. The proverbial hammer must avoid making us see every problem as a nail. But it would be a mistake to throw it overboard, much less so when the boat requires urgent repairs in the middle of the storm.