Intergenerational commitments in climate change are critical to protect children’s rights now and to build the next generation of environmental defenders.

For many children in developing countries, the reality of climate change is intricately intertwined with children’s human rights to education, healthcare, shelter and sanitation. UNICEF estimated that, as of 2015, half a billion children—a quarter of the global child population—live in areas with high flood frequency and 160 million are susceptible to drought. Children are also more at risk than adults from dying of vector-borne diseases like dengue and malaria and suffering from malnutrition and diarrhoeal and respiratory diseases—all problems worsened by increasing temperatures, air pollution, and water scarcity linked to climate change.

"Climate change experts have cited the problem of “myopia,” or short-term thinking, as a barrier to environmental reform."

Yet, climate change experts have cited the problem of “myopia,” or short-term thinking, as a barrier to environmental reform. As per human instinct, we are more concerned with immediate, tangible gains than distant, longstanding consequences. There is a generational divide between the people in leadership positions with spending and voting power and the people who will be most affected by climate-related policy decisions and government action: our children and grandchildren.

In South–North debates about climate change, many activists focus on the injustice borne by people in developing countries least responsible for carbon dioxide emissions, who disproportionately suffer the impacts in terms of natural disasters and food and water shortages. This inequality is exacerbated for children, who are particularly vulnerable to disease and are bearing the costs of past generations’ actions. But we must think not only of the problems these children face now; we must consider what they will face when they become the next generation of leaders.

The imperative for cooperation between generations

According to a recent report from the leading global authority on climate science (the Intergovernmental Panel on Climate Change or IPCC), many effects of global warming—such as ocean warming and acidification, ice melt in the polar region, and rising sea levels—will persist even if we stopped global emissions today and thus will inevitably affect future generations. The United Nations Framework Convention on Climate Change (UNFCCC) also considers intergenerational equity in Article 3 of its 1992 treaty: “The Parties should protect the climate system for the benefit of present and future generations of humankind, on the basis of equity and in accordance with their common but differentiated responsibilities and respective capabilities.” 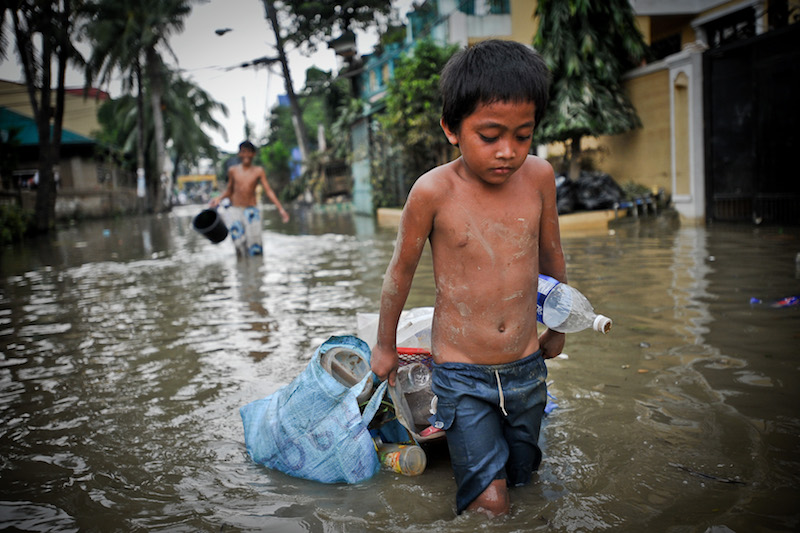 In the aftermath of Typhoon Ketsana (Ondoy), a boy drags some possessions through the flooded streets of Metro Manila.

One first step to ensuring children’s rights through is to bring current leaders and future leaders together in an intergenerational effort that integrates often forgotten perspectives, aspirations and unique knowledge sources into climate action. To protect children’s rights in the present and create future climate change leaders, children can participate in disaster risk reduction preparation and international policy-making through representation at events such as the United Nations Climate Change Conferences. Governments, civil society and the international community can also work to provide social protection to meet children’s basic needs, offer humanitarian assistance, fund grants to support child-led projects, integrate rights-focused education into the curriculum, and train students for environment-oriented career opportunities.

For example, in the Philippines in 2007, in the wake of heavy rains that caused a devastating landslide, children started an environmental education campaign that influenced their school’s decision to relocate. In Sri Lanka, after the Indian Ocean tsunami, Save the Children consulted with 2,500 children as part of the reconstruction process to better understand the problems facing the younger generation. They discovered that one-third of children were still displaced and many were not attending school, which led to more efforts dedicated to resettlement.

But in order to move towards intergenerational equity, conservation efforts need to include all generations: from children, to older people, to working adults. In Inuit households in Northern Canada, older adults have been critical in passing on ancestral knowledge of local endangered flora and fauna. Working adults can also invest more heavily in infrastructure that can withstand and mitigate climate change impacts for the future, such as energy-efficient and disaster-resistant housing, retrofitted office buildings, electricity-powered vehicles and better public transportation networks.

Some countries are already taking some first steps in preventative action to realize intergenerational equity and change the plight of tomorrow. For example, Bangladesh, in a move that is anticipating the impact of climate change on coastal agriculture sector, is expanding educational access to transition the career prospects of youth in other sectors.

Moving past the tragedy of the commons

Climate justice now accurately reflects the tragedy of the commons dilemma. In a system where global natural resources are shared, people will look out for their own self-interest instead of the common good, which disadvantages marginalized groups of people. To protect nature, rights and environmental groups have proposed establishing the International Rights of Nature Tribunal that gives nature itself the “right to exist, persist, maintain, and regenerate its vital cycles,” and makes violations punishable in the court of law. Other parties have suggested putting a price on natural capital through programs such as carbon trading, still a highly controversial strategy.

A Native American proverb says, “We do not inherit the Earth from our ancestors, we borrow it from our children.” We need to move beyond blame about the past and move forward into sharing responsibility for shaping the future. By encouraging dialogue between different generations, we can ensure that each generation is able to contribute their unique assets—whether those are learned experiences and wisdom, creativity and hope-filled energy, political influence or financial resources—to solve the most critical challenges connected to climate change.

Leah Davidson started her work in sustainability when she travelled to Antarctica in 2011 on a scholarship with Students on Ice. She has founded a youth environmental campaign called Act for Antarctica and worked on several projects with UN agencies, most recently as a “Voices of Youth” blogging intern on climate and environment with UNICEF.

Climate change talks must focus on the most vulnerable: the world’s children