If having to explain a joke defeats its purpose, having to correct it is a disgrace, especially if you are a professional comedian like Ecuadorian cartoonist, Bonil. And when those in power don’t have a sense of humor, jokes can be more than just embarrassing—they can be extremely expensive.

On February 9, Xavier Bonilla, otherwise known as Bonil, appeared before the Ecuadorean Information and Communications Superintendence (Supercom) due to a cartoon he published last August in the newspaper El Universo. The drawing mocked Augustín Delgado, congressman in Correa’s political camp and ex-player of the national soccer team, due to an episode of stuttering during a televised speech before the National Assembly.

This is not the first time that Supercom has come after Bonil. A year ago, it finedthe cartoonist and his newspaper US$90,000 and forced him to rectify another sketch, which lampooned the office search of an opposition member (who had accused the government of corruption). According to Supercom, the cartoon was “not strictly true” and “stigmatizes the actions” of those that appear in it. But Supercom’s critique and justification for its actions included the very definition of what makes a cartoon. If the sketch had been strictly true— if it had not distorted, exaggerated, or inverted the facts— a simple photograph would have sufficed. If it did not stigmatize human conduct— if it did not question it with wit and sarcasm—nothing would differentiate it from the news. 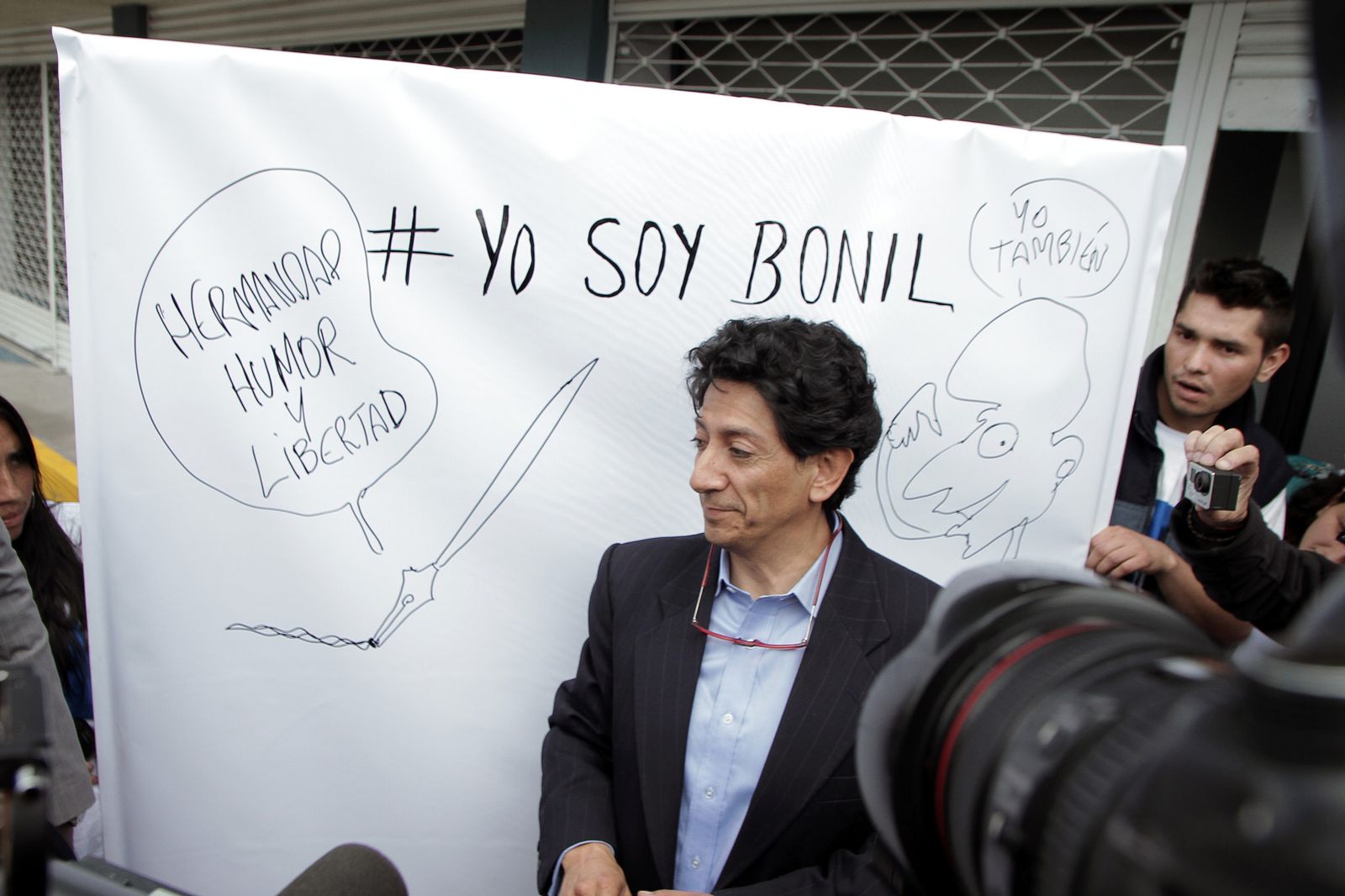 Without these differences, critique and humor die out. Patrick Chappatte would make The New York Times go bankrupt. John Stewart, Stephen Colbert, and John Oliver would spend all their time at court. The legendary late night hosts David Letterman and Jay Leno would have shutdown CBS and NBC, not because of scandals but because of government imposed censure.

These are essential differences for democracy and freedom of expression. This is why independent courts, from the European Court of Human Rights to the Inter-American Court and national supreme courts, differentiate between freedom of information (which is subject to the duty of truthfulness) and freedom of expression (which is not). They likewise grant more leeway to opinions about those holding public office as a counterweight to their power.

Humor can also be an important thermometer for democracy, as Rafael Correa’s administration has demonstrated. Correa’s increasing intolerance for satire has gone hand in hand with the erosion of civil liberties and the rule of law.

Correa’s increasing intolerance for satire has gone hand in hand with the erosion of civil liberties and the rule of law.

The most lucid recounting I’ve heard on Ecuador’s “citizens’ revolution” was from María Paula Romo, a prominent member of Correa’s movement in the 2008 Constituent Assembly. The first stage was the progressive and democratic government that promulgated the 2008 constitution, which guaranteed civil liberties and added an exemplary catalog of economic and environmental rights. It was a proposal set on equality without eroding basic liberties, and there were more than enough reasons to admire the change.

In 2011 came a new stage, when the government shifted dramatically, stifling its critics and changing the entire mood of the citizens’ revolution. The judicial reform of this same year aligned the courts with the executive, as was documented in a report by the Due Process of Law Foundation, Dejusticia, and the Institute for Legal Defense. This reform was the first of many that weakened democratic controls, from the right to protest (limited by criminal laws about terrorism that have been used against social movements) to political rights (restricted by legal and administrative obstacles aimed at opposing political parties and social movements). This was the stage at which many Correa supporters from the democratic left, like Romo, decided to leave the government and carve out a niche in the opposition.

Out of those changes came the law that has put Bonil between a rock and a hard place. The 2013 Organic Law of Communications imposes so many harsh controls on the media and freedom of expression that some have called it the “gag law”. It creates offenses so vague  (like “media lynching” when a media outlet critically covers a public servant repeatedly) and with such invasive requirements (like media outlets’ duty to hire an advisor selected by a state-mandated procedure) that in practice it gives the government free range. According to Fundamedios, during the first year the law was in force, Supercom started 136 processes against media outlets and imposed sanctions in 42 of the cases.

For Romo and other observers, the turning point toward the current phase was the constitutional reform that would allow Correa’s indefinite reelection. This change is currently making its way through the legislature, after being approved by the Constitutional Court.

From Charlie Hebdo to Bonil

The waves of Bonil’s persecution by the government will certainly be felt beyond Ecuador. The initial accusation against the cartoonist alleged racial discrimination because the Congressman Augustín Delgado is Afro-Ecuadorean. Even though Bonil did not make any allusion to the subject’s skin color, the government and some anti-racist organizations have done so in their complaints. The artist publicly reiterated that this had not been his intention and apologized for such an interpretation of his cartoon. In the end, the charge he faced was for “socioeconomic discrimination”. In the end, Supercom ordered Bonil’s newspaper, El Universo, to publish an apology in its website’s header within 72 hours and to keep it there for a week. Criminal prosecution will soon follow.

It should come to no surprise that the Ecuadorean government decided to delay the hearing against Bonil, initially set for the 16th of January, when #JeSuisCharlie became a global sensation. Since the Charlie Hebdo attacks, Bonil has appeared in public holding a giant pencil, while #YoSoyBonil trends in social networks in Ecuador. The Bonil case provides an important reminder that threats against satire and freedom of expression do not only come in the form of violence.

Among all the manifestations of opinion, humor and satire are the freest, and often the most forceful. As Darío Fo, the Italian comedian, playwright, and Nobel laureate, once said: “Satire is the most efficient weapon against power: power does not tolerate humor, even so-called democratic leaders, because laughter frees man from his fears.”