Palestine, the ICC and the emperor’s clothes

Palestinians are all too familiar with how easily international law is ignored – but even so Palestine should join the ICC to show this law still matters.

For many years, the implications if Palestine were recognized as an observer state at the United Nations (UN) led to heated debates around the globe. There were arguments on how this recognition might affect the already moribund and hopeless peace process. It generated much discussion too of the doors it would open for a Palestinian State in terms of its legal rights and obligations as a recognized member of the international community of states. Israel and the United States lashed out and threatened repercussions if such status was granted.

In the end, the Palestinian Authority did seek and was granted recognition from the UN in 2012, as a Permanent Non-Member Observer State, and very little happened. A majority of states now recognize Palestine, but not enough of the ‘important’ ones, and we’re still in the same place we were before.

Will it be similarly irrelevant if Palestine accedes to the Rome Statute of the International Criminal Court (ICC)? No, and it is crucial that Palestinian Authority does join the ICC to show, in the face of all evidence to the contrary, that international law matters.

Palestinian Authority President Abbas was under intense pressure and threats not to accede to human rights treaties or the ICC statute. He took advantage of a political moment and, in April 2014, signed papers acceding to all the major human rights treaties, except the Rome Statute. After the most recent war in Gaza in July and August, the possibility of joining the ICC is back on the table. This is leading to the same acrimonious debates and even more intense pressure on the Palestinians (and on the Office of the ICC Prosecutor as well).

If Palestine joins the ICC it will most certainly be punished by the US and probably also by several European countries – whether or not it actually requests an investigation into Israeli war crimes and crimes against humanity. Israel will respond by further escalating its annexation policies and tightening control of the occupation – as though it needs any excuses – and to foreclose any possibility of a peaceful resolution of the conflict.

Everyone in the room knows that the Emperor is really naked but no one dares to say...what is obvious – that  international law is of no use at all if it continues to be implemented selectively.

The issue of Palestine joining the ICC raises a crucial question, but not about the peace process; that’s a dead horse. Rather, the question is about whether international law is to command any respect if it remains a tool in the hands of the major powers. This question is reminiscent of the story of the Emperor’s new clothes: everyone in the room knows that the Emperor is really naked but no one dares to say it. Or, in this case, states don’t dare say what is obvious – that  international law is of no use at all if it continues to be implemented selectively in an international system structurally biased in favor of the great powers.

Of course this is not news. Activists and analysts have been pointing to this problem for years.  As their frustration with injustice rises, many blame the system that has been painstakingly put in place, writing about the failure of human rights and international law. But it is the actions of states that will determine whether or not the Emperor’s nakedness is exposed. Until now, the behavior of powerful states has been to continue insisting on legal processes, on the importance of fighting impunity, on the responsibility to protect civilians, women’s rights, and a myriad of other issues, but few have matched their actions to those intentions.

Palestinians are all too familiar with international law being ignored: a litany of Security Council resolutions vetoed or unheeded; the advisory opinion of the International Court of Justice on the Wall; Human Rights Council fact-finding missions and their reports, that should have instigated war crimes investigations and tribunals; and numerous reports of human rights treaty bodies and UN special rapporteurs and independent human rights experts that have been on the record for decades. The response has been deafening silence.

International human rights and humanitarian law must be made to work. There’s no choice in the matter, because in their absence regress to the law of the jungle is inevitable. This is exactly what we’re seeing in so many countries, especially in the Middle East. The chaos in Iraq, Syria, and elsewhere is a direct outcome of the near complete disregard for international law and human rights, and all states are responsible, particularly those with the power to influence decisions in the international arena. The international community must be pushed to make the law work.

Civil society groups have taken it upon themselves to try and do so. Palestinian human rights organizations like al-Haq and the Gaza-based Palestinian Center for Human Rights, together with international lawyers in solidarity with them, have tried to pursue war crimes prosecutions under universal jurisdiction in several countries around the world. The global Boycott, Divestment and Sanctions movement, like the anti-Apartheid movement, takes the implementation of international law as the basis of its efforts to protect Palestinians under occupation, and to bring pressure to bear on Israel and the international community. 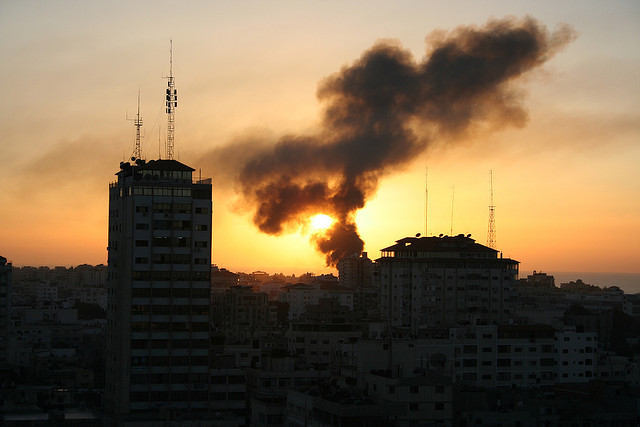 The sun sets on another day in Gaza while the skyline burned. It is crucial that Palestinian Authority does join the ICC to show, in the face of all evidence to the contrary, that international law matters.

Meanwhile, states continue to bury their heads in the sand and to laud the naked Emperor. The Government of Palestine may be doing so as well, as it has dealt with the question of ICC accession as little more than a ploy and pressure card to gain political points in vacuous negotiations.  There have even been some Palestinian officials singing the same Israeli tune. Namely, that joining the ICC is a “danger” to Palestine because of the possible prosecution of Hamas members, even though Hamas has agreed to the move. During and after the recent Israeli war on Gaza, popular demand grew in Palestine for joining the ICC. President Abbas owes it to his people to do so, especially to the thousands of victims in Gaza, regardless of the political costs to some Palestinians.

If Palestine joins the ICC, it can be the one courageous voice that shouts out that the Emperor must cover himself. It will face tremendous political pressure not to do so, even more not to force an investigation, and much, much more pressure if such an investigation points to prosecution.  Yet a higher morality demands it, as does a vision for a future where an international legal regime can level the field for strong and weak alike, and where powerful states are made to implement what they purport to uphold. Otherwise, the Emperor will keep strutting on, happy in his naked regalia.

Fateh Azzam is the Director of the Asfari Institute for Civil Society and Citizenship and Senior Policy Fellow at the Issam Fares Institute for Public Policy and International Relations, both at the American University in Beirut. He previously served as the Middle East Regional Representative of the UN High Commissioner for Human Rights, Director of Forced Migration and Refugee Studies at the American University in Cairo, Human Rights Program Officer at the Ford Foundation in Lagos and Cairo, and Director of the Palestinian organization Al-Haq. He led the process of establishing the Arab Human Rights Fund (www.ahrfund.org). Azzam holds an LLM in International Human Rights Law from the University of Essex.