While the ICC has encountered serious challenges in Kenya, the Court has an important role to play in strengthening Kenyan rule of law and holding elites to account.

On the 8th of October 2014, Kenyan President Uhuru Kenyatta made history when he became the first sitting head of state to appear before the International Criminal Court (ICC) in The Hague. Kenyatta stands accused of committing crimes against humanity, following the disputed 2007 presidential elections.

But what should have been a key milestone in the Court’s history was overshadowed by the fact that Kenyatta’s trial had been put off several times. He was appearing at a “status conference”, convened to map the way forward. This followed the prosecutor’s admission that she did not have sufficient evidence to proceed to trial after the death or withdrawal of several key witnesses, in addition to the failure of the Kenyan government to hand over crucial evidence. In fact, it had become highly doubtful that the trial would ever even start. Yet, Kenyatta’s appearance at the ICC presents an important opportunity to assess the impact of the Court on Kenya.

President Kenyatta and his Deputy William Ruto were among six high profile Kenyans indicted by the ICC following the widespread violence that broke out after the disputed 2007 presidential elections. The charges against two other indictees, Henry Kosgey and Hussein Ali, were rejected by the Pre-Trial Chamber. The Prosecutor, Fatou Bensouda, also dropped charges against former civil service head, Francis Muthaura, citing the death or withdrawal of key witnesses. The trial of William Ruto and his co-accused, radio journalist Joshua Sang is ongoing.

The ICC opened an investigation in Kenya in March 2010 after Prosecutor Luis Moreno-Ocampo obtained permission from the judges to intervene. This followed Kenya’s failure to establish a domestic tribunal to prosecute perpetrators of the widespread communal violence that occurred after the 2007 elections. The election—which pitted the incumbent President Mwai Kibaki against his main challenger, Raila Odinga—was the most closely contested in Kenya’s history. The campaigns had also been conducted in a highly polarizing atmosphere, with Odinga’s Orange Democratic Movement capitalizing on Kenya’s history of inequality and ethnic exclusion to build a formidable coalition against Kibaki’s Party of National Unity.

When the Election Commission declared Kibaki to have won the election, despite a seemingly unassailable early lead by Odinga, the opposition cried foul and rejected the results. Widespread violence ensued, leaving 1,133 people dead, over 600,000 displaced, and hundreds of women and men sexually assaulted, and much property destroyed. For a few weeks in early 2008, Kenya stood on the verge of a full-scale civil war and was only pulled back from the brink by the intervention of the international community, specifically through mediation efforts by a Panel of Eminent African Personalities chaired by Kofi Annan.

Among the outcomes of the mediation agreement was a commission of inquiry into the post-election violence, which recommended the establishment of a special mixed tribunal sitting in Kenya to prosecute perpetrators of the violence. It was only when Kenya failed to establish this domestic tribunal that the ICC opened an investigation.

Initially, there was widespread support for the ICC from both the public and the political elite. Members of parliament rallied under the slogan, “Don’t be vague, go to The Hague” to successfully campaign against the establishment of the special tribunal and invite the intervention of the ICC. However, despite significant public support for the ICC, as soon as the Prosecutor unveiled the names of the six high profile Kenyans he sought to prosecute, there was an immediate backlash. Parliament passed a motion to withdraw from the Rome Statute and the government embarked on a high profile—but ultimately unsuccessful—international campaign to seek a deferral of the Kenyan cases. 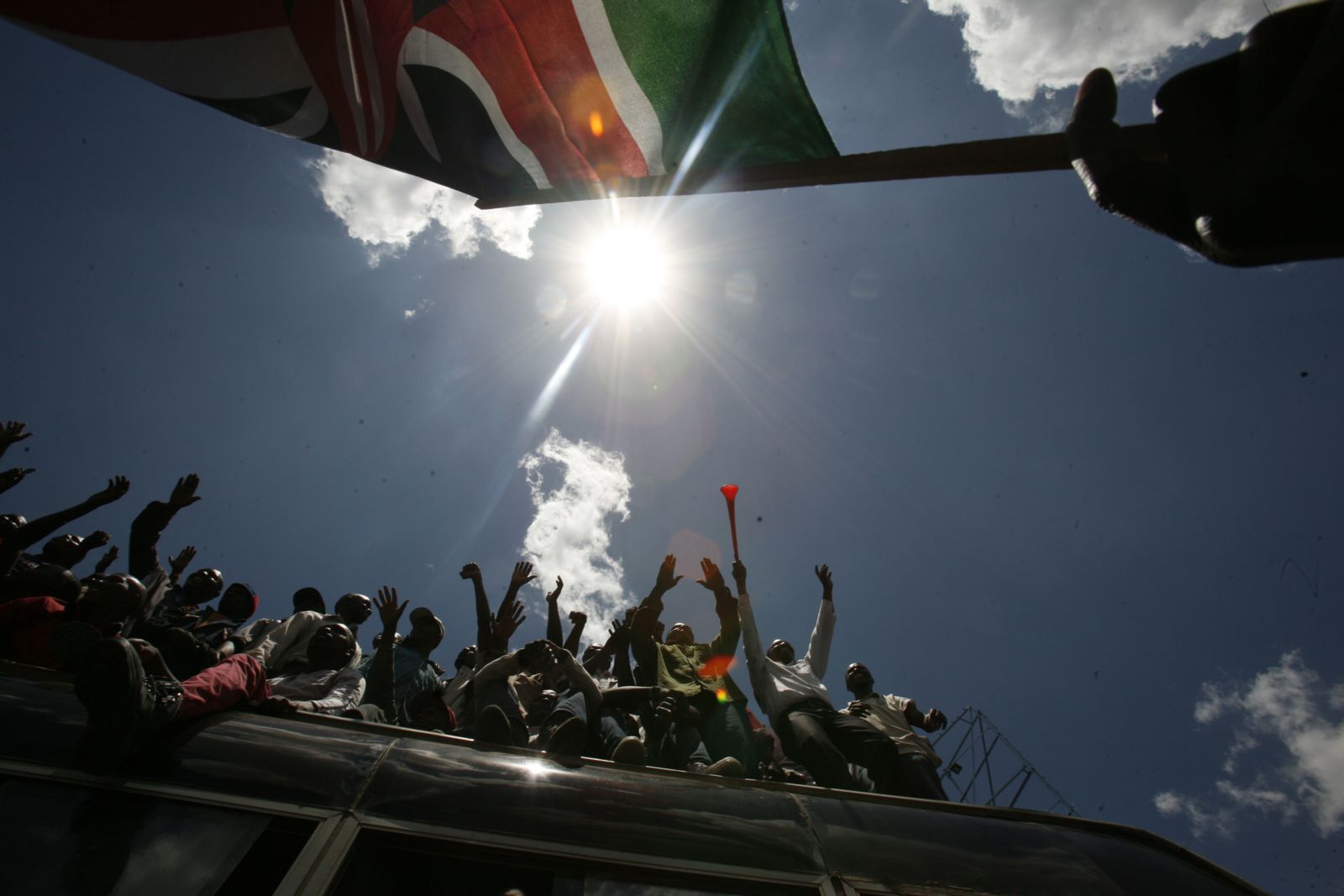 Supporters greet Uhuru Kenyatta's return from The Hague with, "a rapturous and well-choreographed welcome."

Politically, when it became clear back in 2010 exactly whom the Court was targeting for prosecution, the political elite quickly closed ranks. The 2013 election should have been used as an opportunity to consolidate the gains promised by the new constitution adopted in 2010. Instead, Uhuru Kenyatta and William Ruto—who had been on opposite sides of the 2007 election campaigns—formed an alliance, proclaimed the election to be a referendum on the ICC and went on to run on a joint ticket for President. Their narrow win against Raila Odinga was upheld by the Supreme Court, but it left Kenyans more polarized than ever.

In the eighteen months since Kenyatta and Ruto came to power, their supporters have viciously attacked civil society organizations that support the ICC process, nick-naming them “the evil society” and depicting them as agents of foreign powers. The ruling coalition has vowed to push through legislation to curtail the activities of civil society organizations by limiting the amount of funding that they are allowed to receive from foreign donors. With these worrying developments, there are genuine fears that the democratic space that Kenyans fought hard and long for is being threatened by the Kenyatta government.

Another negative consequence of the ICC intervention is that it has shifted attention from victims to alleged perpetrators through the sophisticated way in which the accused have used the media to their advantage. With the ICC sucking up all the air from the room, other justice processes such as the Truth, Justice and Reconciliation Commission have fallen by the wayside, as there is no way to discuss victims’ concerns without being accused of supporting the ICC.

Before the ICC’s intervention, no high profile politician had ever been held accountable for political crimes...including assassinations, massacres, torture, grand corruption.

On the positive side, the ICC cases represent a key milestone in strengthening the rule of law. One of the root causes of post-election violence was an entrenched culture of impunity in Kenya. Before the ICC’s intervention, no high profile politician had ever been held accountable for political crimes committed since independence, including assassinations, massacres, torture, grand corruption and electoral violence in 1992 and 1997. For the first time in their history, Kenyans have witnessed powerful individuals being prosecuted for alleged crimes. They have also seen modest institutional reforms in the judiciary, the security sector and the witness protection agency, which were partly meant to convince the international community that Kenya was ready to prosecute post-election violence crimes.

As Uhuru Kenyatta returned from The Hague to Kenya to a rapturous and well-choreographed welcome, the case against him seemed to hang by a thread, thanks to alleged witness intimidation and the failure of the Kenyan Government to cooperate with the ICC. Further, with little effort to bring perpetrators to justice at home, victims are likely to feel lost and forgotten. This is why the ICC must ensure that—despite the challenges—the Kenyan cases are pursued to their logical and lawful conclusion.

Njonjo Mue is an expert in human rights and transitional justice. He is based in Nairobi and works as a Program Advisor to Kenyans for Peace with Truth and Justice.