It is often maintained, directly or by implication, that Hinduism is antagonistic to human rights, that the only relationship possible between them is one of diametrical opposition, that the hierarchy of the caste system on which Hinduism is based leaves no room for the equality on which human rights are based.

Such a view appears to be so partial as to be erroneous. It may contain some truth in individual instances, but should not obscure the larger reality of Hinduism being entirely hospitable to human rights. Like Larry Cox writes in his piece, it is tragic to assume human rights and faith to always be in conflict, especially when moral values of dignity are the basis of much religious tradition.

The Hindu tradition, particularly, contains various accounts of the origin of the caste system. The best known among these is in the Purushasukta of the Rigveda, which explains that the universe was created out of a single cosmic man (Purusha) when his body was offered at the primordial sacrifice. The four varnas or classes came from his mouth (priest), arms (warrior), thighs (peasant) and feet (servant).

Then it reflected. The Kshatriya is to protect them all but the Kshatriya tends to be intrusive. So in order to protect them all, it created Dharma, religion, or precepts and ethics which make the universe thrive. It is on account of Dharma that the weak overcomes the strong. If this is not the concept of individual human rights as a protection against the power of the state, what is? In the West, this right is given legal and moral basis, but in this passage it is identified with truth, and provided with an ontological and therefore even more firm basis, by being rooted in an is-ness rather than an ought-ness.

A second example which demonstrates the congeniality of Hinduism to human rights is provided by the Taittiriya Upanishad, in which Sankara comments on what constitutes the uniqueness of human beings in comparison with other forms of life. Sankara maintains that a human being differs from say, animals, in that he possesses the capacity for knowledge (Jnana) and action (Kriya). In brief, the uniqueness of a human being consists in his or her being a moral agent.

This moral agency involves entitlement to basic rights and obligations. It then becomes obligatory on the part of society and state to maintain conditions of life in which the human being can exercise his or her moral agency by being able to claim rights and discharge obligations.

The third positive resource for human rights within Hinduism is a reference to the conception of the three debts and its extension in the Mahabharata. The Hindu law books refer to the debts one owes to the Gods, the sages and ancestors and these are respectively discharged through worship, scriptural study and the memorial service called Shraddha. To these the Mahabharata adds a fourth: The debt we owe to all human beings, which then is a debt which all human beings owe to one another, a concept which lies at the core of human rights, for these rights constitute entitlements of each human being on every human being. 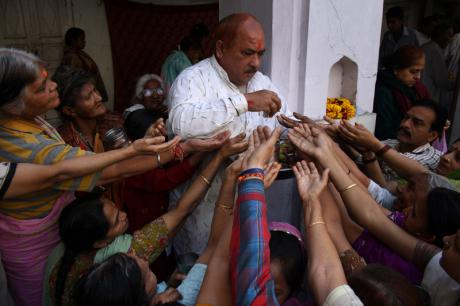 Indian Hindu devotees take holy offerings as they visit to pay obeisance in a temple Sanjeev Syal/Demotix. All Rights Reserved.

The fourth source lies in the concept of duties, which is so characteristic of Hindu axiology. A little reflection will reveal that one party's duty often coincides with another party's right. Thus a human being has a right to safety of person, which in turn is the duty of the state to ensure.

It is this convertibility of duties - rights idiom which perhaps explains the easy and swift shift of discourse from duties to rights in the West, for instance in the US civil rights movement, as Cox points out. A similar easy and swift switch is noticeable in India. By the beginning of the 19th century, social and religious reformer Raja Ram Mohan Roy spoke effortlessly of the rights of Indian women.

A fifth source is provided by Hindu myths, like the story of King Shibi. As he sat in the court one day, a sparrow sought refuge in his lap, while being chased by a falcon. The falcon demanded the sparrow from the king as it constituted his means of subsistence. Accepting the falcon’s right, the king offered his own flesh in order to fulfill his duty of protecting his subjects.

What are now called human rights can be identified in the range of Hindu scriptures from the philosophical to the popular. The cause of promoting human rights is better served by identifying these elements within Hinduism, rather than its wholesale and undiscerning condemnation. This is not to deny that Hinduism may contain elements opposed to human rights, but to challenge the notion that Hinduism is wholly incompatible with human rights.

A version of this article was published in India Abroad.

On a wing and a prayer: can religion revive the rights movement?