There are many points on which to find agreement with James Hathaway’s recent piece in this debate—particularly the continued relevance of the 1951 Refugee Convention. Yet the article’s conclusions and recommendations contrast starkly with an earlier proposal made in 1997 where he argued that the international Refugee Convention regime was no longer workable and should be replaced. Today, all of the justifications for that proposal remain in place but have become measurably worse: non-entrée barriers by northern/western states; interdiction of refugees traveling by sea; restrictive asylum processes; jurisdictional bars to asylum procedures; detention and other deterrence measures to refugees’ access to admission; and visa and other restrictions that confine refugees to particular states or regions.

The policies that host states are implementing that affect refugees’ freedom of movement must be understood in terms of their absorption capacity. Lebanon and Jordan (along with Syria) have already hosted the majority of the world’s Palestinian refugees for over sixty years. Despite incredible efforts to provide for the Syrian refugee influx, Jordan, Lebanon, and even, most recently, Turkey, have exceeded capacity to absorb more desperate refugees. All three countries have effectively closed their borders to more refugees from Syria.

With the Middle East region today hosting 22% of the global refugee total of almost 20 million people, the region has been at the bursting point for years, and now it has burst. Two main factors have caused host states in the region to impose greater restrictions on refugees’ rights, including freedom of movement: the perception that Western/Northern states have caused or exacerbated conflicts in the region, and that the states most vociferously claiming host states are violating refugee rights are themselves major violators of the Refugee Convention. 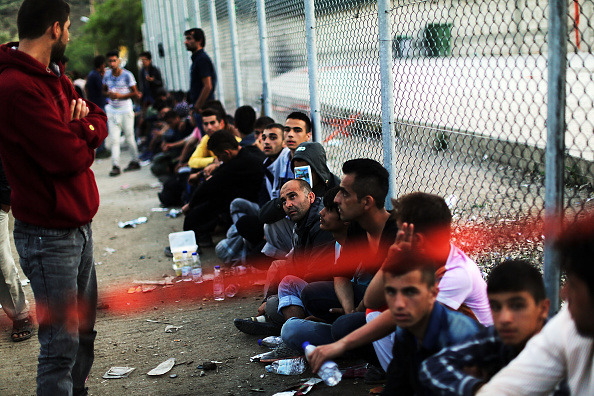 Syrian, Iraqi, and Afghan refugees fleeing to the EU are stalled in Greece.

A key illustration of each factor must suffice here. First, both civil societies and governments across the region widely perceive the creation of the state of Israel as a Jewish-preferred polity—at the expense of millions of Palestinians who were denationalized and expelled from their homeland—as the root cause of the major refugee burden on the region for almost seven decades. Because of their support of Palestinian refugees’ demand of their right to return to their homes, the main Palestinian refugee host states in the region have refused to become parties to the Refugee Convention. This affects all other refugees in their territories, driving their policies towards Syrian, Iraqi and other more recent refugees.

Across the region, governments complain that much-needed assistance from Western states is contingent on their ability to “contain” the refugee crises in their territories.

On the second factor, the barriers to access in Europe and the US in particular that prevent their acceptance of a fair “share” of the world’s refugees, have been highlighted in the Syrian crisis. Across the region, governments complain that much-needed assistance from Western states is contingent on their ability to “contain” the Syrian (and Iraqi and other refugee) crises in their territories. For example, highly restrictive criteria and bars to eligibility that confine resettlement of Syrians to Europe, the US and Canada to a tiny percentage of the refugee flow, reflects poorly on the powerful states that champion Refugee Convention obligations elsewhere. Meanwhile, Turkey, which had kept open borders to Syrians and spent 5.37 billion Euros of its own money by September of 2015 on Syrian refugees—exceeding the entire donation of the EU by then—closed its borders to new Syrian entrants due to EU pressure to stop the onward flow of refugees to European shores.

Huge resources are being squandered to support the “containment paradigm” operating as an insurance policy by Western/Northern states to prevent equitable responsibility-sharing of today’s refugee crisis. This brings us back to the positive proposals put forward in the “core principles” at the end of Hathaway’s article, which can be re-visited in light of the observations above. Principle one is utterly sound, resting on the responsibility-sharing obligation, which is the essence of the Refugee Convention regime. Syria is the source of the largest refugee crisis since World War II, but the global community of states has found frameworks to resolve other major refugee problems during those years. Existing domestic, regional and international laws provide a framework for responsibility-sharing that could be triggered to manage the current refugee flow and prevent further disaster as Syria continues to bleed.

From the 1970 Indochinese crisis on, international agencies and states have come together to craft Comprehensive Plans of Action (CPAs) to share responsibility for refugees and forced migrants fleeing major crises. They built on existing short and long-term admissions programs in the host and third states, created shared incentives among states with varying relationships to the conflict to participate (states of origin, host and potential resettlement states), and instituted planned and regulated departures from the crisis region. However, interim and supplemental types of status should never be considered a replacement for the obligation to offer asylum and related humanitarian admission on a permanent basis.

Principle two is more problematic, as it echoes the discredited “insurance” model of Hathaway’s earlier proposal. Advance planning that allocates significant funding to stem the tide of a refugee crisis is simply more of the current containment paradigm. What principle two avoids is the necessity of building on existing obligations to allow admission of the refugees themselves into the territories of states outside the region. The focus should be on expanding resettlement and building on pre-existing legal obligations, such as Canada’s private sponsorship program, to allow more refugees to leave the area of conflict.

As of this moment, only about 4% of Syrians have made their way into Europe, and only about 150,000 so far have sought asylum—although the rapidly growing numbers show many more will do so in the coming year. As for the US, it has admitted fewer than 1,500 Syrian refugees through resettlement, while the Obama Administration has called for resettling 10,000 in the next year. Contrast that with the almost three million in the hands of frontline states. All states outside the Middle East region need to consider a CPA comprising individual and joint legal obligations under the treaties and regulations already in place.

Principles three and four reinforce the need and mechanisms to require states to accept their responsibility for admitting human beings to their territories rather than throw more money into keeping them out. Principle five also addresses the necessity of triggering all available mechanisms, both short and long-term, to admit refugees and the forcibly displaced in a wide range of short and long-term types of status. Most states have accepted the legal obligation for this broad array of mechanisms that comply with the core Refugee Convention imperative of non-refoulement through time. All this being said, I cannot agree more with Hathaway’s conclusion: it is definitely time to “operationalize” the Refugee Convention, and not to renegotiate it.