Protecting the rights of refugees and migrants requires a response based in hospitality not hostility.

James Hathaway is right when he concludes: “If we are serious about avoiding continuing humanitarian tragedy—not just in Europe, but throughout the world—then the present atomized and haphazard approach to refugee protection must end.  The moment has come not to renegotiate the Refugee Convention, but rather at long last to operationalize that treaty in a way that works dependably, and fairly.” But I also believe we must walk with both legs at once: renegotiate a treaty for the 21st century while effectively operationalizing the old. We need simultaneously to despair at the continual reproduction of human “rightlessness” of refugees and migrants, and to be moved by the messages of hope emanating from global social action that challenges the somnambulism of sovereign power.

This dual strategy implies that until a new treaty is available, we do at least the following: expand international human rights law norms for refugees and migrants when these are inadequate; and work to ensure existing laws work to the benefit of refugees and migrants. When this fails, we must critically expose the myths of border control and the folklore that speaks of a peril of the non-European migrant, as if they were the new “untouchables” of Europe. In the process, we must question our ways of thinking about and doing human rights.

We must hope for an incremental transformation of collective moral sentiment towards the recognition of the dignity and rights of migrant and refugees. Securing these rights is a hard and long labour, akin to the labours of translating the idea of an international criminal court into reality: on my count it took well over 150 years to make it actually happen. Though not widely ratified yet, there is an international Migrants Workers Convention—the invention of the human rights of migrants is after all possible. 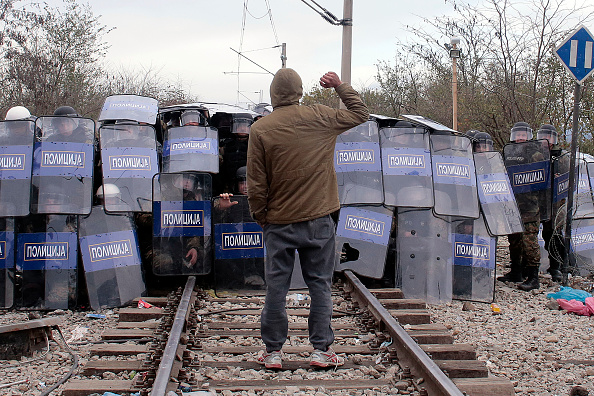 A migrant protests before Macedonian police following tightened controls at the Greece-Macedonia border.

There are new sites of social and popular opposition to repressive policy measures directed against undocumented aliens. These include civil disobedience techniques, such as laying peaceful siege to immigration office buildings and detention centres, the immigrant workers’ strike and related protests. These have yielded some significant dividends. There is now emerging the figure of the migrant as a new proletariat that calls for global solidarity of the working classes, and for public intellectuals critiquing new forms of racism and imperialism.

However, the “criminalization” of undocumented aliens, their exploitation as mere factors of production, and the penalizing withdrawals or denial of minimal healthcare, housing, education and related minimal social welfare facilities, persists and widens.

Our notions of sovereignty shipwreck our images and ideas about what it may mean to say “human” and “having rights.”

Our notions of sovereignty shipwreck our images and ideas about what it may mean to say “human” and “having rights.” In this sense, the tragedy of the Titanic must constantly befall the destiny of the ship “Human Rights”. Its heavily normative cargo thus remains ill-fated, open to inspection lest it may carry contraband moral goods. Crossing sovereign frontiers was formerly a commonplace, including in the era of colonization; now it only produces a new human species described as an “irregular” or “illegal” migrant.

How may we interrupt this carnival of sovereignty perpetrated by state border control officials? As recently as 2008, while acknowledging that nearly eight million illegal migrants work in the European community, the European Pact on Immigration and Asylum states:

“The European Union, however, does not have the resources to decently receive all the migrants hoping to find a better life here. Poorly managed immigration may disrupt the social cohesion of the countries of destination. The organisation of immigration must consequently take account of Europe’s reception capacity in terms of its labour market, housing, and health, education and social services, and protect migrants against possible exploitation by criminal networks.”

Is the EU’s incapacity to “decently receive” irregular migrants a more nuanced formulation of the justification of closed borders? The figure of a necessitous migrant constantly puts into question this axiomatic notion of sovereignty. The ethical labours of the invention of human rights entails questioning the very idea of sovereignty as a power to exclude necessitous migrants—because that limits human rights to the rights of citizenship.

If refugees and migrants everywhere are confronted with “rightlessness”, how may we attend to what Jacques Rancière names as ‘‘the rights of those who have not the rights that they have and have the rights that they have not”? Are the rights they have merely the right to cheat their way into survival and a better future in another country; a right to work in slave-like conditions, or to be exploited in “host” labour markets? Or the “right” to surrender their human right to dignity at the point of arrival—always accompanied by the fear of detention and deportation, and often death?

Continually de-/re-constructed by Jacques Derrida, “hospitality” is a mark of respect for the stranger in our midst. Immanuel Kant memorably insisted, as early as 1795 in his Perpetual Peace:

“… it is not a question of philanthropy but of right, so that hospitality … means the right of a stranger not to be treated as an enemy when he arrives in the land of another. The other can turn him away, if this can be done without destroying him, but so long as he behaves peaceably where he is, he cannot be treated with hostility. What he can claim is not a right to be a guest (for this a special beneficent pact would be required…) but the right to visit; this right, to present oneself for society, belongs to all human beings by virtue of a right to possession in common of the earth’s surface on which, as a sphere, they cannot disperse infinitely but finally put up with being near one another; but originally, no one had more right than another to a particular part of the earth to be in a place on the earth.” (Emphasis added.)

Kant’s distinction between hospitality and hostility is a distinction upon which a new treaty on refugees and asylum seekers ought to be built. Respect for the physical and psychic integrity of the migrant self ought to be a new basic norm even in a heavily bordered world, now aggravated by cross-border terror. We must insist on a “right to engage in public reason”, to re-discover the human rights of the sans-papiers human, and in doing so welcome the enrichment of the languages, logics, and para-logics of “dignity” as “hospitality”.