One of the country’s most informed human rights experts explains how India blocks foreign funding for rights work it doesn’t like. Philanthropists avoid supporting work that will anger the state so the only organizations able to tackle the most sensitive rights issues are those funded by small contributions from ordinary citizens.

It’s a fact little discussed outside India that the Indian government’s approach to foreign funding for human rights work is probably as draconian, or more, as that of Russia or apartheid South Africa. The state uses an antiquated law on foreign funding for non-government organizations like a surgeon’s scalpel, carefully and incisively stifling dissent and regulating non-state activity with any significant level of funding. European governments, all true defenders of the human rights faith when it comes to Mugabe’s Zimbabwe, fail to challenge the Indian state on this because India is too important a trade partner.

Under the so-called Foreign Contribution (Regulation) Act (FCRA) law, all organizations seeking to receive foreign funding must first apply for the permission from the Union Home Ministry. The law was conceived and enacted during the 1975/76 Indian Emergency to stifle civil society activity, particularly focusing on resistance to authoritarian rule by Gandhian voluntary groups.The Indian state has used the law ever since to control what civil society does.

If you apply to be allowed to receive foreign funding, the FCRA office sends intelligence officials to visit your office and check what you are doing in minute detail. It can take up to two years for the application to be approved or rejected, during which time you are regularly visited by intelligence officials. Funding for activities that are potentially embarrassing to the government is simply blocked without any explanation.

The result, over the years, has been a kind of self-censorship by Indian rights organizations. For example, if you are a women's rights organization doing great work on dowry deaths or on education for girls, you learn not to work on specific cases of rape by the armed forces in internal conflict situations. That is a no go area. The same applies to children’s rights and tribal rights organisations if they try to work on issues that implicate the government.My own organization, SAHRDC, has in the past attempted to enlist the help of three major foreign donor-supported organisations to send women representatives to investigate the rape of women in the Kashmir village of KunnanPoshpora. All three politely declined our invitation.

The average citizen sees non-governmental organizations (NGOs) as well-funded, either by international agencies or by Indian Government departments. And recipients of international funding are perceived as being there to further the interests of foreign powers. The Indian media perpetuates this idea and the Indian state machinery, irrespective of the party in power, encourages this perception.

When the state becomes alarmed about non-state initiatives that expose its failings, these initiatives are usually demonized as foreign-backed operations with sinister motives. Recent large scale protests over a nuclear power plant planned in Koodunkulam, in the state of Tamil Nadu, are a case in point. The government explained the stoic resistance of local villagers and thousands of fishermen as being paid for with bags of money by foreign forces who want to hold India back from developing economically and becoming a global power.

Fortunately, non-state activity in India is varied. Many in the non-state sector try to differentiate themselves from state or foreign-funded organizations by calling themselves voluntary organizations or community organizations. Indeed, the major civil liberties and human rights organizations in India do not accept foreign or Indian government funding to preserve their independence, as was the policy of Amnesty International at the global level in the 60s, 70s and 80s.

Many of these organizations, like the People's Union for Civil Liberties (PUCL), the People's Union for Democratic Rights (PUDR), the Andhra Pradesh Civil Liberties Committee (APCLC), to name just a few,  have addressed civil liberties issues across the country, often at great risk to their activists and members. They work on shoestring budgets, raised solely through membership fees and small donations. Organizations funded this way have been able to shine a light on a range of human rights and democratic rights issues over the decades.

Where are the Indian philanthropists?

To be sure, they could do much more with additional funding. Business leaders could be injecting money into these organizations, but those so inclined are loath to fund activities that challenge the state.Some would-be Indian tycoon philanthropists may want to support human rights work on torture, extrajudicial executions or fair trials, but they know their business would suffer as a consequence. They might start receiving repeated income tax inquiries, government contracts could suddenly dry up, bank loans might be refused, and requests for appointments with government officials would get no response.

So although their funds are modest, community rights groups havethe freedom their foreign-funded counterparts do not have to ask hard questions. One organization, the People’s Union for Democratic Rights, even has a policy that it does not accept any donation above Rs.3000 from any single source as a way of ensuring its independence.

The Indian state is aware that regular contact with its intelligence officials not only brings you in conformity with the machinery of the state but also helps the intelligence services to recruit agents and informers. Activists suspect that some human rights groups have been infiltrated by the security services. This is true of only a miniscule number of NGOs, yet indicative of what sister organizations have had to do in order to secure foreign or government funding or patronage.

Meanwhile, those organizations that try to push the boundaries using foreign funding, such as the Indian Social Action Forum (INSAF) with its recent protests against the Kudunkulam Nuclear Power project, simply find that their FCRA permit has been suspended. INSAF’s bank accounts were frozen, it has been subjected to a lengthy inquiry, and the organization has been effectively crippled. People’s Watch Tamil Nadu, which also participated in these protests, has also been barred from receiving foreign funding. 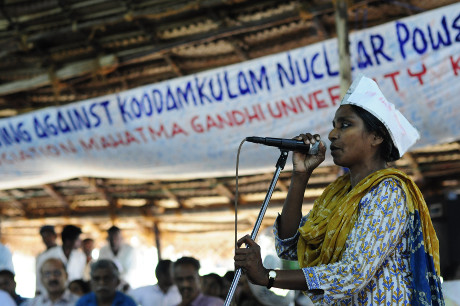 INSAF is challenging the state’s decision in the courts, arguing that the FCRA law goes against the fundamental rights chapter of the Indian constitution.

The governments of donor countries must use more spirited public diplomacy to support brave organizations as they challenge India’s restrictive policies on international funding.

Until foreign pressure brings about a change in the FCRA, Indian civil society is currently stuck between heavily controlled NGOs with significant foreign funding and independent home-grown initiatives with limited local funding. The community-funded organizations must broaden their local donor support base to grow. This is unlikely, however, to be as lucrative as funding that comes from foreign donors.

Ravi Nair is the Executive Director of the South Asia Human Rights Documentation Centre (SAHRDC). He is the recipient of the M A Thomas, National Human Rights Award for 1997. SAHRDC has never accepted Indian Government funding and has not accepted any international consultancies since 2006.