Repressive governments can damage the effectiveness of human rights action by attempting to discredit a prisoner of conscience.

“There can be a fine line between defending the rights of terror suspects and defending their views. Amnesty International has been thrust into a very public struggle about where exactly that line is.” – Guz Raz, NPR Host of “All Things Considered” February 27, 2010

For decades, Amnesty International and other human rights organizations (HROs) have been working for the release of “prisoners of conscience” throughout the world. These individuals are often serving long prison sentences in excruciating conditions; they have been jailed for nothing more than their beliefs and non-violent advocacy efforts. Once a prisoner of conscience is identified, Amnesty International and other HROs begin a media campaign designed to increase pressure on a regime to release the prisoner. Through press releases, emails, and social media, HROs try to get individuals around the world to understand the plight of the prisoner and join efforts to get the prisoner released.

HRO campaigns, however, do not operate in a political vacuum. Once campaigns gain momentum, repressive governments often attempt to invalidate their claims. In the context of campaigns in support of prisoners of conscience, government responses often attempt to discredit the prisoner by accusing them of engaging in violence. Sometimes, like in the well-known case of Nelson Mandela, political prisoners have acknowledged their past use of violence. Other times, however, prisoners of conscience have been accused of violence without clear evidence that they have engaged in it. Such attempts at discrediting increasingly include labeling the abused individual a terrorist.

To a considerable extent, the success of HROs depends on their ability to mobilize individuals. As potential supporters of an HRO campaign are deciding whether to lend support, they often receive information from both the HRO and the repressive government. Repressive governments try to discredit prisoners of conscience because they believe that tactic to work. Does it actually work? Does a terrorist label issued by a repressive government reduce support for a prisoner of conscience?

To answer this question, we conducted an online survey experiment. We collected data from 406 participants, who were contacted through the Qualtrics platform. Our sample approximates a US nationally representative sample.  The experiment presented participants with a vignette describing the case of Nabeel Rajab, a Bahraini human rights activist who currently faces fifteen years in prison on account of offensive tweets, and who has previously been accused of being a terrorist. 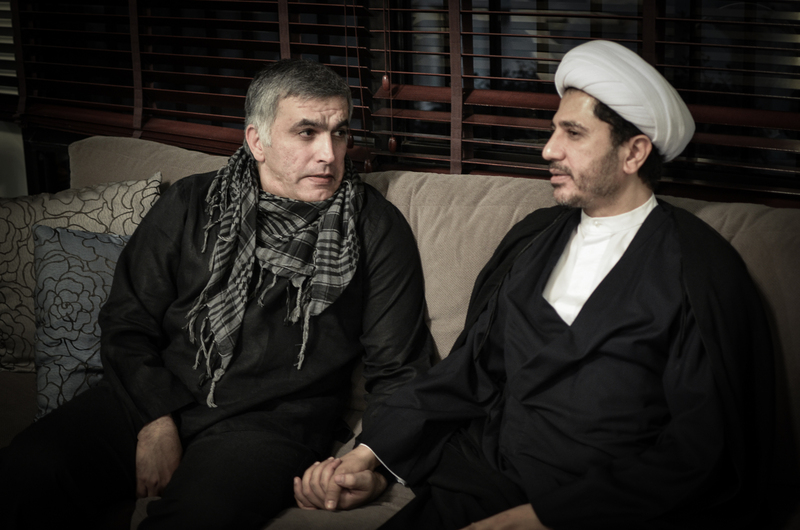 Accusing a prisoner of violence is potentially useful for the repressive regime. Terrorist labels are particularly effective: in the eyes of many, they instantly de-legitimize the actions and the plight of the prisoner and justify the use of repression by the government. Such accusations can therefore severely damage the HRO campaign in question, arguably beyond repair. Damage can further extend to other campaigns in support of prisoners of conscience.  If such campaigns have been hampered by government claims of terrorism, HROs may direct their limited resources elsewhere.

In our survey, one half of our participants were randomly selected to read a vignette that, in addition to the information above, mentioned that Mr. Rajab was declared a terrorist by the Bahraini government (treatment group). The other half of participants read a vignette that made no reference to this declaration, but was otherwise identical (control group).

We sought to find whether the terrorist label would affect (1) how upsetting participants found the case of Mr. Rajab, (2) the extent to which they trusted the information presented by the vignette, (3) their willingness to support a campaign asking to drop all charges against him, (4) their willingness to sign a “call for action” petition of the same, and (5) their intent to donate to Amnesty International in support of this cause.

Our preliminary findings suggest that repressive governments can damage the effectiveness of HRO action.

Our preliminary findings suggest that a terrorist label affects the emotional reaction of individuals: participants in the treatment group, on average, felt less upset about Mr. Rajab’s case. The preliminary findings also suggest that individuals exposed to the terrorist label are less likely to sign a petition in support of Mr. Rajab. When participants were not told about the terrorist label, 49% were willing to sign such a petition. Of those who were told about the label, only 35% were willing to do the same. A terrorist label, however, does not appear to affect the level of trust in information presented, the willingness to support a campaign without signing a petition, or the willingness to donate to an HRO.

Overall, our preliminary findings suggest that repressive governments can damage the effectiveness of HRO action by attempting to discredit a prisoner of conscience. They further suggest that the point of vulnerability is not centered around donations, but earlier in the process of mobilization. Potential supporters of a campaign are likely to be dissuaded from merely putting their name on a support list because of a negative label.

Since much of HRO’s success rests on its ability to mobilize individuals to take action, the power to turn away potential advocates at an early stage can considerably impact the way HROs decide for which cases to advocate and which to skip. For those who face political imprisonment on the ground, the consequences of such decisions may be nothing short of devastating.

Because our findings demonstrate the effectiveness of labeling, they might offer repressive regimes an additional incentive to pursue such approaches.  While the ethical concerns should not be ignored, we believe that these findings are not providing a roadmap for regimes to effectively counter NGO calls for action.  Repressive governments are already engaging in labeling.  The idea of security through obscurity—that is, a weakness not identified is a weakness that will not be exploited—therefore does not apply here.  As regimes are already employing this tactic, a delay in engaging with its effects may cause more harm than good.  By establishing the deleterious effects that terrorist labeling can have on calls for action, this research may help activists anticipate such maneuvers and develop ways to counter the tactic.  In addition, as audiences learn about the use and effects of false labeling, they may themselves change their reactions to such claims. Future public opinion research may be critical in developing methods to help those that have been incorrectly labeled a terrorist by a repressive regime.