The aspirational vision of the 2030 Agenda for Sustainable Development is to “leave no one behind”. The 17 Sustainable Development Goals (SDGs) and 169 targets are a demonstration of the global community’s urgency to eradicate poverty and significantly minimise inequality. Of course, the achievement of these goals is directly linked to the quality of governance, specifically the nature of citizens’ participation in the process. Developing partnerships between governments, citizens and the private sector is essential for the achievement of the SDGs, and nowhere is this more critical than in Africa.

African civil society has continuously found novel solutions to multifaceted development challenges. However, this indispensable role of civil society is under siege as its formal and informal groupings face increased constraints in their operating environment. Since 2012, the International Center for Not-for-Profit Law (ICNL) has identified more than 20 restrictive laws and regulations that inhibit the freedom of assembly and expression in Sub-Saharan Africa.

Within the past four years, there has been an upsurge of restrictive laws affecting funding, requiring registration, curtailing protests and targeting particular groups and minorities. Policies in Uganda, Ethiopia, Sudan and the Gambia all reflect this disquieting trend. In addition, governments have passed a significant number of laws that have increased the surveillance on the operations of civil society and affected their ability to operate freely. Some of these laws are public order acts, as well as anti-terrorism and information interception legislation.

There is also an increasing trend of governments introducing more stringent financial and administrative controls through the promulgation of specific laws. Governments use these requirements to interfere in the establishment and operation of CSOs. For example, in countries such as Liberia, Ethiopia, and Burkina Faso, certain government ministries have the power to nullify the registration documentation of organisations that change their mission, thematic focus and are suspected to have “questionable” funding sources. There have been concerns about the basis of these decisions and the potential restrictive nature of these administrative procedures. These actions tend to be arbitrary and CSOs have little if any option to appeal. These restrictive policies impose burdensome reporting requirements on CSOs, especially relating to foreign sources of funding and eventually cause many CSOs to stop work altogether. 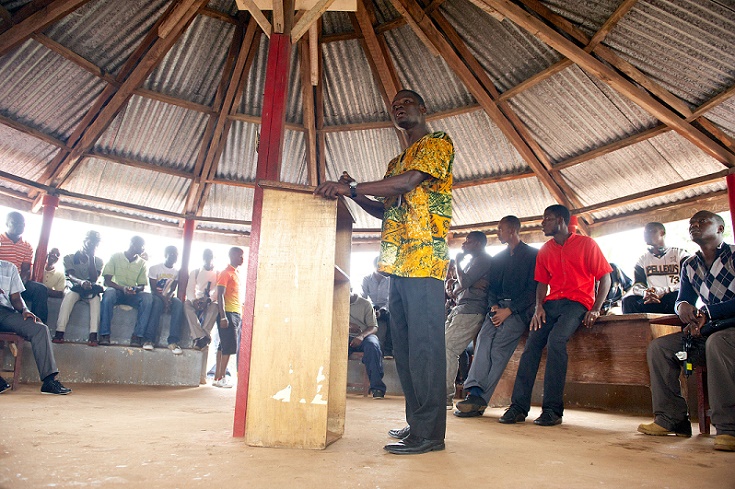 Civil society organizations throughout Africa, such as this student rights association in Liberia, are facing increasingly arbitrary restrictions on assembly, funding, and bureaucratic practices.

In some African countries, fundamental freedoms—including the freedom of assembly and —are increasingly threatened. This constrained environment is a barrier to organizations, individuals and pressure groups that work on human rights and anti-corruption campaigns. In Cameroon, Democratic Republic of Congo, the Gambia, Burundi and Angola, for example, there are numerous detainees and political prisoners languishing in prisons for exercising their freedoms of opinion, assembly and/or peaceful public demonstrations.

There has also been an increase in the number of activists that are threatened because of their advocacy work. In Cameroon, Sierra Leone and Liberia, civil society members face difficulties in challenging the increased land and mineral expropriation that are disadvantageous to ordinary citizens. There have been cases of severe torture, targeted killings, enforced disappearances, abductions, and judicial harassment perpetrated by the police and other security agents, in particular against journalists, bloggers and activists that fight for marginalised groups.

In addition to all of this, the emergence of government-sponsored CSOs in Africa is posing a threat to genuine groups as they compete for funding, legitimacy and credibility. These CSOs are popularly referred to as “Government Organized Nongovernmental Organization” (GONGOs) and embed themselves within civil society coalitions and networks, often seeking to scuttle the agenda of independent groups and movements.

The SDGs have outlined indicators that seek to institutionalise the role of active citizens and CSOs.

To a considerable extent, the SDGs have outlined indicators that seek to institutionalise the role of active citizens and CSOs. This is a progressive step, especially due to the criticism the MDGs received when the explicit roles of citizens were not defined. For example, Goal 16 seeks to promote peaceful and inclusive societies for sustainable development, provide access to justice for all and build effective, accountable and inclusive institutions at all levels. Also, Goal 17 seeks to strengthen the means of implementation, revitalize the global partnership for development, and it emphasises the need for citizen engagement and participation as an essential catalyst.

Goals 16 and 17 present several opportunities for African citizens to articulate its demands for a more inclusive space for engagement and participation at the country level. But there must be a concerted effort to ensure that citizens participate in the planning, implementation, follow-up and accountability of both goals.

The Transparency, Accountability and Participation (TAP) Network has taken a step to concretize citizens’ involvement by developing a Goal 16 Advocacy Toolkit. The toolkit provides detailed guidance on opportunities and entry points for working with governments and other local, regional or international stakeholders to support the planning, implementation, follow-up and accountability of Goal 16 commitments. TAP is currently open to collaborations from CSOs in Africa to customise the toolkit and advance citizens’ engagement in the process.

CSOs also need support in empowering citizens to influence national governments to work towards the achievement of both goals. CIVICUS spearheaded a global citizens platform, named the Action for Sustainable Development to find better ways to connect and promote learning and to support citizens to widen and deepen their participation in sustainable development institutions and processes. Initiatives like this provide the opportunity for building solidarity and are an important catalyst to enable people-powered accountability and support the mobilisation of citizens.

In addition, civil society should participate actively in the processes of localizing these two goals. It will be imperative for civil society groups to ensure that national development plans and indicators of progress are specifically tailored to each country’s context.

Currently, the West Africa Civil Society Institute and other groups who form the African CSO Working Group on Agenda 2030, under the auspices of the African Regional Forum on Sustainable Development (ARFSD), meet periodically to review and refine continental strategies to ensure inclusive and integrated implementation. However, there is inadequate participation, especially of West and Central African governments and citizens’ groupings. This is where sub-regional mechanisms could help to foster information sharing, feedback and progress of civil society involvement and contributions to national efforts towards the implementation of Agenda 2030.

It is essential that civil society recognise its responsibility to ensure that the SDG implementation process is people-centred. African civil society groups have the convening power to create tactical spaces for citizens and policy experts to reflect on national priorities, opportunities and resources and identify indigenous approaches to work with national and local governments, the private sector and other community institutions. It is critical that SDG implementation is not seen as being government-led but instead is propelled by collaborations across all sectors and facets of society.

Charles Kojo Vandyck is the Head of Capacity Development, specialising in civil society governance and sustainability, for the West Africa Civil Society Institute, a not-for-profit organisation that strengthens the institutional and operational capacities of civil society organisations in West Africa.

Maame Darkwaa Twum Barima is the Programme Assistant in Communication and Information, specialising in development communication for the West Africa Civil Society Institute, a not-for-profit organisation that strengthens the institutional and operational capacities of civil society organisations in West Africa.