Recent global assemblies make it clear—to achieve the SDGs we need to find ways to hold governments, UN agencies and the private sector accountable for the pledges they made.

In the last few weeks, two major global forums took place. Both were trying to address relatively similar challenges, and a common thread—the urgent need to change—ran  through both. The first was the United Nations High-Level Political Forum (HLPF). The HLPF brings UN Member States together to oversee the implementation of the 2030 agenda, also known as the Sustainable Development Goals (SDGs).  The SDGs provide a plan of action to address many of the challenges faced by our generation.  The second was the World Social Forum (WSF) which is held once every two years. The WSF is the largest global gathering of civil society trying to find solutions to the same challenges.

The HLPF was highly formal, at times superficial and based on the rules and etiquettes of the United Nations. Civil society was involved and had official space to interact with the intergovernmental platform; however, this space was very limiting with little chance to influence the debate.  Twenty- two countries volunteered and presented their “voluntary national reviews” on progress made on the SDGs. These reviews varied in methodology and quality.  There was scanty use of indicators to measure progress on the SDG targets. Most countries, if not all, are yet to begin work on domesticating the global indicators to their own national context and circumstances. Some counties did make attempts to involve civil society and other stakeholders in these review processes. Too often, however, they just made a litany of promises on what they intend to do. 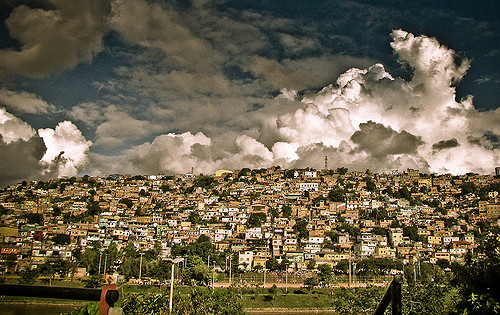 Symptoms of poverty are displayed in a large favela in Belo Horizonte, Brazil. Governments in many parts of the world are failing to provide essential services like access to health care, education, quality housing, sanitation or drinking water with no accountability.

The HLPF was a talk shop with little meaningful dialogue and zero accountability. The Q & A sessions had limited time and states were not really engaging in a spirit of holding each other to account.  Even though civil society had access, it had to work within tight procedures.  There was no real discussion on the key issue - tackling the inequalities and discrimination which is the reason people and nations are being left behind.

Civil society reacted to this disappointing forum by issuing a joint letter signed by over 240 NGOs giving recommendations on ways to improve future HLPFs. It demanded greater involvement of all stakeholders in the review process itself. The letter also makes a strong case for parallel reports. These reports could be from thematic experts or civil society; they would add to the information in the official report and if permitted show the openness of governments to diverse inputs and opinions.

The WSF, on the other hand, brought together over 35,000 civil society actors including  activists, social movements, trade unions, NGOs, community groups, campaigning groups, academics, students, and faith-based organisations.  The WSF is an informal, open, participatory space where everyone has a voice.

Many of those attending, including online participants, were demanding change and debating ways to achieve it. As part of this effort, Amnesty International uses a wide range of tactics ranging from research, campaigning, advocacy and activism to bring about positive social change and advance human rights.

The social contract between the people and their government is eroding.

Human rights, conflict, climate change, corporate bullying and greed, tax evasion, land struggles, inequalities and many more issues were deliberated at the WSF. A key message emerging was that one of the main reasons for the current state of affairs is the total lack of accountability by those in power.  The social contract between the people and their government is eroding. Amnesty’s own research shows how governments in most parts of the world are failing to provide essential services like access to health care, education, quality housing, sanitation or drinking water with no accountability. People are routinely denied access to information and justice. This is despite the fact that for the vast majority of countries these services are all legally binding human rights obligations. Yet their denial is met with complete impunity by those wielding economic and political power.

What the WSF made clear is that—for civil society—business as usual is not an option. People and the planet are facing an unprecedented number of challenges. If these are not seriously addressed, it could lead humanity down a path of self-destruction. The current economic model which rewards greed and creates high levels of inequality is clearly not working for most people, or for the planet, and neither is it bringing greater prosperity. The UN in its current form needs to change in order to deliver its mandate of international peace, security, human rights and sustainable development. There needs to be an integrated and cohesive approach between different UN agencies, government ministries and civil society, especially at the country level.

Even though civil society was involved to a large extent in the development of the 2030 Agenda it would be foolish to fall for it hook, line and sinker. The agenda is ambitious but it has a very weak system for accountability. Under the guise of national sovereignty, or citing a lack of capacity or resources, some governments will try and get away with doing nothing new or different as part of this agenda. The promises governments make cannot be accepted at face value. The message from the WSF was that we need to be vigilant and hold the feet of the governments, UN agencies, private sector and our own to the fire. As is evident from the convergence of assemblies at the WSF, there is a real hunger for urgent and real change. If the calls for action are not heeded history will repeat itself, society will force change, and at times at very high cost.