What can the “Pope of the poor” really do in a Mexico of props?

The Pope’s visit to Mexico could have pushed for change, but politicians masked the country’s true suffering with spectacle.

The current Pontiff, who recently made his first official visit to Mexico, is recognized as “the Pope of the poor”, of changing times, of Christian social thinking. Without question, during his visit to Mexico not only was he a charismatic figure, but he was also a protagonist for the denouncement of human rights abuses. In fact, the Pope coined the term “Mexicanization”, to refer to the social decay marked by drug trafficking, corruption, insecurity and violence in the extreme.

Mexico has come into the spotlight over the last several years for the victimization of Mexican and Central American trans-migrants, and for the thousands of cases of death and disappearances in a country overrun by criminal organizations. According to Ansa Latina, the violent spiral of drug trafficking gangs, along with the support of the Armed Forces, has led to more than 100,000 deaths, 27,000 disappearances and some 250,000 internally displaced.

Leaders welcomed the Pope’s visit solely as a ceremony of spectacle, not to listen what he had to say.

But the meeting between the Pope and Mexican political leaders did not go smoothly, due to his marked interest for the defense of human rights and social Catholicism. Pope Francis underscored his concern about the impact that neoliberalism has had on problems of migration, poverty, materialistic culture, social exclusion and environmental deterioration. But religious interventions in Mexican politics are regulated by a rigid constitution, which has put the brakes on any direct action taken by the Catholic Church in public life. In other words, leaders welcomed the Pope’s visit solely as a ceremony of spectacle, not to listen what he had to say.

Yet there were other social expectations around his visit. Leftist militants and human rights activists, to certain religious Catholic congregations of a progressive cut—and receiving no support on behalf of the ecclesiastical Mexican leadership—wanted the Pope to take a firm stand on matters regarding flagrant complicity between the state and criminal entities, as was the case with the forced disappearances of the students from Ayotzinapa. Another group was hoping that he would ask forgiveness from the victims of pedophilia within the Catholic Church, above all in the case of Marcial Maciel, founder of the order of The Legion of Christ. But none of that happened.

Above all, the Pope presented himself as a missionary and pilgrim. He warned that when politics do not look out for the common good, the country becomes fertile ground for corruption, drug trafficking, violence and insecurity. He vigorously urged the politicians to promote authentically human politics, and he pressed them to not repeat the kinds of laws that stem from a worldwide “throw away culture” (e.g., valuing money over the value of human life and the natural world). But within a few minutes of finishing his speech, there was an avalanche of applause and cheering, “selfies”, and the ritual of the “kissing of the hands” from the secretaries of state and their wives. Once again, spectacle overrode substance.

Of course, the Pope chose to go to places during his pastoral visit that symbolized social national problems: the Basilica, the place where the Virgin of Guadalupe is found (symbol of the compassionate mother of the indigenous and those who suffer); San Cristóbal de las Casas in Chiapas, headquarters to the indigenous theology promoted by Samuel Ruiz; Ecatepec, town in the State of Mexico with high rates of marginalization and exclusion of the young; Michoacán, home of drug trafficking cartels and collusion of police forces; and finally, Juarez City in Chihuahua, famous for its brutal maquiladoras, femicide, and the victimization of millions of migrants looking to cross the border. 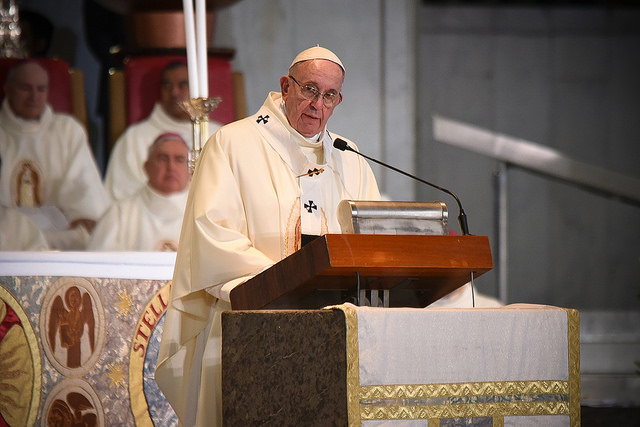 Pope Francis leads mass in Mexico City at the Basilica Cathedral of our Lady Guadalupe.

Yet, in each one of these places a landscape of props was put into place, and instead of native spectators and representatives of the social periphery (e.g., the elderly, young people, patients, prisoners, migrants, indigenous workers, etc.), the government roped off areas in the first few rows to be occupied by “the privileged”, those with VIP invitations from businesspeople and politicians.

Nevertheless, the Pope spoke with moral authority and showed his awareness of the difficulties that were happening in each place that he visited. He denounced motives and those responsible. He exhorted the need for urgent change so as to be able to come out from these problems. He urged for a culture of inclusion of diversity (indigenous, young people, women or men, divorced or imprisoned) set against discrimination policies. During his visit to Chiapas he laid out his concern about the world’s environmental situation and advised learning from the indigenous and the elderly to live in harmony with nature. He directed his speeches with severity to certain sectors of the social elite, among them the leaderships of the government, the Church, and the labor union. He questioned the prison system. He made a gesture to accept those who are divorced. He said the problem with forced migration is the problem of our era. He denounced poverty as the seed of drug trafficking and violence. For his part, he also spoke with sweetness and brought words of hope. He laid out the values of compassion, forgiveness and solidarity as fundamentals.

Yet during his last day in Juarez City, Pope Francis took an apocalyptic tone with his sermon. He compared the border with the people of Nineveh that deserve to be destroyed because of their decadence, and as if he were the prophet Jonas he made an urgent call for heartfelt conversion to avoid the next cataclysm. He urged them to make Mexico into a land of opportunity and not a land for traffickers of death.

Even so, his intense missionary activity and good intentions were obstructed by a Mexico of pretenses that—for television spectacle—took great pains to show a fictionalized country through cultural nationalism. His accesses to private audiences were not for the people in the margins, like he proclaimed, but were fundamentally for the elite business administrations, politics and clericals. At his Mass in Juarez City, the parents of the 43 missing students from Ayotzinapa did not attend. Father Solalinde, one of the most active Mexican priests in the defense for migrant rights, was also absent. These important symbols for Mexican human rights were not invited, which was truly a missed opportunity to take a stand on this visit.

All in all, the Pope’s pilgrimage was done amidst uproarious festivities and jubilation, and among all the noise and fanatical shows, he was unable to truly connect to the deep pain of the Mexican people with a message of hope and conversion.