"To confront attacks on women and land simultaneously, we have had to learn to tackle discrimination and dismantle unequal power relations in all spheres at once." 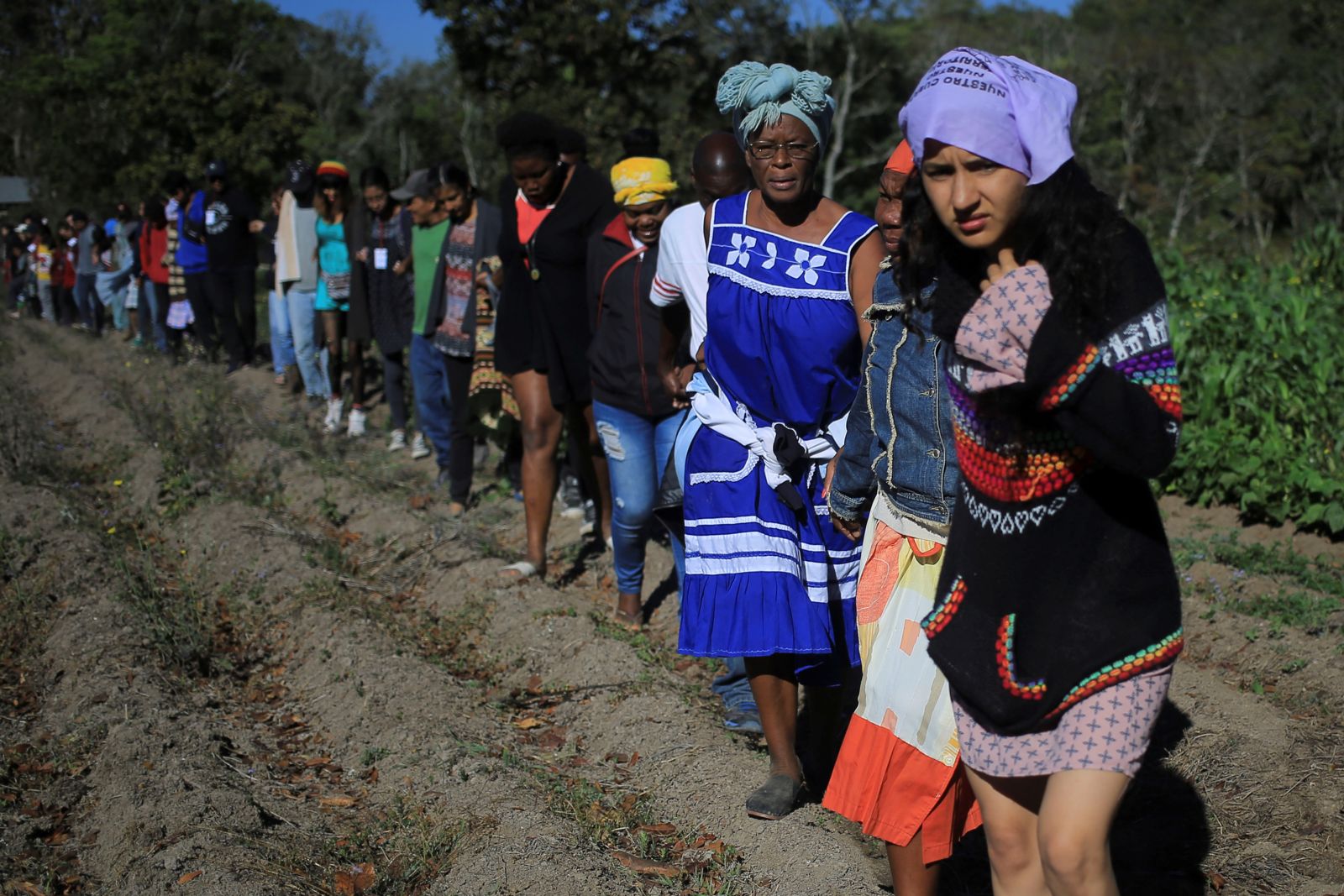 Berta Zúñiga (r), daughter of the environmentalist Berta Cáceres, attends a rite to commemorate the three years of the murder of Cáceres in La Esperanza (Honduras). EFE/Gustavo Amador

Extractive industries, monoculture, energy, and tourism mega-projects have invaded indigenous and communal territories around the world, causing conflicts, criminalization, displacement, and environmental destruction. Communities, often led by indigenous women, are fighting back against this invasion. For defending their land and territory, women human rights defenders have targets on their backs.

Attacks on women land defenders can lead to assassination. They weaken leadership, generate internal tensions, and drain communities and movements of time, energy, and resources. One of the co-authors, Lolita Chávez, Maya K'iche ', has suffered six assassination attempts, sexual harassment, raids, smear campaigns and more than 25 lawsuits against her. Despite having precautionary measures from the Inter-American Commission Human Rights, she has been forced into exile to protect her life and that of her family.

In this hostile context, indigenous communities and peoples are building new models of collective protection, based on respect for the web of life, mutual care, equality, and social justice. Collective protection combines community knowledge, forms of organization, and support networks built up at the national and international level. When there is a strong, supportive, and well-organized social fabric, it is more difficult for perpetrators of violence to intimidate, divide, or quell resistance. A community-based, collective protection model activates a network of immediate support based on the culture, capacities, and existing resources in the places and organizations where defenders work.

The process begins with the construction of collective power. When communities carry out community consultations or when they block the entry of mining companies, their territories are protected from the damage, violence, and harmful effects of extractivism. In other words, they become more united and less exposed to risks. Their capacity to protect themselves increases. Faced with this aggressive phase of extractivism, collective power must confront the current economic and social model while reducing risks.

Collective protection also requires consolidating models of coexistence that reject all forms of violence and focus on the care and protection of the entire web of life. This includes building just and egalitarian relationships within families, communities, and organizations. That’s why women are central to implementing collective community protection strategies.

A community-based, collective protection model activates a network of immediate support based on the culture, capacities, and existing resources in the places and organizations where defenders work.

The deep understanding of territory as a web of life that connects with our own bodies and histories creates a link between the fight to defend women’s bodies and the defense of the territories that sustain us. Women in Mesoamerica and throughout the world lead struggles to defend both territory and women’s rights, standing up to the many ways that patriarchy uses violence against women as an instrument of social control to weaken movements and usurp natural goods in the lands they defend.

To confront attacks on our bodies and lands simultaneously, we have had to learn to tackle discrimination and dismantle unequal power relations in all spheres at once. Collective protection seeks to create a space for women’s safe participation in conditions of equality by recognizing and denouncing the often-unspoken violence that women defenders experience. It means addressing the extra burdens of domestic and care work. Examples of effective measures include establishing agreements and internal mechanisms in organizations to deal with sexual harassment; supporting activists who are experiencing family violence; and providing collective childcare so women can participate. It is also important that men embark on their own path of transformation that begins by recognizing and questioning the sexist practices in which they have been socialized.

The great Honduran feminist and indigenous leader Berta Cáceres, murdered on March 3, 2016, said, “It’s not easy being a woman leading processes of indigenous resistance. In an incredibly patriarchal society, women are very exposed, we have to face high-risk circumstances, and sexist and misogynistic campaigns. This is one of the strongest pressures to abandon the struggle—more than the transnational [company], the macho aggression from all sides.”

Another fundamental aspect of the collective protection model is to recognize and encourage the leadership, voices, and contributions of women, and to strengthen women’s participation. Fully recognizing the role of women transforms collective power in many basic ways —by building new leadership and capabilities, by granting authority and legitimacy to women’s voices, and by breaking down traditional roles. Effective tools include trainings to strengthen collective leadership by and for women land defenders, and creating safe spaces— protective networks and healing processes among them. One organization that has implemented these tools is Just Associates (JASS,) which has advanced this work with partner organizations though its Mesoamerican Initiative of Women Human Rights Defenders and the Alchemy Feminist Leadership School for indigenous and rural women.

Challenges for protection organizations and the international human rights community

A collective protection model that connects defense of territory and body-territory challenges current models of individualized protection. Focusing protective measures on the individual often generates conflicts within organizations. Measures sometimes remove the defender from her community for safety reasons, weakening the collective struggle.

To support developing community models of collective protection, and women’s safety and leadership within them, requires a shift in how we view protection. These are some of the needed steps:

1. Revise our narratives to use language that reflects the breadth and severity of the problem of violence against defenders, and the urgency of moving toward systemic changes.

2. Strengthen collective protection processes based on the knowledge and guidance of the communities and women involved, reconsidering previous individual-based, protection strategies. Without denying the need for immediate support when a defender is at risk, we must also increase efforts to build a protection approach that addresses the collective impact of violence and emphasizes collective security as the basis of personal security.

4. Support forms of self-protection developed from below. As human rights defenders, we constantly document and denounce violence and its impact on communities. We are creating our own networks, safe spaces, and healing processes. It is necessary to support these efforts and recognize these visions, strategies, and organizations, based on women’s own concepts of feminism, worldview, and territory.

All of this implies building much more active solidarity to identify and denounce the perpetrators of violence and the structural violence of the current system that originates in colonial policies, extractivism, and forms of consumption in northern countries. We need to build and coordinate work directed toward investors, banks, and international financial institutions to stop financing projects that seize peoples’ lands, cause conflicts, and destroy the environment.

As threats multiply, from the pandemic to increased violence, it’s time to listen to the indigenous peoples who offer a model of society based on respect and the sustainability of life. It’s time to listen to women and our determination not to continue supporting a system that oppresses, represses, and violates us—in our bodies and our lives.

To effectively protect human rights defenders, it’s time to put collective protection and caring for life at the center.

The authors thank the Fund for Global Human Rights for its support for the work and the report.

Lolita Chávez Ixcaquic is a member Council of K'iche 'Peoples for the Defense of Life, Mother Nature, Land and Territory (CPK).

Laura Carlsen is a member of JASS and on the Coordinating Group of the Mexican Network of Women Human Rights Defenders.