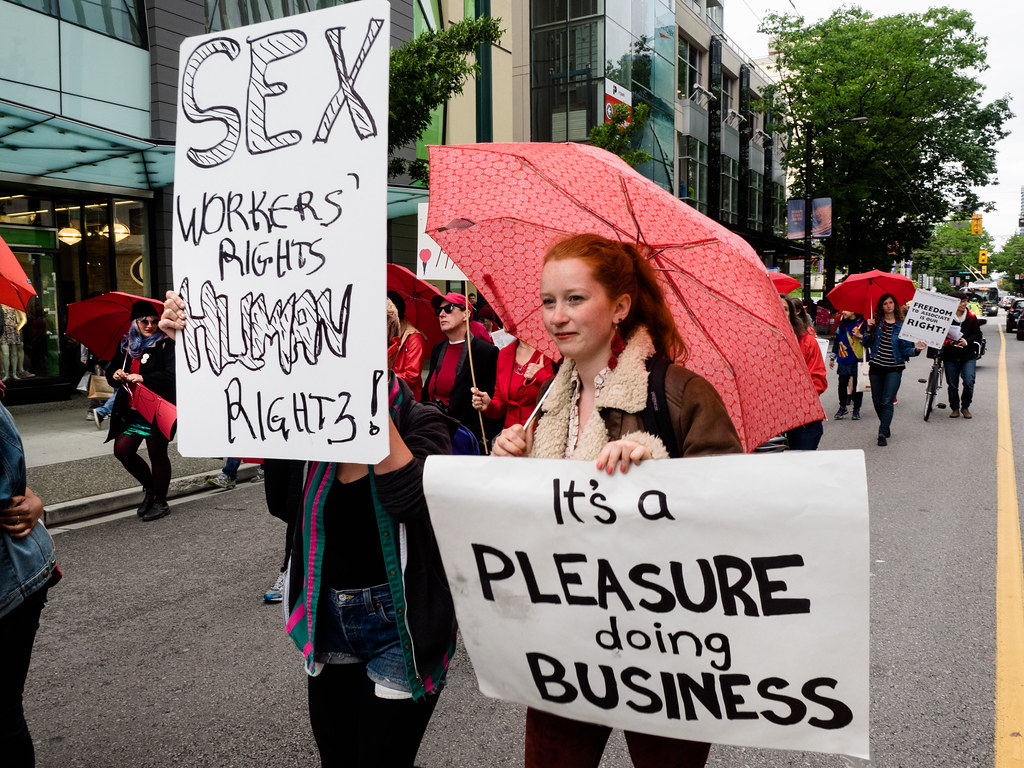 Sex workers and allies march together for a march in Vancouver in June, 2016. Pictured here is the red umbrella, which is the symbol of the global sex workers’ rights movement.  Sally T. Buck/(CC BY-NC-ND 2.0)

Over the past two decades, global advancement of sexual and reproductive health and rights (SRHR) has been patchwork at best. While international human rights treaties espouse a constellation of rights related to sexuality and reproduction, many nations continue to defy their legitimacy. The promises of international human rights law (IHRL) are thus undercut by the realities of persistently-high maternal mortality, the continued criminalization of sex work, the disenfranchisement of people of various sexual orientations and gender identities, and the denigration of abortion and contraception rights and access. Perversely, the very fact of international treaty support for SRHR in many countries can cause advocates to lose ground, as critics level attacks on an “over-weaning” international regime. We categorize those countries that flagrantly disdain and flout IHRL with respect to sexual and reproductive rights as “scofflaw,” to co-opt a colloquial term used in the US in the early 20th century to denote law breakers.

In this piece, we illustrate the continued usefulness of international human rights concepts, frameworks, and principles in challenging regression on SRHR in scofflaw countries, work that is possible even without citing international treaties directly. We argue that rights concepts can bolster SRHR claims by honing our critical analysis of harms and expanding our imaginative capacity as scholars and advocates. We rely on examples from the US, one of the leading scofflaw countries, which paradoxically participated in drafting international human rights treaties by which it has since refused to be bound. Our argument considers both strengths and some dangers in using rights in a “treaty-free” way.

First, a brief meditation on what we mean by rights talk in this context. When we discuss the human rights most useful for advancing SRR in countries like the US, we refer to the newer “version” of rights built over the last three decades from within international treaty obligations. This version understands domains of sexual and reproductive life, and the linked but distinct domains of gender and race, as constituted by systems of power that rights have a role in dismantling. This version of rights also supports the capacity to determine one’s life across public and private domains, and to extend state accountability to non-state actors, from the husband to the trans-national corporation. Understood this way, rights talk moves beyond liberal theory’s abstract individualism and grapples with the structural conditions (in markets, housing, education, labor, scientific knowledge, etc.) necessary to realize SRHR.

Our argument considers both strengths and some dangers in using rights in a “treaty-free” way.

This version of human rights—built through theorization and practice globally—functions in two ways: it is at once a law-based practice and an act of radical political imagination. These functions help us to identify the continued instrumentality of human rights in the face of regression. International human rights concepts, frameworks, and principles can be mobilized without invoking IHRL explicitly in order to 1) clarify acute and systematic failures to protect SRHR and 2) imagine and articulate a different vision for the affirmative fulfilment of health and rights.

Two examples serve to illustrate this “treaty-free” approach; while we rely on examples from the US drawn from our work with Global Health Justice Partnership (GHJP), we recognize that there are many other ways and strategies for doing this kind of under-the-radar yet subversive human rights work around the world.

In 2017, GHJP collaborated with the Black Mamas Matter Alliance (BMMA) and Center for Reproductive Rights (CRR) to support advocacy on maternal health and racial justice in the state of Georgia. Our final report identified state-level policies and institutional practices perpetuating devastating and racially-inequitable rates of maternal mortality. We used the now-established rights framework of “respect, protect, and fulfill” to flag sites of state (in)action—legislative, fiscal, administrative—which led to the abrogation of the rights of pregnant women of color. We mobilized the concepts of state obligation and accountability, along with reproductive justice frameworks, to develop new and empirically-grounded analyses that linked state policy decisions on healthcare funding and Medicaid expansion to maternal health outcomes.

Another more recent US example was GHJP’s collaboration with the Sex Workers and Allies Network (SWAN) in New Haven, Connecticut to develop a peer-led survey on the experiences of street-based sex workers seeking social services. Our joint analysis highlights structural barriers to adequate services, including but not limited to criminal legal system surveillance. The AAAQ (availability, accessibility, acceptability, and quality) assessment model, established by the Committee on Economic, Social, and Cultural Rights in 2000, framed our evaluation of services and helped reveal barriers such as ad hoc clinic hours, abusive treatment, and substandard care. The report uses the AAAQ model to tie such failures to specific state and city legislative policies, funding decisions, and gaps in monitoring/accountability.

Mobilizing the language of international human rights in analyses on state and municipal SRHR outcomes in a country like the US may not seem particularly useful. In our Georgia report, we acknowledge outright that many domestic policymakers “are not necessarily concerned with whether or not state practices adhere to human rights principles.” So why did we nevertheless inject them into our advocacy?

First and foremost, international human rights concepts uniquely bolstered our analysis of state practices: they clarified connections between upstream policy decisions and downstream health outcomes for pregnant women of color in Georgia and sex workers in Connecticut. Although the obligations we attached to the state were not framed with reference to UN treaties, global human rights allowed for the identification and systematization of harms that may otherwise have been difficult to catalogue and attribute to root causes.

Human rights frameworks didn’t just help organize our critiques of broken systems; they also provided the glue for us as researchers to collaborate with advocate partners and imagine affirmative fulfilments of SRHR. For instance, human rights frames helped GHJP to continue engaging with SWAN in crafting demands for city policymakers, such as this AAAQ-informed analysis on the COVID-19 response in New Haven. The imaginative capacity of human rights language enables discussions of radically different futures characterized by welfare and well-being in “scofflaw” countries where preventing harm is usually the (minimalist) primary focus.

We see human rights as a powerful way to translate international principles into transformative, empirically-supported, measurable domestic policy demands. However, the choice to wield human rights in somewhat covert fashion—without direct reference to international legal obligations—admittedly has its downsides. What is gained in local political traction comes with a potential loss in human rights awareness: domestic policymakers in laggard countries get no exposure to the idea of legally-binding international human rights nor to reflecting on their acts as part of a common global commitment.

Yet our pragmatic strategy is a function of collaborating with on-the-ground advocates whose commitment is to the world within their grasp; they regularly make demands of policy-makers who don’t give a damn about flouting IHRL norms and UN treaties.  For this reason, we note in closing that the practice of using rights covertly is not uncommon among advocates working in constrained contexts: the transformative trick is to use a common set of principles, derived from the content of IHRL, so that the “gotcha” hook of international obligations can be made at the right time, even in scofflaw countries.

Alice M. Miller, J.D. is the co-Director of the Global Health Justice Partnership of the Yale Law and Public Health Schools, where she teaches. Her scholarship and advocacy focus on the intersections of gender, sexuality, health and human rights in both US and global contexts with specific attention to criminal law as a key structural determinant of health and social inequalities.

Ann Sarnak is a law student at Yale Law School and former Student Co-Director of Yale Global Health Justice Partnership. She holds MSc in Comparative Social Policy from the University of Oxford, where she concentrated in labor and housing policy.