Capitalizing on the brain’s capacity to simulate events, messages of positive behavior – instead of repeated exposure to accounts of abuse – could better lead to the changes we wish to see in the world. 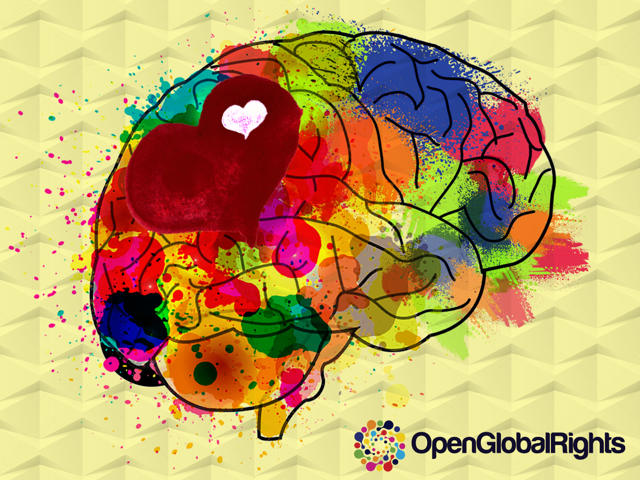 Throughout the last few decades, much human rights work has necessarily sought to bring human rights abuses to light. But focusing only on abusive behaviour—without paying attention to its opposite—comes with a cost.

According to psychological and neurobiological research, repeated exposure to accounts of human rights abuses may inadvertently prime individuals to engage in the very acts we hope to eliminate; for example, repeated negative actions by some in a particular group come to be seen as normal behaviour for the group as a whole. As a result, activists must strike a balance between exposing abuses and demonstrating positive human rights-oriented behavior. By capitalizing on the brain’s capacity to mentalize and simulate events, messages of positive behavior could lead to the changes we wish to see in the world.

Some of the darkest moments in human history have their roots in the dehumanization of groups and people. If human rights activists can see what lies behind these trends, they can work to tackle the root causes and not just the symptoms of dehumanization. Research shows that many processes involved in dehumanization aren’t necessarily grounded in a lack of empathy for the victimized group. Instead, they are based in neurobiological mechanisms oriented around maintaining one’s own group at all costs. In fact, failures to promote positive, pro-social behavior might not rest in our ability to empathize with the “Other” but in the degree to which we identify and align with our own group.

Extreme human rights abuses often have their roots in powerful neurobiological mechanisms that lead humans to mirror or simulate what they see others in their group doing. Very recent research  shows how repeated exposure to hate speech, such as repeatedly reading it on local media, could prime your brain to engage in hateful speech or even hateful actions.

For human rights defenders, this can become dangerous: every time an organization, news source or media outlet emphasizes and repeatedly highlights a form of human rights abuse, even to condemn it, we are simultaneously engaging a very specific component of the social brain that emphasises compliance with the norms of our own group. Over time, the social brain will justify these acts and will find ways to divest our group of responsibility.

Moreover, a landmark study in 2012 showed that feeling connected to a group not only creates disconnection from more distant “others”, but could directly lead to dehumanization of those communities. The experiments indicated that the more people feel socially connected to closely-knit groups, the less likely they are to attribute human mental states to distant others. They are also more likely to recommend harsh treatment for those distant others.

But is empathy the whole story? A great multitude of non-profit organizations worldwide have worked tirelessly to increase empathy between groups, albeit largely by raising awareness about the suffering of marginalized groups or asking people to walk in other people’s shoes. Yet failures to empathize with others happens all the time.

Research has shown that when presented with images of people in pain, activation of the parts of the brain where empathy resides was significantly less for strangers than for loved ones or people of the same race. Other tests show that it is easier to promote aggressive behavior in interactions between groups than between individuals. When social relations shift from “me versus you” to “us versus them”, human interactions tend to become substantially more aggressive.

For example, in one experiment researchers examined whether acting as a member of a competitive group, versus acting alone, would ultimately lead to increases in one’s willingness to harm competitors. Using functional magnetic resonant imaging, or fMRI, participants were asked to perform a competitive task, once alone and once within a group. These same participants were later asked to engage in an activity where they had an option to harm competitors from another group. Results showed reduced brain activation related to empathy and moral decision-making among participants acting within the group, compared to participants acting alone. This reduced activation was later linked to their willingness to harm a person in another group.

The warning for human rights activists is that suspending our sense of individualized morality in favor of group-based norms is among a series of influential factors leading to dehumanization. But how do we reverse concepts of dehumanization once they have already occurred? And if these processes are deeply embedded within unconscious, psychological and neurobiological mechanisms that have evolved over hundreds of thousands of years, is it even possible to defuse and/or rewire them?

The answer is: we don’t have to. What would happen if we used our brain’s ability to mentally simulate an event where, instead of picturing or simulating hurting an individual, we imagined helping them? Researchers examined whether the same mechanisms that underlie processes related to empathy might also work to support the way in which our brain envisions the world, called episodic simulation. Their results showed that not only did the act of imagining helping increase participants’ actual intentions to help others, but also that the more vividly people could imagine a scenario, the more likely they were to help another.

These results have been replicated within the Mindbridge Implicit Bias Project, a series of trainings that capitalizes on the brain’s neuroplasticity in order change an individual’s relationship to bias and discrimination towards social groups over time.

Other research showed concretely the way in which positive episodic simulation coupled with capitalizing on the social brain can result in re-humanization of another group. Held in Israel, the researchers through a series of experiments asked Israeli-Jews to read about members of their group helping Palestinians. They found that Israeli-Jews who became aware about their group helping Palestinians showed greater humanization towards Palestinians.

The challenge for the human rights movement is to counter dehumanization that is seeded by group influence and images of human rights abuses with something different. By modelling the sort of behavior we want to see—kindness, caring and empathy—we can begin to re-humanize vulnerable groups.

If inhumanity can be learned, so can greater humanity. Understanding the brain may help us do just that.

Laura Ligouri is the founder and director of Mindbridge, a not-for-profit organization connecting psychological and neurobiological insight to non-profit and government-sponsored humanitarian efforts.