The refugee regime extends well beyond the 1951 Convention, and a broader contextual view is necessary in debates about change.

As aliens who usually arrive irregularly and in an unplanned manner, refugees can present real challenges for host and transit communities and countries alike. What is more, their very existence often represents an implicit criticism of the country that they fled. In general, then, refugees are something of a political hot potato. Moreover, refugee situations have the potential to produce major controversy at the local, national, regional and international levels, with a range of different actors—including the refugees themselves—pursuing often fundamentally incompatible interests.

Set against this unpromising background, it is hardly surprising that the modern refugee regime has been a regular target of criticism. As early as the late 1940s, Soviet States opposed the UN refugee regime, fearing it might prevent perceived “traitors” among refugee populations in Europe being returned to face “justice” in the USSR. Since that time, policymakers and advocates have persistently demanded “reform” of the 1951 Convention on grounds ranging from opposition to the principle of refugee protection through to dismay that this principle has not been fully implemented.

However, as many of the excellent articles posted to this forum show, the refugee regime extends well beyond the 1951 Convention to encompass a range of other norms, policies, institutions and actors. In considering reform of this wider regime, adopting a broader contextual view of the law and politics involved may prove useful.

In any such debate, calls for reform should take care not to downplay all that the current refugee regime has in fact achieved. Most crucially, over the past six decades, this regime has facilitated the international protection of tens of millions of refugees. It has also provided a broad common framework through which governments and other actors have worked to address the political and humanitarian challenges of “the refugee problem”. 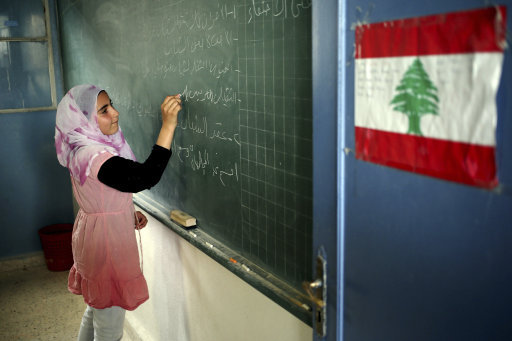 A Syrian refugee attends a public school in northern Lebanon. While there is validity in the calls for reform of the refugee regime, such demands should not downplay the achievements of the current system of protection.

These are significant achievements, especially in the face of the intensely political challenges that refugee flows arguably pose. Of course, this is not to suggest that there are not problems with the refugee regime but simply that, in discussing where it might be taken in the future, we should be careful not throw the baby out with the bathwater. Rather than just identifying weaknesses in the regime, debates about reform should equally acknowledge positive elements of the regime as a basis from which to further strengthen refugee protection in the future.

Deficiencies in the refugee regime have increasingly raised the question of whether it is “fit for purpose”. However, the labelling of this regime as “in crisis” is hardly new but a fairly consistent feature of its history. This might support the case for its replacement but might equally suggest that the notion of “crisis” is in fact intrinsic to that regime and the highly contested and politicised subject matter with which it deals. If the latter is correct, then perhaps looking for ways of better harnessing this aspect of the regime represents a productive new line of enquiry in the refugee field.

Proposals for reform sometimes suggest that the refugee regime is not “fit for purpose” or in crisis due to the purportedly widespread non-implementation of refugee law. Yet the efficacy of any law is always structured by its social and political context. As such, can we really say that refugee law is always implemented less than other fields of law in a given country, including those generally considered “fit for purpose”? Empirically, in any such comparison, I suspect that data would show a relatively high level of implementation of refugee law. If shown to be correct, then this could help underpin a stronger positive political discourse based on existing common respect for refugee law and principles around the world.

The absence of international cooperation on burden sharing of refugees is also often seen as a source of crisis for the regime. Indeed, such arrangements as exist tend to be non-obligatory in character precisely because they are generally not politically appealing to governments. Again, though, is the level of cooperation in the refugee regime really less than in other (politically-controversial) areas of international relations? If it really is not, then the refugee field could glean new insight and inspiration on this area through closer study of how international cooperation works in those parallel contexts.

Talk of reforming the refugee regime often implies a single discrete event, such as renegotiating the “cornerstone” 1951 Convention. However, many of the posts to this forum rightly point to the fact that the refugee regime already regularly adapts to changing circumstances.

The refugee regime cannot be viewed as monolithic and static but rather that it contains its own diverse and dynamic processes of reinvention.

The 1967 Protocol and evolving UNHCR mandate, regional initiatives such as the African refugee convention, Cartagena declaration and Comprehensive Plan of Action, and shifting cultural norms, are all examples of this phenomenon.

These suggest that the refugee regime cannot be viewed as monolithic and static but rather that it contains its own diverse and dynamic processes of reinvention. Greater efforts to understand how such processes of reform come about, how they work, and the tensions that they generate can help us to realistically conceptualise the prospects and direction of any future reform of the regime.

In the meantime, the foundational elements of this regime—including the 1951 Convention, UNHCR’s mandate, human rights and deeper notions of hospitality—continue to provide us with a common language for challenging new developments that may depart from those ideals, as with the EU-Turkey exchange deal.

Finally, refugees themselves are also political actors—and a sizeable political constituency—whose views have sometimes influenced protection practice and may contribute to the reform debate. For instance, during the 1980s, the highly politicised refugee communities in Central America helped to shape political discussions about solutions. Might certain refugee constituencies in the world today play a heightened role in pushing refugee interests locally, or in relation to reform of the regime? If so, how might this be facilitated? At the same time, the challenges in integrating refugee voices should not be underestimated, nor can the content of their views be assumed.

Overall, then, reviewing the refugee regime in its wider legal and political context may provide us with a better understanding of where and how the existing regime is really in need of reform, as well as suggesting new avenues for further strengthening refugee protection in the future.

David James Cantor is the founder and Director of the Refugee Law Initiative at University of London. He has carried out in-depth fieldwork on displacement, criminal violence and armed conflict in Latin America and previously worked with the Refugee Legal Centre and UNHCR.