The refugee protection regime works if it remains limited to those genuinely fleeing persecution — though the Syrian crisis proves again that ways must also be found to protect those at risk of generalized violence.

After much initial openness, the European migration crisis has reached a boiling point.  Germans have become divided over whether to accept the unfortunates who have arrived on their doorstep or to push them away; a deal among European policymakers moves the problem to the Greek-Turkish border, as those arriving in Greece are told they will have to go back if they have already set foot in a safe country (in this case, Turkey). The Macedonian police are tear-gassing those bottled up in Greece who would make their way north into other parts of Europe. Finally, Syrians and Afghans have come to blows in Greece over the fact that the Syrians are being permitted to apply for asylum in Europe, while the Afghans are being told they are economic migrants who will be returned to their home country. What to do? And what does this say about the state of the refugee regime that was created after World War II?

The Refugee Convention stipulates that anyone who is unable or unwilling to return to their country of origin on account of a “well-founded fear” of persecution on the basis of their sociological characteristics or their political opinions is entitled to protection against forcible return (“non-refoulement”). This provision is one that many see violated by the recent agreement whereby European countries will re-settle a Syrian in Europe for every Syrian returned from Greece to Turkey. Some question whether Turkey will protect Syrians, as many have been forcibly returned from Turkey to Syria. Afghans, meanwhile, and other non-Syrian asylum-seekers, will be forced to stay in Turkey, without even the modest resettlement plan offered the Syrians.

The refugee regime has always depended on a crucial distinction to maintain its legitimacy.

One’s heart goes out to the Syrians, Iraqis, Afghans, Libyans, Eritreans, and others who have trekked many arduous miles, braved hardships and high seas, and endured the machinations of smugglers to get themselves and perhaps their loved ones to Europe in search of a better life.  One’s heart breaks to imagine that they might be sent back to their countries of origin after all that they have endured, and given what might lie ahead for them if they return home having spent their precious savings on a failed attempt to get to Europe. Yet the refugee regime has always depended on a crucial distinction to maintain its legitimacy: namely, the distinction between those fleeing persecution who cannot be helped in situ and those who are leaving unpromising and often miserable circumstances in search of a better life, but who are not in immediate fear for their lives.

The parlous situation of the world’s poor is often compounded by authoritarian governance, corruption, mal-distribution of the available resources, gender inequality, mistreatment of minorities (ethnic, sexual, and otherwise), and economic hardship that would make a First-Worlder blanch. These conditions cry out for amelioration; people deserve better.  But the intervention that broke up the stable logjam and, ultimately, unleashed much of the present migrant flow to Europe—the American-led effort to bring democracy to Iraq from outside—demonstrates all too clearly that there are limits to what outsiders can do about these conditions. In the meantime, local people leave if they have the energy and the wherewithal, and stay if they do not or feel that, for whatever reason, they cannot go. Those who leave may help those left behind with remittances if they are lucky enough to get to a place where they can earn enough to do so.

Such people are entirely admirable and, assuming they find their new homes according to the rules in place there, they should be supported in moving.  As the richer parts of the world experience greater or lesser degrees of population aging and shrinkage, such migrants bring a much-needed resource—workers—to places facing shortages even as they confront huge social welfare obligations to their aging citizens.

But these migrants are not refugees. The essence of the post-war refugee regime has been its special treatment of those literally running for their lives.  In order to make a claim on the acceptance of refugees by the recipient populations, one has to be able to say unequivocally that a particular individual or her family is at risk of serious human rights abuses in the place they came from.  Under these circumstances, the host society can only feel good about taking in these people; the question of whether or not they are “needed” or whether they might take jobs from native workers should be irrelevant. In part, this is because it is assumed that the numbers of refugees will be small. 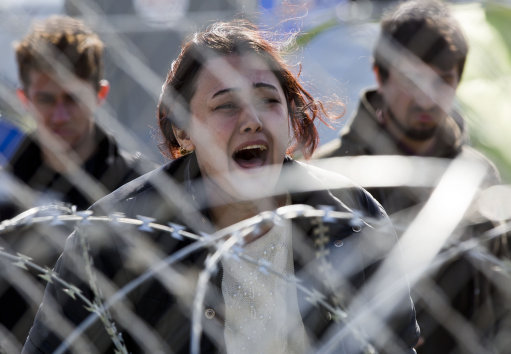 A woman is denied entry to Macedonia at the Greek border. Influxes in refugees and migrants have led to greater border restrictions in Balkan states.

In fact, of course, even those arriving at the borders of Europe who are actually fleeing persecution are not refugees, strictly speaking; they are in the first instance asylum-seekers whose claims to asylum must be lodged, received, processed, and adjudicated.  Because European societies have tended to be so unenthusiastic about immigration, much of the influx into Western Europe in recent years has been via the asylum route. This has undermined the refugee regime, blurring the line between immigration and asylum when that line should remain wide and bright.

In the face of all the hardship endured by those banging on the gates of Europe, this may sound harsh, but it is important to maintain the distinction if we want to continue to give special treatment to those fleeing for their lives. Those seeking to take advantage of the genuine dangers faced by Syrians facing a brutal and sadistic regime in order to meld into the “refugee” flow are undermining the system that was created after World War II and that has protected so many.

Then again, the Syrians themselves present a challenge to the refugee regime: most are fleeing war and violence rather than “persecution” per se. International refugee law needs to be updated to account more satisfactorily for circumstances such as theirs. Many of the Syrians are not fleeing persecution in the narrow sense, but the generalized violence being meted out by the Assad regime against those who would oppose it. It is all the more reasonable to countenance asylum for such persons since they are perhaps more likely than persons who have suffered individualized persecution to want to return home after the conflict is over; hence their need for asylum is more likely to be temporary. The individualized basis upon which asylum has historically been granted needs to be revised to accommodate those fleeing generalized violence, especially in a world in which more conflicts are civil wars than international ones.

John Torpey is Presidential Professor of Sociology and History and Director of the Ralph Bunche Institute for International Studies at the Graduate Center, City University of New York.