Four years after the ICC's intervention in Ivory Coast, opinions are still divided regarding its impact

For nearly two decades, Cote d'Ivoire was stuck in a cycle of unprecedented violence that culminated with the armed rebellion of September 19, 2002 and the post-election crisis, which lasted from November 2010 to May 2011.

Faced with a disastrous record of at least 3,000 dead and several thousands of people injured, missing and raped, the International Criminal Court (ICC) opened an investigation in 2011.Four years later, opinions on the ICC actions are still divided as the socio-political tensions are still vivid and deep-seated. In fact, Cote d'Ivoire, which became party to the Rome Statute of the International Criminal Court on February 15, 2013, is still characterized by the recurrence of violence, electoral issues, and poorly rendered justice.

Several expectations seem to have been disappointed in areas where the need for justice was seen as imperative. At times, the ICC appears to be a Court promoting the concept of victors' justice, or as a Court which is not sufficiently close to the people it is supposed to protect. All this occurs as the African Union is maintaining the ICC has anti-African sentiments. But in Cote d’Ivoire, for the first time in the history of the Court, a former African head of state is prosecuted just after his mandate ended.

Faced with the succession of violent events in Côte d'Ivoire, the need for remedial actions on behalf of the victims was great. Certainly, several mechanisms of transitional justice have been implemented to establish the truth and determine responsibility at the local level. These include the Commission de Dialogue, Vérité et Réconciliation (CDVR) (Dialogue, Truth, and Reconciliation Commission) and the Commission nationale d'enquête (CNE) (National Commission of Inquiry). The Ivorian courts have also been asked to play a role in investigating certain situations related to election violence. But the widespread suspicion and mistrust among Ivorians, as well as the lack of confidence in the institutions of the Republic have led to mixed results from these bodies, and also made the ICC look like a panacea that alone can provide light on facts attributable to individuals bearing major responsibilities.

In fact, both sides have committed crimes within the Court’s jurisdiction during the various stages of the conflict and the perpetrators of these alleged crimes might be found in both camps. However, the current reality paints a different picture. Today, there are only three people who are prosecuted by the Court: the former President Laurent Gbagbo, his wife Simone Gbagbo and the Youth leader of their political group, Charles Ble Goude. 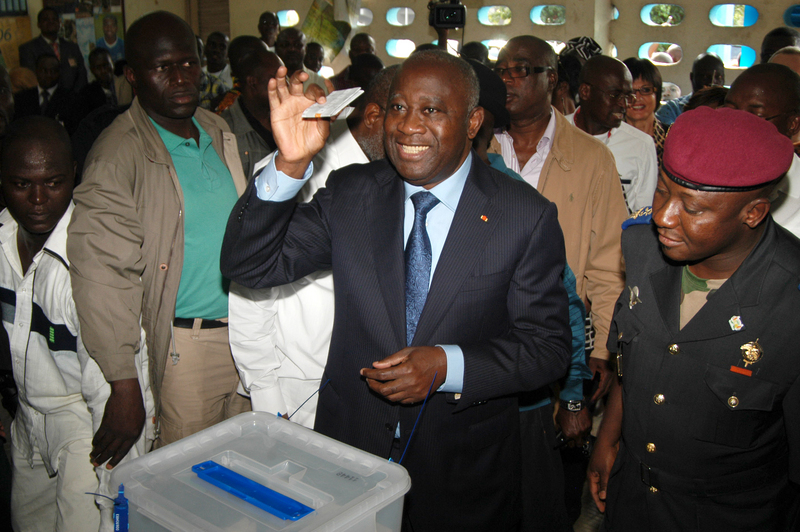 Ex-president of Côte d’Ivoire Laurent Gbagbo casts his ballot during the 2010 election.

To date, no person from the opposing camp has been, or is expected to be, prosecuted. The situation is even more serious at the level of national justice, since no proceedings were brought against the other camp, which is now in power. The ICC Prosecutor has announced investigations against the other camp, but did nothing, leaving open a sense of justice of the victors over the vanquished.

When justice is rendered in real time it sends a message in line with the fight against impunity.

In simple terms, even beyond the meaning of justice, when justice is rendered in real time it sends a message in line with the fight against impunity, reassures the parties to the proceedings and restores credibility and legitimacy to justice.

As long as the penal policy of the ICC does not take this aspect into account, justice as a sequential approach, as undertaken by the ICC in Côte d'Ivoire, will only have one face and will be uni-directional. This risks arousing resentment and widespread feelings of dissatisfaction once again, which may lead to the desire for vengeance.

For example, this might require the Prosecutor's Office to take into account the gravity of the crimes and the influence of the actors involved in the current policy chain when investigating such a case. This would effectively give a strong signal in line with the effective fight against impunity, notwithstanding the official positions and other immunities.

For sure, the ICC is the only jurisdiction that recognizes that the victims have a legal status. Actually, Article 85 of the Rules of Procedure and Evidence defines the concept of victim under international law. In addition, it is the only jurisdiction that involves the victims in its procedures, through its section on Victims' Participation and Reparations in the Registry of the Court (VPRS).

Therefore, the most difficult thing for the Court is to be heard and understood by the communities.

In Cote d'Ivoire, much has been done by the Court since 2012, particularly with the support of VPRS and the Awareness and Information Unit. But the impact still falls short of what is needed.

Other concerns are still acute.  Most of the crimes charged to Gbagbo camp concern only the facts that occurred in the capital Abidjan, to the exclusion of other regions of the country. One of the direct consequences is that thousands of victims in other regions of the country (mass murder, rape, war crimes, recruitment of children, perhaps even genocide) are not included in the Court's investigations.

One should not overlook the fact that the ICC proceedings are complex, lengthy and difficult to understand using a language and judicial rhetoric, which sometimes requires more than minimal skills from ordinary citizens.

In the end, the ICC, as an important bastion for justice and reconciliation, would benefit from reviewing its policy in Côte d'Ivoire by being more mindful of balance in the prosecution, thus giving a more definite impact to its actions.