This year will mark 25 years since the collapse of the Soviet Union. As the Soviet system was losing ground, Francis Fukuyama proclaimed the “end of history”, predicting “the universalization of Western liberal democracy as the final form of human government”. Undoubtedly, civil society is an integral and indispensable component in such a government.

Today, there is a clear divergence between countries that emerged in the post-Soviet space. One group, composed of Ukraine, Georgia, Moldova and Armenia, is struggling to build open systems of governance based on democratic principles. All of these countries, recognized as “partly free” by Freedom House, have vibrant civil society sectors with some of the strongest sustainability ratings in the region. Even though the state is not seriously impeding citizen action, corruption is still high, reforms are slow, and state capture prevents a competitive market economy. In addition, weak governance undermines civil society organizations’ (CSOs) efforts to have real structural impact on transition.

The other group—which includes countries such as Russia, Belarus, Azerbaijan and the Central Asian republics—is filled with semi-autocratic, “not free” systems, where elections are manipulated, the press is controlled by the state, and civil society is struggling to take root due to obstacles created by repressive states.

Since the collapse of the Soviet Union, the “partly free” countries have managed to build systems where independent citizen action exists and develops. During the Euromaidan protests in 2013, when reactionary forces in the Ukrainian Parliament voted for laws limiting freedom of expression and assembly and introduced a Russian-style “foreign agent law”, public outrage erupted. Ukrainian citizens managed to defend their autonomous civic space and the laws were annulled. In 2014 in Georgia, after active pressure from civil society and media organizations, the ownership of an independent Rustavi 2 TV was reinstated after a dubious court order took the station away from the oposition-affiliated owners. Last year in Moldova and Yerevan, citizens actively protested against high-level corruption and unfair electricity pricing. 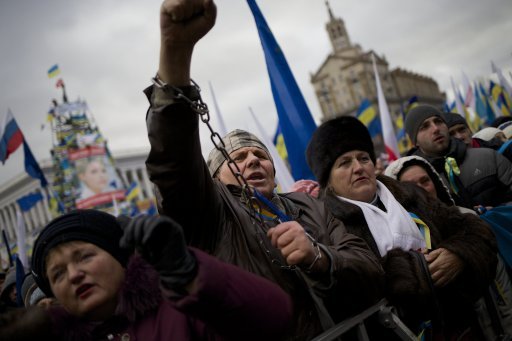 Ukrainians gather in Keiv during the Euromaidan protests of 2013.

Among the four countries of this group, Ukraine has one of the strongest CSO advocacy capacities, followed by Armenia, Moldova and Georgia. In the post-Euromaidan period, Ukrainian CSOs have engaged directly with various state agencies and pushed reforms via public advocacy, especially to tackle and prevent corruption. However, reforms are advancing slowly and public trust in their success is waning. There are many external obstacles in all four countries, but two specific challenges are impairing the sector’s effectiveness.

Influence on public policy comes from expertise and connection to policy-makers and Western donors, rather than collective pressure of citizens.

The first challenge is a gap between formal CSOs and citizens. Levels of participation in CSOs in the region are low and membership is in the single digits. Downward accountability to constituencies is practically non-existent. Even in Ukraine, an annual surveys of CSOs and charities shows that only around 50% prepare annual reports, much less report to the state, and public dissemination of annual reports is negligible. The sector could be defined as an “NGO-cracy”, where influence on public policy comes from expertise and connection to policy-makers and Western donors, rather than collective pressure of citizens united by common public interest. This approach means that citizens are mostly beneficiaries rather than drivers of change.

The second major challenge is an over-reliance on foreign donors for funding, especially for advocacy work. Accountability is mostly upwards—to donors and not to society. None of the countries in the last five years have substantially improved its financial sustainability score, remaining much lower compared to Baltic states. In addition, private sector or local charities in the region rarely support democracy-related work. They either find it too risky or prefer social projects with stronger public image effects.

If CSOs in this region would like to have a transformative power, they need to reinforce capacities that increase their competitive advantage. By reinforcing the “Three Ls”:  legitimacy, linkage and learning, CSOs could be better equipped to serve their constituency and be more effective in advancing social change.

First, legitimacy is a basis for a credible and powerful voice. It is achieved by strong connection to stakeholders, truly independent governance systems and adherence to the mission. If CSOs demand more democratic practices from the state, their own organizations must comply with the transparent governance norms in order to put pressure on political elites. When CSOs engage in advocacy and try to push political society, it is crucial that they represent not a position of several independent experts but an identifiable constituency. Legitimacy also requires adherence to a mission-driven agenda rather than a partisan position. There is often suspicion in the region that some CSOs could serve interest groups or political parties.

Second, linkages to other change-makers, domestic and international civil society networks could create a safety net and help accumulate “people power”. It is common practice for CSOs to form coalitions with other CSOs in the region, but the sector often exists as a parallel reality to state and business. Building connections to market forces and the private sector, which is now mostly seen as a potential source of funding, could reinforce pressure for reforms. Initiatives, such as anti-corruption efforts or transparency in public procurement, could resonate with the business community.

Finally, learning about successes and failures of the sector in promoting change could provide inspiration. There are not enough practical case studies in this region about CSO impact, yet the 25 years of post-Soviet transition provide rich material for reflection. It is important to understand where the leverage of the sector is coming from: expertise, media pressure, funding, high quality services, innovation, links with the West, feedback from beneficiaries or all of the above. The key question should be: what does it take to be a high-impact CSO?

Following such a strategy could open new avenues for the sector and help advance transitions. This “partly free” space should not be taken for granted, especially as it faces challenges from domestic interest groups in addition to a resurging Russia on its borders. Both of these trends clearly do not agree with Fukuyama’s “end of history” and have the potential to obstruct democratic development, including the flourishing of a much-needed independent civil society.

Orysia Lutsevych is the manager of the Ukraine Forum in London-based think tank Chatham House. She focuses on social change and the role of civil society in democratic transition in the post-Soviet region.