Digging deeper: the impact of coal on human rights

With governments making commitments at the Paris Conference of Parties (COP21), global leaders must understand the impact and future of coal as a matter of human rights.

In much of the Western world, coal seems like an anachronism, a fuel from a dirtier time, when workers’ black lungs and soot-coated growing cities were accepted as the cost of progress. Indeed, with coal production declining or being phased out in much of North America and Europe, and even reaching a peak in China, the future of coal is now anchored in the global South.

Where companies and governments have sought to address coal’s impacts, the measures to compensate affected workers and communities are often piecemeal, top-down, and too late. These measures very rarely start with long-term and holistic planning or human rights impact assessments, which would include asking workers how they are affected, and consulting with communities on what would compensate them adequately for their losses. If coal has benefits for overall economic development as great as its proponents claim, it should be straightforward to transfer some of the net benefits to those most harmed by the development of coal mining and energy. However, because these victims often lack any power or influence, they rarely receive anything approaching adequate remedies.

We chose four specific country case studies—Colombia, India, South Africa and Egypt—because of their geographical representation, and the diversity of their profiles in terms of coal production and consumption. Colombia, India and South Africa are three of the top coal producers in the world, but while Colombia exports almost all its coal, India and South Africa use most of the coal that they produce internally. Egypt has negligible coal reserves but has recently opened its doors to coal use in its industries.

India, the third-largest coal producer in the world, is relying on it to fuel its massive industrial expansion. As in Colombia, tribal peoples, concentrated in the coal belt states of Odisha, Chhattisgarh and Jharkhand, are frequently displaced—with their consent often fabricated, coerced, or simply never sought. Even where their homes and lands are not outright taken, indigenous and other rural peoples often face devastating pollution of their land and the rivers they rely on for drinking water, agriculture, and subsistence fishing. In addition to large mines operated by major companies, thousands of small-scale mines dot Jharkhand, with 100,000 children reportedly having worked in dangerous “rat hole” mines. 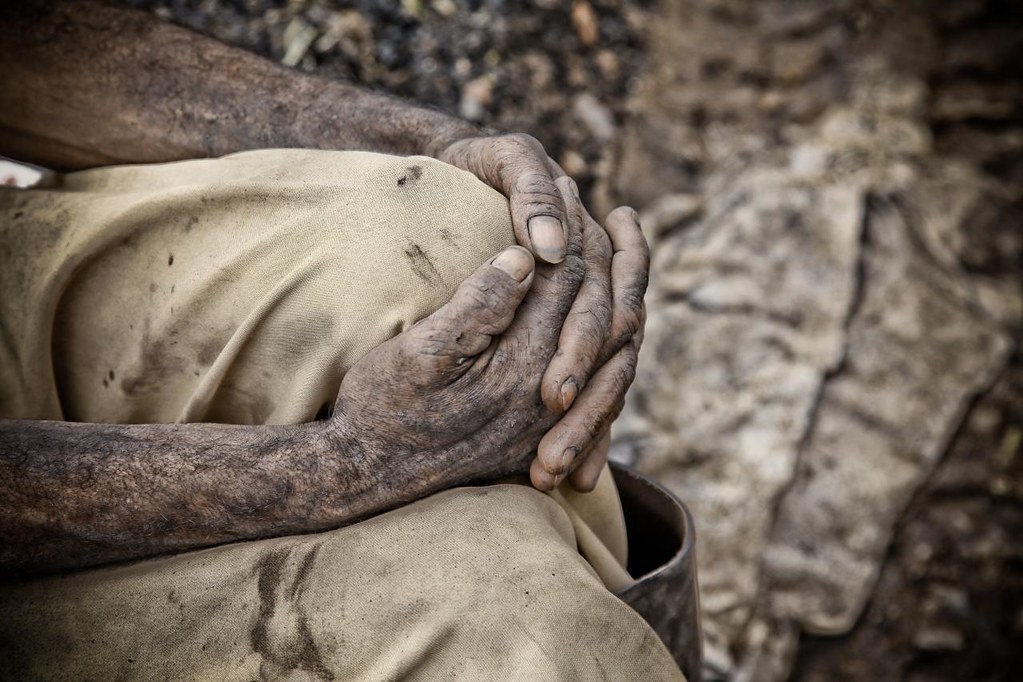 The discolored hands of a Colombian coal miner.

South Africa faces both shortfalls to meet the domestic energy demand of its huge mining sector, and increasing demand for coal-fired power from its African neighbours. Its own energy sector concentrates production in one region of Mpumalanga province, where studies have shown that coal is responsible for thousands of deaths from respiratory and cardiovascular disease, as well as elevated incidence of cancer, foetal development problems, and other illnesses. The communities who live nearby consist mostly of black South Africans, who are the most economically marginalized group in the country. They frequently live without electricity, even though it is produced next to them. Traditional societal structures in many of the affected communities have also excluded women in important decision-making, with coal companies reinforcing such structures through payments to traditional male leaders. Coal mining also drains scarce water resources from neighbouring communities, and leaves behind toxic run-off known as “acid mine drainage” that can poison groundwater for decades or centuries after a mine closes.

In Egypt, the government has taken steps to reverse long-standing bans on coal use and imports, ousting a Minister of Environment who opposed increased reliance on coal over concerns about its impacts on health and livelihoods. Since May 2013, the government has refused to provide figures about current and planned increases in coal imports and use, or whether or how it is monitoring or enforcing the environmental obligations of cement and other companies that were granted the permission to use coal. It is making decisions to open Egypt to coal with essentially no civil society participation, amid a generalized increase in suppression of freedom of expression and protest.

The countries increasing coal production and consumption do so for the sake of development—of their domestic industries and their economy, of energy to reach more of their population more consistently and without blackouts. But in overall terms, the worldwide externalized costs of coal in 2007 were estimated at USD 450 billion, while the economic value of coal that year was only USD 210 billion. In addition, in many cases this development comes at the expense of the human rights of the people most vulnerable to the detrimental effects of coal. Human rights violations caused by the coal industry, and other actors that support it—such as security personnel and government officials—are rarely prosecuted, nor are victims able to obtain civil remedies in most cases.

A just transition from coal is crucial for human rights—a “green” economy alone is not sufficient.

Through our case study research on the impact of the coal industry in the global South, we came to six key findings. First, coal is not cheap, despite common misconceptions. Second, coal actually aggravates local poverty and may have very little positive net economic effect nationally. Third, the coal industry in the global South is being fuelled by both the South and the North—no one is exempt from responsibility. Fourth, human rights violations around the coal industry thrive in contexts of weak and/or repressive governance. Fifth, corporate social responsibility is simply not enough to guarantee true accountability. And finally, a just transition from coal is crucial for human rights—a “green” economy alone is not sufficient.

In Colombia, already the world’s fifth-largest exporter of coal, the government estimates that coal production will increase by 50% by 2019. Coal mining has displaced indigenous peoples, farmers, and Afro-descendant communities, sometimes forcibly depriving them of land that is essential to both their livelihoods and their cultural identity, as they are pushed onto ever-smaller parcels. It has also exacerbated the already fragile situation of water scarcity in the largest arid region of Colombia, where many of these communities are located. Often, the costs to these communities are not even calculated into the coal debate. As we ask in our report, how does one put a dollar value on the number of families displaced by land grabs for coal mines, the deaths caused by paramilitaries which were allegedly hired by a coal company in Colombia, or the deprivation of traditional livelihoods of indigenous communities?

The violations of human rights in the coal industry are specific to each country, yet as a whole they seem to be common across the global South. Thus, the coal industry, governments making commitments at the Paris Conference of Parties, and other stakeholders must understand the real questions of coal’s impacts, and its future, as a matter of rights and remedies. These are not issues that can be addressed with only numerical targets, technical fixes and voluntary charity by companies.

The full version of this report is available at www.coalinthesouth.org.

Gregory Tzeutschler Regaignon is the research director at the Business & Human Rights Resource Centre. He also oversees the Centre’s Corporate Legal Accountability Project and its work on the UN Guiding Principles and UN Working Group, and manages its Africa team.