What exactly are the “interests of justice” in the context of the ICC? And should the ICC prosecutor take conflict resolution into account, or do the interests of peace really lie outside of the ICC’s mandate?

An important unresolved question regarding the ICC is its proper role in the context of ongoing armed conflict. Should the prosecutor take into account the fact of war, and perhaps an active peace process that aims to stop the war, when she sets her strategy? Should this context affect her many decisions about how and when to act, and whom she will target, or whether even to open investigations in any given context? Should she be driven only by the evidence of crimes, or should she also assess the likely impact of her actions?

The Rome Statute offers the possibility of flexibility, and a broader understanding of the prosecutor’s role in delicate national contexts, with its inclusion of three small words that are imbedded in the depths of the Statute: it directs the prosecutor to assess whether her actions will be in the “interests of justice” before opening an investigation or prosecution.

But the “interests of justice” is left largely undefined. Some diplomats who participated in the Rome negotiations understood this to be intentional: this wording would allow room for any number of unforeseeable factors to be considered, and avoid creating an inflexible institution that was blind to context. Surprisingly, they did not foresee that the ICC would work primarily in contexts of ongoing conflict. As this reality has taken shape, many local activists, including strong supporters of the Court, have argued that the prosecutor should consider contextual factors such as peace negotiations before deciding to act.

The prosecutor’s policy statement tried to put to rest any questions of peace, war and the impact of international prosecutions in sensitive contexts by referring such questions to the UN Security Council. It said that peace and justice are distinct goals, and the interests of peace lie outside the prosecutor’s mandate. The current prosecutor, Fatou Bensouda, has reaffirmed this policy.

It is true, of course, that the Rome Statute grants the Security Council the power to review the Court’s impact on international peace and security, and it can defer Court action for one year at a time based on such concerns. But there is nothing in the Statute that prevents or discourages the prosecutor from also considering such issues.

While the simplicity of the prosecutor’s policy is attractive, and seemingly avoids a dangerous politicization of the Court, there is a profound discomfort among many national-level experts about such a narrow understanding of justice. The prosecution’s apparent resistance to evaluating its own impact in fraught national contexts is especially unsettling. 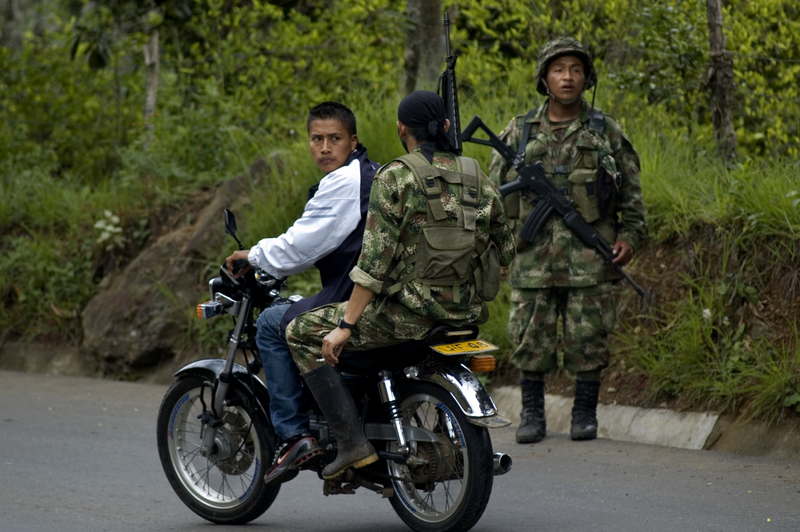 FARC guerrillas in the Nasa region of Colombia. Should the ICC prosecutor consider the impact of her investigations on the negotiations to find a peaceful solution to the long-running conflict?

At the heart of the matter there are two fundamental problems, or contradictions. First, the prosecutor’s office has repeatedly said that a primary goal is “prevention”: it aims above all to deter future crimes. It believes that prevention follows directly from prosecution of past crimes. Leaving aside the contested (albeit very important) question of whether prosecution leads to deterrence, there is a more obvious causal relationship that is not contested: the fastest way to reduce serious crimes is to stop violent conflict. War opens space for horrific violations. Logically, the prosecutor’s priority of preventing further crimes would seemingly lead to a respect for—or at least a consideration of—credible peace efforts. The ICC should not want to be seen as detrimental to efforts that could reign in violence.

Second, there are few rights advocates, when considering their own context, who would define “justice” as limited to the prosecution of a handful of the most responsible. For real justice, reform of the national judiciary may be necessary, building a criminal justice system for all. Justice should include reparations for victims—most especially when the perpetrator was the state. Those implicated in serious crimes should be removed from the security forces. And for many victims, the first demand is to learn the truth, and to have that truth officially recognized. If these components are included in peace talks—and if, importantly, the plans are credible and likely to be implemented—then the “interests of justice” would be served by a successful conclusion of the peace agreement and robust implementation.

A different understanding of the interests of justice would also suggest a different understanding of the impact of the prosecutor’s actions on local dynamics. Her actions and her statements are noticed, and they affect the behavior of local and national actors, from warlords to presidents. This effect might be positive (deterring crimes) or negative (hiding evidence of continued crimes). Her actions might encourage national justice, or impede peace or demobilization. How and when she acts can be as important as what her actions and decisions are. Will an arrest warrant be public, or sealed? Open investigations now or wait another year? Criticize national legislation or court decisions, or remain silent while national dynamics play out? Prosecutorial strategy is a process of constant evaluation. The strategy as a whole should be shaped by an overarching interest in justice.

How could the prosecutor incorporate a broader notion of the “interests of justice”? This is difficult on two counts: acknowledging the importance of contextual factors, such as an interest in not disturbing a peace process, could open the prosecutor to explicit political pressures or even blackmail. It is not difficult to imagine such a scenario. Second, it may be too much to expect that the prosecutor’s staff in The Hague could track the enormously complex and quickly changing dynamics in-country. These are legitimate concerns; the risks are real. But there may be a greater risk in not being attentive to the range of justice concerns that extend beyond the specific prosecutorial interests at hand.

What may be missing is a process by which the prosecutor could more comfortably evaluate the likely impact and timing of her actions in each different national context.

What may be missing is a process by which the prosecutor could more comfortably evaluate the likely impact and timing of her actions in each different national context. For example, independent country-specific advisors on the “interests of justice” could offer assessments, while leaving all decisions entirely to the prosecutor. Such advisors could evaluate a host of factors: victims’ interests; the credibility of national (criminal and non-criminal) justice initiatives; whether ICC actions might rattle an ongoing or developing peace process. Admittedly this may overlap with “complementarity” assessments, but the interests of justice might allow an analysis beyond strictly prosecutorial criteria.

The frustration from national advocates in some contexts—such as Uganda and Columbia—is palpable. They support the ICC. They want justice. But those who work closely with victims also prioritize something else: stopping the ravages of war that will create more victims tomorrow and the day after. The last thing anyone wants is the well-meaning efforts of international justice to have the effect of increasing the suffering, or preventing the resolution of a brutal war. No one should understand this to be in the interests of justice.

Hayner is an independent writer in New York City.  She is the author of Unspeakable Truths – Transitional Justice and the Challenge of Truth Commissions and is now completing a book on peace and justice, including an analysis of the impact of the ICC in conflict contexts.