A newly appointed UN expert sets out a plan to protect the rights of persons with albinism.

“Albinos are being hunted in Africa!” Headlines like these are not uncommon these days. They sound sensationalist but in fact reflect a grim reality: that in some countries, people with albinism are being attacked—usually with machetes and knives—for the purpose of obtaining their body parts.  These attacks are based on a witchcraft-led belief that the body parts of people with albinism can lead to wealth and good luck when used in potions.  This in turn has led to a black market trade in body parts and even, in some instances, to robbing the gravesites of persons with albinism.  Body parts are reportedly sold for hundreds or thousands of US dollars. Surely, if poverty is moving people to attack their fellows who look different, then the prices of these body parts implicates the involvement of a relatively wealthy elite.

Albinism is a genetic condition that results in a significant deficiency or absence of melanin in any or all of the skin, hair and eyes. There are various kinds of albinism but the most common type—and the one that has led to those with albinism being attacked—is when all of the skin, hair and eyes are affected so that the person stands out in her family and community.  Both mother and father must carry the gene for albinism for it to be passed on to a child. It can be inherited even when both parents do not have the condition. In such an instance, there is 25 percent chance at each pregnancy that the child will have albinism. Albinism generally causes vision impairment to varying degrees in each individual. It also causes strong susceptibility to skin cancer where precautions are inadequate or inaccessible. The frequency of albinism varies by region with North America and Europe having roughly 1 in 17,000 affected. In several parts of Sub-Saharan Africa, the frequency can be as high as 1 in 1,500. This is also the region where all physical attacks have been reported to date with civil society reporting over 400 attacks across 25 countries in the region, counting from 2007. These are only reported cases; the actual number of attacks is likely higher.

In response to the attacks, the United Nations Human Rights Council passed several resolutions from 2013 onwards, condemning the attacks and highlighting the discrimination that has led to the attacks. Further, in 2013 the African Commission on Human and Peoples’ Rights adopted an important resolution in 2013 (resolution 263) listing steps that implicated states should take to protect persons with albinism. Most recently, in March 2015, the UN human rights council established the mandate of independent expert on enjoyment of human rights by persons with albinism; a post which I assumed in August 2015. 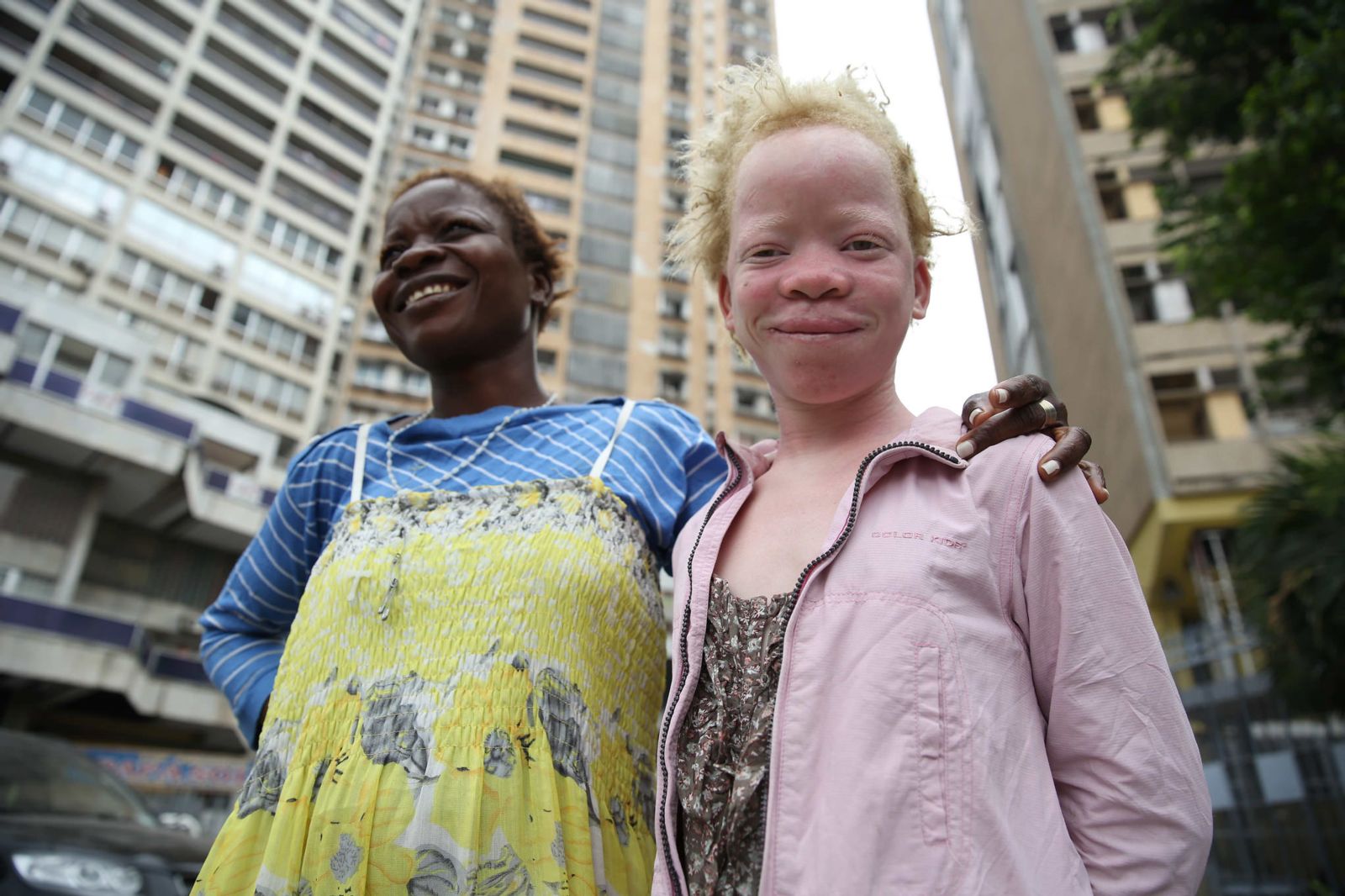 An albino girl and her mother are photographed in Kinshasa, RD Congo. Despite the frequency of Albinism in Sub-Saharan Africa, civil society reports over 400 documented attacks across 25 countries in the region since 2007.

My vision and priorities for this mandate are likely to evolve as I consult with more people and new information comes to the fore. While I hope to address obstacles to human rights by persons with albinism worldwide, my priority for the next 3 years will be in the Sub-Saharan Africa region with an emphasis on ending attacks and corollary issues.

I will work with affected states to develop specific measures that can end these attacks and associated issues.

The first priority must be to end the attacks. This is an emergency. I will work with affected states to develop specific measures that can end these attacks and associated issues such as the trade in body parts and the re-integration into home communities of those who have been displaced by attacks. My first anticipated meeting for developing these specific measures is in 2016.

Second, there is a need to address the health care needs faced by people with albinism. Skin cancer kills the majority of these people before the age of 40 in some parts of Sub-Saharan Africa.  This is due to a lack of information on skin care and protection, as well as a lack of access to sun protection lotions and sun protective clothing. It is also because those with albinism are forced to work outdoors after failing to get an education that would qualify them for employment that is more likely done indoors. The education dropout rate for persons with albinism in some countries is linked to their vision impairment and the absence of any reasonable steps taken to accommodate it. Dropout is also exacerbated by stigma and discrimination. I will work with states and key stakeholders from civil society to hold health forums across the continent to identify sustainable measures that can be put in place to address these issues.

Third, I hope to identify best practises in supporting and protecting persons with albinism, and collect these in a model policy. Policies point to immediate measures states can take and can be effective in bringing about immediate change. This model policy will be a living document that I hope to update as information comes in from reports and research I undertake or which is sent to me. It is hoped that states will eventually adapt the policy to supplement other laws that may cover persons with albinism such as laws governing persons with disabilities, and laws around the highest attainable standard of health.  The policy will address all day-to-day issues pertaining to albinism beyond the issue of attacks and as such will involve multi-sectorial aspects of government and non-governmental bodies.

The research I will pursue as Independent Expert will be ongoing to improve the quality and quantity of the information available on the human rights of persons with albinism.  It will include work to identify legal frameworks that might provide a sustainable and effective system of protection for persons with albinism. Research will also include work on root causes of attacks beginning first with the issue of witchcraft. Finally, my work will include advocacy, and raising the visibility of the issue, especially through the use of the media including social media.

I see the creation of the mandate of Independent Expert on albinism as a great expression of collective will by the Human Rights Council: to end the attacks against persons with albinism and to work at finding root causes. The goal must be to establish measures to prevent attacks on these people. To this end and for the realisation of all goals of this mandate, I will engage with diverse stakeholders in all regions particularly and foremost in the areas affected by attacks on persons with albinism. In addition, I wish to reiterate my desire for constructive engagement with affected states specifically to delve into root causes and establish preventative measures. Lastly, but not least, I wish to highlight the central and complementary role of civil society, particularly non-governmental organizations and academia in providing me with information and being a source of fruitful engagement to work for the enjoyment of human rights by persons with albinism.

Ikponwosa (“IK”) Ero is the United Nation’s first Independent Expert on the enjoyment of human rights by persons with albinism.