Reading between the lines of the COP26 decisions, you can find small wins that are the result of the tireless efforts and dedication of the climate justice movement. 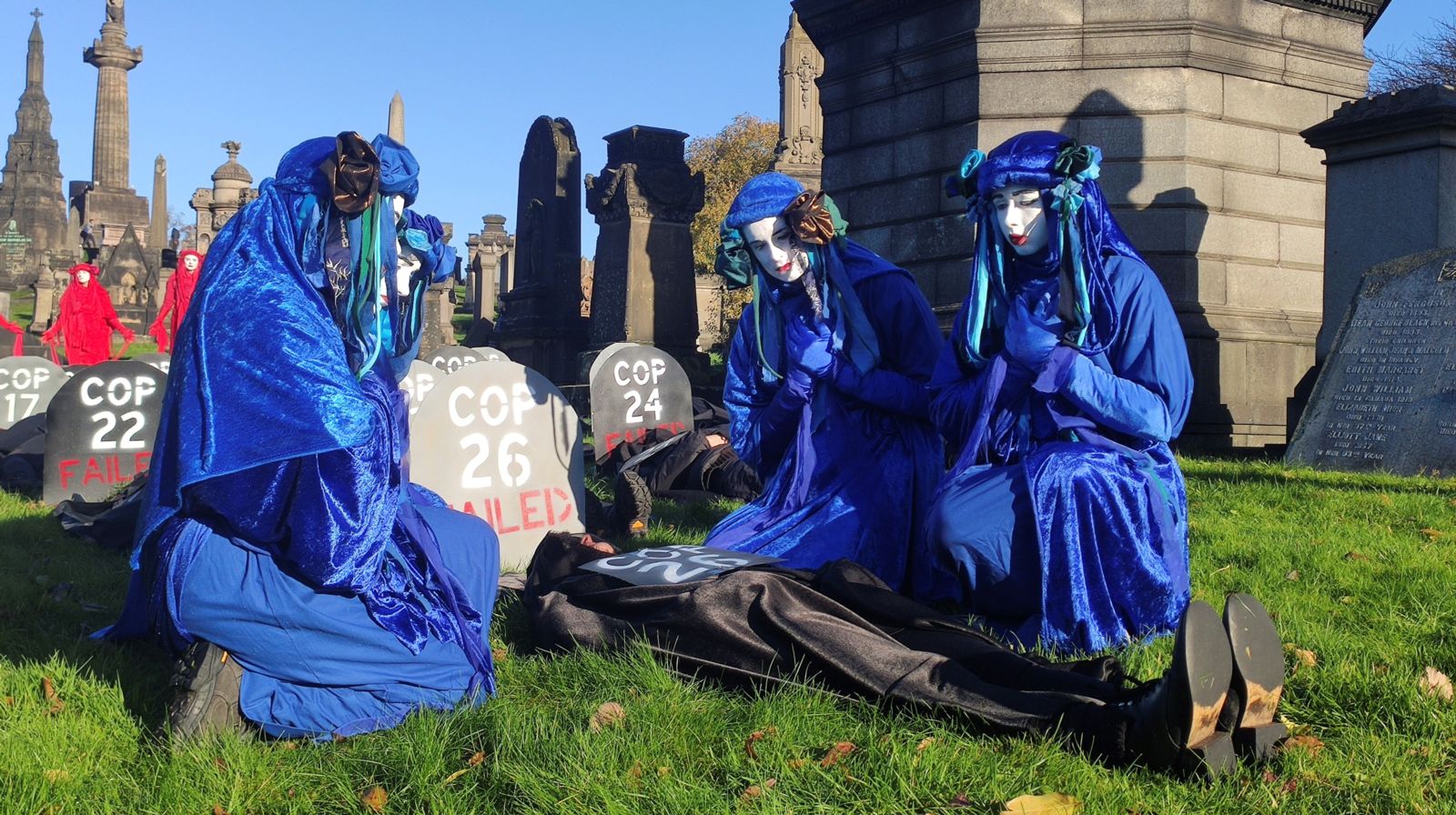 "Artivists" of the NGO Extinction Rebellion officiated a symbolic funeral for the COP26 in the cemetery of the city of Glasgow. The COP26 is dead in their opinion due to the lack of ambition of the world leaders. EFE/ Guillermo Garrido

States at COP26 disappointed us once again. After two weeks of talks and protests, with the eyes of the world on them,, leaders only managed to achieve the minimum common denominator between their different interests. It was an outcome dictated not by peoples’ needs and rights but by electoral considerations and the economic interests of powerful corporations.

A compromise solution is not what we need in times of emergency. A “Glasgow Climate Pact” that only “resolves to pursue efforts” to limit the temperature increase to 1.5 °C is not going to save people from hunger, water shortages, illness, and displacement. A COP26 decision that only opens up another lengthy dialogue about financial support to address loss and damage is not going to bring support and remedy to children in Jacobabad, Pakistan, who are dropping out of school because of scorching temperatures during recurrent heat waves, or to Tuvaluan islanders whose country is sinking under their feet.

The chorus of condemnation that followed was therefore inevitable. Greta Thunberg labelled the COP26 outcome “blah, blah, blah.” Tasneem Essop, executive director of Climate Action Network, called it “a clear betrayal of the millions of people suffering from the climate crisis.” Thomas Hoope, an Indigenous leader from the Hoopa tribe in the USA, stated that the agreement “will entrench sacrificing Indigenous people … [but] failed to include real solutions to meet the climate chaos that many of our frontline Indigenous communities are facing.” Amnesty International’s Secretary General, Agnès Callimard, defined the COP26 outcome as a “catastrophic failure” that shows leaders have forgotten who they should serve and their responsibility to protect humanity at large.

As a civil society, we must remain extremely critical of the overall result, as we cannot afford to be complacent when the house is on fire and all states did at COP26 was to order more fire extinguishers that might arrive too late. However, we must avoid at all costs falling into the traps of despair and cynicism. As most civil society and Indigenous peoples’ leaders have pointed out, it is the time to redouble our efforts, not give up.

Despite the lack of breakthrough commitments, there was incremental progress at this COP and those who helped achieve it deserve to be celebrated. Reading between the lines of the COP26 decisions, you can find small wins that are the result of the tireless efforts, the passion, and dedication of the climate justice movement.

The call to “phase down unabated coal” and “phase out inefficient fossil fuels subsidies” is a drop in the ocean, as all fossil fuels, not just coal, and all fossil fuels subsidies, not just “inefficient” ones, need to be confined to history to avoid societal collapse and human extinction. But even those tepid sentences were, until very recently, considered unsayable in international climate change negotiations and didn’t make it into the 2015 Paris agreement, let alone any previous COP decision.

That this has finally happened is thanks to all those campaigners and environmental human rights defenders around the world who have been trying for years to stop new coal, oil, or gas projects; campaigned for divestment from fossil fuels and the scrapping of fossil fuel subsidies; and brought fossil fuel corporations to court and managed to erode the social licence of Carbon Majors, while building the vision of a just transition to renewable energy. The fight does not end with a mild reference in the COP26 decision, but this is an important step on which to build  future negotiations and national campaigns.

But even those tepid sentences were, until very recently, considered unsayable in international climate change negotiations and didn’t make it into the 2015 Paris agreement, let alone any previous COP decision.

After years of contentious negotiations, states at COP26 adopted rules for governing “international carbon markets.” This is a very worrying development as it allows for more offsetting projects by richer states and companies in Global South countries. These are often carried out at the expense of Indigenous peoples and local communities who are dispossessed and forcibly evicted to make space for “clean energy” projects, many of which, like hydroelectric dams and bioenergy plantations, do very little in terms of reducing global emissions. Against this negative background, Indigenous peoples and human rights activists have managed to plant some seeds.

COP26 decisions on carbon markets do contain some references to the importance of considering human rights obligations when implementing these projects. These references lack the details to provide full and concrete guarantees that offsetting projects would not violate the rights of those potentially affected. But their very existence is testament to the subtle and diligent advocacy work of Indigenous peoples and human rights advocates over the years. Again, human rights defenders cannot rest on what (little) was accomplished at COP26, but at least they now have a basis on which to build.

Richer states at COP26 slapped  the faces of those who are already suffering from loss and damage caused by the climate crisis. They once again refused to reach into their pockets to compensate people who have lost everything due to climate-related disasters. But the fact that smaller islands and the poorest countries managed to put “loss and damage” so high on the agenda can be largely attributed to the long-standing climate justice movement.

Campaigners from the most affected countries have never stopped trying to claim justice, remedy, and reparations. They have managed to bring with them larger international NGOs, including those most traditionally focused on emission reductions. It is also thanks to this large cross-cutting movement that governments of poorer countries are putting their feet down in climate negotiations every year with more strength. The struggle is still long, but the movement is becoming so strong and so loud that it is becoming impossible to ignore its demands.

As we wonder where to go after COP26, let’s remember these small victories. This doesn’t mean becoming complacent as we still need to move mountains to fight powerful corporate interests and motivate states to act for the people. It just means by celebrating the strength and the achievements of the climate justice movement, we will  gather even more energy to escalate the battle to hold those in power to account. Greta is right when she says that the real work continues outside COP.