A look at the key geopolitical, ecological, technological and socio-economic challenges to human rights.
By: César Rodríguez-Garavito 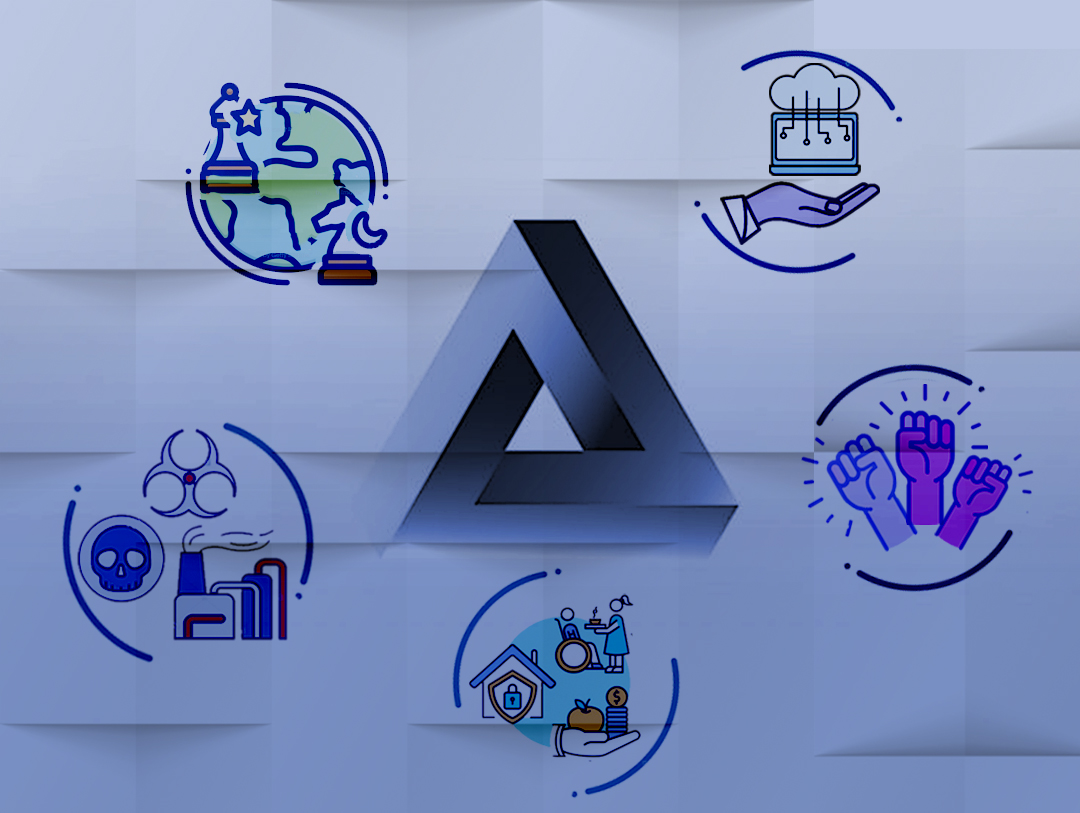 In envisioning possible futures for human rights, the best place to start is the present. Two tools of foresight methodologies—detecting signals of change and drivers of change—offer particularly useful starting points. Signals of change are small innovations that have the potential to disrupt a field of practice if they grow in-scale and become widely disseminated. Think, for instance, of the potentially transformative impact that open source human rights investigations will have if they become widespread. Drivers of change are larger, structural transformations in society, technology, the economy, the environment, and politics that underlie longer-term shifts in a field. This post focuses on identifying drivers of change, particularly structural trends that raise existential challenges to human rights. I will come back to signals of change in subsequent posts.

Five drivers of change pose particularly serious challenges to human rights.  The first one is the geopolitical challenge. The Euro-American world order inherited from the second post-war, which provided the geopolitical backbone for the globalization of human rights in the second half of the twentieth century, is no more. The initial death knell was sounded by the rise of the BRICS countries in the 2000s, which heralded a new era of multi-polarity. As it turns out, all that remains of that acronym, in terms of realistic aspirations for global geopolitical power, is the “C” for China. In the meantime, the Euro-American order imploded from within, after Brexit, Trump, and the rise of right-wing populism in Europe—with help from Russia, now relegated to the role of global disruptor. The result is a more fragmented and unpredictable international legal and political order, with no obvious reliable government champions of human rights causes.

Signals of change are small innovations that have the potential to disrupt a field of practice if they grow in-scale and become widely disseminated.

Second, the breakneck advance of information processing and tele-communications in the digital era presents a formidable technological challenge for human rights. While the story of the 2010s was about how the internet and social networks empowered and connected activists and social justice organizations across borders, the story of the dawn of the 2020s is about how those tools and other technologies such as artificial intelligence are being used to collect unprecedented amounts of personal data, manipulate human behaviour, disrupt elections, and concentrate power in the hands of digital corporations and surveillance states. As Shoshana Zuboff has shown, the technologies and institutions of the new era of surveillance capitalism undermine the conditions for the exercise of basic rights, from privacy to autonomy to political participation. Biotechnology, which enables wealthy individuals to purchase enhanced cognitive and physical capacities, raises an equally formidable challenge, as it threatens to crystallize and deepen the inequalities that are already tearing apart national polities and undermining human rights around the world.

Third, the political challenge that populist authoritarianism presents to democracy and human rights is here to stay. Anchored as it is in long-term structural transformations, its ascendancy is not a glitch in the trajectory of global liberalism.  As they polarize societies through a categorical moral division of the polity between “us vs. them,” between the “real people” and the rest, authoritarian populists strike at the core belief of human rights in the equal dignity of all. In doing so, they rely on the digital technologies (such as social media and messaging services) that were created to connect across group boundaries, and are now used to entrench tribal identities, be they ideological, ethnic, religious, nationalist, or otherwise.

Fourth, the climate and environmental crisis disrupts basic conditions of life on earth and thus those of human rights. This ecological challenge entered the mainstream in 2018-2019, as the reports of the UN expert panels on climate and biodiversity overlapped with the cascade of extreme weather events that scientists had been warning about for decades. The advent of the Anthropocene, the geological era marked by the dominance (and potential annihilation) of the planet by the human species, was heralded by those early signs of the uninhabitable planet that future generations will inherit if drastic decarbonization measures are not urgently adopted to change the trajectory that is leading the planet to 1.5°C to 2°C degrees of warming by mid-century and 3°C to 4°C degrees by the end of the century. The Anthropocene opens the gates to violations of human rights at an unprecedented scale, such as tens of millions of climate-induced deaths and waves of forced displacement that far surpass those caused by wars, and economic suffering much deeper and generalized than those associated with the Great Depression and financial crises. In all of these respects, the coronavirus pandemic may be seen as a rehearsal for the human rights impacts that worsening global warming will unleash in the coming years and decades if urgent and drastic action against it is not taken.

Finally, increasing inequality poses a key socio-economic challenge. Inequality is indeed “the antithesis of human rights,” as shown by rising income inequality in nearly all countries, the fact that less than 1% of the global population owns nearly half the world’s wealth and the reality (confirmed once more by the uneven effects of pandemic and powerfully exposed by the racial justice protests in 2020) that economic disadvantage is closely interrelated with other systems of oppression, from racism to patriarchy to discriminatory nationalism.

As Yuval Harari has noted, “while human rights movements have developed a very impressive arsenal of arguments and defence against religious biases and human tyrants, this arsenal hardly protects us against consumerist excesses and technological utopias.” I would add that—unless updated and revamped—it hardly protects us against democratically elected autocrats, digital dystopias, or planetary risks such as global warming and pandemics.