Barbuda is a microcosm of larger trends and issues from climate-induced displacement and disaster capitalism, to the greenwashing of policies that undermine climate resilience.

“The future is already here. It’s just not evenly distributed yet,” the sci-fi writer William Gibson has famously said. For a peek into the future of human rights in a warming planet, there are few better places than the small Caribbean island of Barbuda. Barbuda is a microcosm of larger trends and issues – from climate-induced displacement and disaster capitalism, to greenwashing of policies that undermine climate resilience. If this future is to be avoided in Barbuda and elsewhere, the world must pay close attention to current developments in the island whose stunning calm and beauty made it Princess Diana’s favorite vacation spot and inspired Robert de Niro to call his planned luxury tourism project there, “Paradise Found.”

The first thing to note is the government’s double standard. In early December, 2020, the central government of Antigua and Barbuda, located on the island of Antigua, virtually convened a meeting of the Latin American and Caribbean states that had signed the landmark Escazú Agreement in 2018. This binding treaty guarantees public participation in significant decisions about the environment, rights to information and access to justice in environmental matters. It also offers important protections for environmental activists, who face acute risks across the continent.

The government self-identifies as “one of the front runners within the region with a progressive climate agenda,” recently receiving $39.4 million from the Green Climate Fund. When the Category-5 Hurricane Irma decimated Barbuda in 2017, a smaller island located 40 miles north of Antigua, Prime Minister Gaston Browne said “Three years from now, we’ll be having a different conversation; we’ll be looking at a Barbuda that’s climate-resilient, that’s totally green.”

Three years later, the conversation is very different. While championing the Escazú Agreement, PM Browne is simultaneously rolling out plans to transform Barbuda’s 62 square miles into a haven for luxury hotels and sprawling estates for billionaires, all the while dismissing strong opposition from locals and violating basic human rights protected by the Escazú Agreement and international law -- including Barbudans’ right to have a say in decisions affecting their lives and lands.

Since the time of slavery under British colonial rule, Barbudans and Antiguans have lived very differently. While Antigua’s economy is fueled by large-scale tourism, like most of the Caribbean, all land in Barbuda is “owned in common by the people of Barbuda,” and “no land in Barbuda [can] be sold” – a centuries old system formally recognized in these words of the Barbuda Land Act of 2007. Barbudan culture and identity is intimately tied to the land. Barbudans steward their dry, limestone island in balance with its delicate ecology: harvesting lobster, hunting, implementing slash and burn farming techniques and allowing select eco-tourism projects through its local governance mechanism, the Barbuda Council.

Today, Barbuda’s past and future identity hang in the balance.

After Hurricane Irma hit in September 2017, the central government evacuated all 1,800 Barbuans to Antigua. It was necessary, they said, because a second storm was imminent. When no storm arrived, armed military personnel continued to seek out and remove those who wished to remain and rebuild. Barbudans remained on Antigua for several months, while their possessions rotted from the salt and sun.

Within days of the evacuation, developers and construction crews arrived and began round-the-clock work on an international airport a third of the size of New York’s LaGuardia, without any environmental assessment. “That’s when we realized that the government wasn’t interested in having Barbudans back,” told us John Mussington, an activist and Principal of Barbuda’s secondary school, “they wanted to redevelop the island as a private real estate venture.”

This is the second feature of Barbuda’s story that encapsulates future challenges for human rights in the climate crisis. As Naomi Klein has written, this is disaster capitalism for the twenty-first century: the use of a crisis and military force to enact economic reforms that would not have been possible under normal circumstances.

Within months of the hurricane, the government summarily repealed the communal land protections of the 2007 Barbuda Land Act. The scope of the development since then is striking, especially given pending legal challenges to this repeal and to several individual projects. Much of the development is inside Codrington Lagoon National Park, a wetland protected under the Ramsar Convention. As the below map shows, the projects cover most of the island’s Caribbean side. 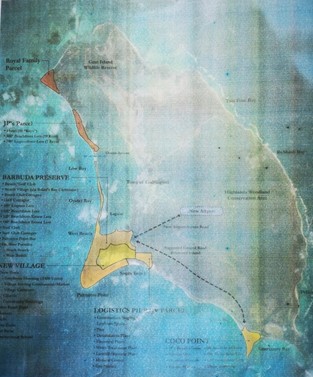 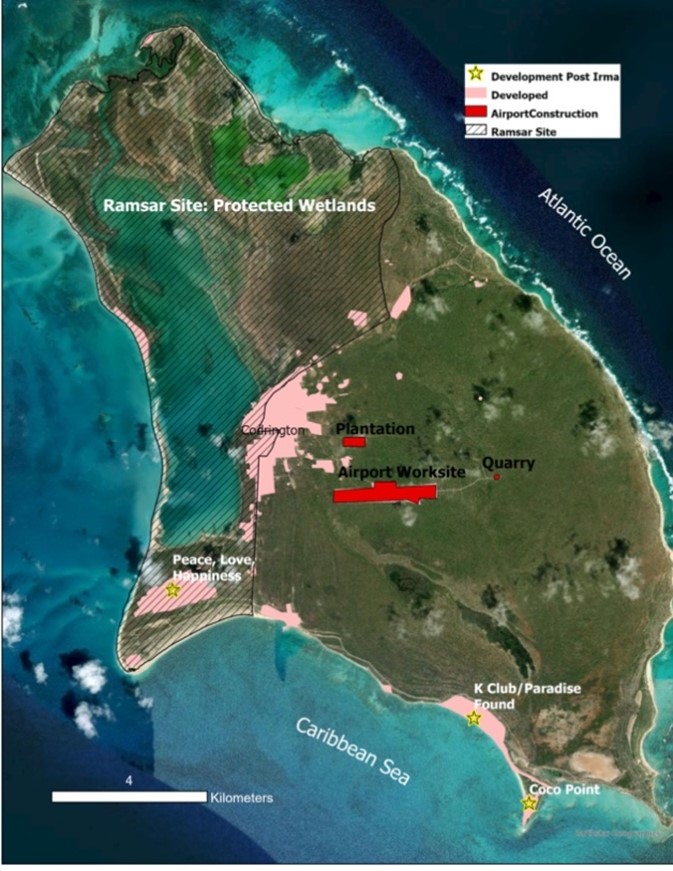 One development is “Peace, Love and Happiness,” funded by American business magnates Steve Anderson and Jean Paul DeJoria. This project alone, for which construction is well underway, covers 650 acres of the National Park, nearly 2% of the island. The proposal includes around 500 homes, golf courses and a marina within the Codrington Lagoon to harbor the mega-yachts of the rich.

Meanwhile, the central government has extended little peace, love and happiness to Barbudans. “Those who may intend to become economic terrorists in this country, they would have to face the full extent of the law for any infractions whatsoever,” said PM Browne in 2015. This is how he referred to those opposing his plans for the “Disneyfication of Barbuda,” as environmental anthropologist Sophia Perdirakis called the reforms in a webinar organized by the Climate Litigation Accelerator at the New York University School of Law’s Center for Human Rights and Global Justice. This is a remarkable contradiction for a government presenting itself as a champion of a treaty (Escazú) whose original contribution to international law is the protection of environmental defenders’ rights.

The contradiction has recently sharpened. In July 2020, after Barbuda's only member of parliament Trevor Walker attended a protest against PLH, PM Browne told the press “Anytime they do anything illegal over there I am sending the police and army … I rather fight them and resign than to turn a blind eye.” In September 2020, at another peaceful protest against PLH, two Barbudan Councilmembers were arrested and charged with trespass and breaking COVID rules for not wearing facemasks.

The third warning Barbuda offers for the future is the following: just as the climate crisis presents an existential threat to human rights, human rights violations open the door to environmental deterioration and further global warming. According to the Global Coral Reef Alliance, the projects in Barbuda “will cause significant, and probably irreversible, deterioration of water quality in Codrington Lagoon, Barbuda’s major fish nursery ground.” The golf courses, resorts and houses will consume land essential for farming, animal breeding and pasture, and protected species. The developments need vast amounts of fresh water, requiring large-scale desalinization, a process that generates a toxic sludge that can seriously damage coral and sea life. Replacing mangroves, sedges and wetlands with shore-line structures will drastically weaken Barbuda’s resilience to sea level rise and other extreme weather events that will intensify yearly, as the 2020 hurricane season laid bare.

Today, Barbuda’s past and future identity hang in the balance. If the government is to take seriously its proffered commitment to international human rights, the environment and future generations, it needs to respect “communal land rights and conserve Barbuda's heritage, culture and environment,” as the Barbuda Silent No More movement has demanded.

The rest of the world should be paying close attention. Barbuda's fate, for better or for worse, will be evenly distributed across the world before too long.

Elizabeth Donger, MPP, is a student at NYU Law. Her non-profit work and scholarship focuses on climate justice, migration policy and child protection. You can follow her at @elizdonger.