Why have global leaders continually been ignoring the views of Muslims—and especially of Syrians—on conflict?

All politicians in free and democratic societies know they can’t ignore public opinion. Through good leadership they can help to shape public opinion, but when election day comes they must be on the same page as their voters. Knowing this, why are the views of Muslims around the world, and most critically now in Syria, continually ignored? Arguably, these omissions have fuelled civil wars and mass migrations of refugees across the Middle East and North Africa (MENA). Syria is now a magnet for international Jihadists inspired by the Islamic State. The ISIS “franchise” is expanding globally, and the Super Powers have been taking sides with regional allies over the future fate of the Assad regime.

But the prospects for making peace in Syria are actually good, at least as far as the people of Syria are concerned. All sides have suffered and they want an end to war. With regards to the most serious abuses of human rights, it might be assumed that only the Sunni—who have rebelled against President Assad’s rule—are the victims of the regime’s excesses, but this is not the case.

The prospects for making peace in Syria are actually good, at least as far as the people of Syria are concerned.

In a poll on justice issues, Alawites also report being subject to arbitrary arrest, torture and killing by the state military and security services. However, the Sunni are able to report their human rights abuses to their government agencies, NGOs and IGOs in opposition-held areas. Similarly, the Kurds report abuses to the various Kurdish political parties that represent them in Syria. But the Alawites have no one they can report abuses to in government held areas. Significantly then, the Alawites placed the notorious and much feared Air Force Intelligence agency—established by Assad’s pilot father, who was President before him—at the top of their list of institutions to be disbanded. The Sunni and Kurds, in common cause, did the same.

Recent polls conducted by ORB International in Syria and IIACSS in Iraq also confirm the people’s desire for peace in the region. Three in four (75%) say it is “very/somewhat likely that Iraqis can put their differences aside and live side by side again” and 65% in Syria agree with the same statement. Interestingly, 74% of Iraqis and 70% of Syrians also oppose dividing their country up. But only 39% of those who support division want it done along the lines of Iraqi Kurdistan, while 38% want the division to be similar to the federal system in the United States (the remaining 23% did not know).

With regards to ISIS, only 5% in Iraq say they are having a positive influence, rising to 22% in Syria. However, while the numbers supporting ISIS are still in the minority, 81% in Syria and 85% in Iraq believe ISIS is a foreign/American-made group. Indeed, both UK and US intelligence analysts attribute the rise of ISIS to the disbandment of the Iraqi army, without pay, and disgruntled generals who sought revenge against the US and its allies following their invasion. 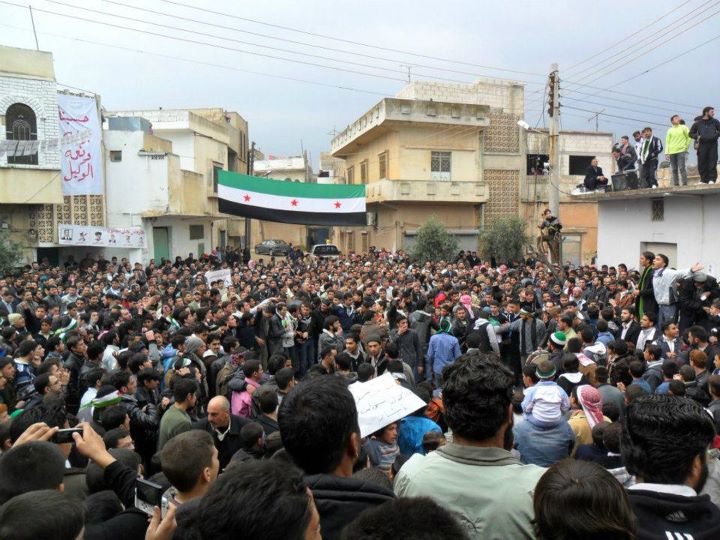 Syrians employ peaceful protest to call for a change in government in the midst of war.

Similarly, polls run ten years ago in the UK suggested that Western foreign policy in the Middle East played a significant role in the disaffection and radicalisation of Muslims responsible for the 7/7 London bombings. These grievances have remained unaddressed, only to be aggravated further by democratic deficits manifest in the Arab Spring and Sunni/Shia splits across the MENA region. All of these events, unfolding in the tragedy that is Syria, prompted King Abdullah of Jordan to tell the UN General Assembly that we are now in a third world war.

Our world is clearly changing rapidly, and politics are no longer just local. Although we do not yet enjoy many benefits of democratic institutions above the state level, regional and global public opinion do help to shape the conflicts of the world. But it is not being used to its potential to find effective solutions.

There are a few notable exceptions: Transparency International, for example, does a very good job of monitoring public opinion and corruption in more than 100 countries, with a view to bringing the corrupt to public account. In addition, WIN Gallup International samples world public opinion on a selection of critical issues of global concern on an annual basis.

As an example, this year WIN Gallup International’s chosen topic was serious breaches of international law and the imposition of UN sanctions. A majority of the world’s citizens support sanctions as an appropriate action to be taken against member states that break their UN commitments. Not surprisingly, states under threat—such as South Korea and Ukraine—most strongly support the sanctions that back their position. On the other hand, the people of Palestine do not support sanctions, as such methods have not worked for them in their search for Israeli compliance with UN resolutions.

Clearly the successes and failures of all international and human rights law can be monitored in this way, globally, transnationally, regionally, and in states. It is especially important to monitor progress for minorities, as discrimination can all too easily lead to disaffection and violence. Monitoring such progress can now be done with a perceptions based peace index.

Fact-based peace indexes are able to track the intensity of conflicts, state-by-state, post fact and post mortem. The results are a chilling reminder of the failure of our international institutions established to prevent violent conflict. However, perceptions based indexes can track much more than this. They can tailor their demographics and focus their questions to explore any issue in any population. In other words, they can measure what people being affected by conflict actually think and the world should listen.

Only by exposing the fears that people share, and their genuine hopes for peace—objectively, honestly, from all sides—can we begin to have the dialogue needed to prevent the tragedies unfolding before us. Public opinion as truth telling can do this and help to make the world a more just and safer place for all its citizens.