As countries integrate or associate with the European Union (EU)—which espouses gender equality as a basic human right—Lesbian, Gay, Bisexual, Transgender and Intersex (LGBTI) rights in southeastern Europe have gained prominence. LGBTI groups now have an increased profile and more resources to combat physical threats, social ostracism, and economic discrimination. However, these groups have also suffered backlash in the form of discriminatory laws and violent acts. Shaped largely by misinformation, both deliberate and unwitting, on how LGBTI people live and what their equality means for society, public views on LGBTI rights in the region are predictably negative.

On average in Western Balkans countries—according to a 2015 opinion poll funded by USAID—58% of citizens believe homosexuality is a sickness, 54% believe that if homosexuality is normal then religion would approve it, and 50% believe that in a “normal” family, a child can’t become homosexual. There is also a direct correlation between knowing someone in the LGBTI community and having considerably less homophobic and transphobic attitudes—a key to lasting change. The problem is, in the Western Balkans only 1 in 10 citizens know someone who is LGBTI, compared to the US where 9 out of 10 citizens know someone who is an LGBTI community member.

Advocates must go beyond victimization with positive portrayals of LGBTI contributions to society.

Societies in this region also have fundamental problems with same-sex couples adopting children, although one third to one half support gay marriage rights. In addition, in this region three out of four LGBTI members been psychologically tortured and verbally abused, one out of four have been victims of physical violence, and one out of two has been discriminated against, all because of their sexual orientation and gender identity. However, on certain issues like fair treatment in employment and hate crimes protection, and among certain groups—such as youth, urbanites, and the professional class—there is still considerable opportunity to sway public opinion.

The National Democratic Institute (NDI) believes that a key ingredient to advance LGBTI rights is for these communities to clearly articulate demands for their full equality as citizens. At the same time, changing entrenched negative attitudes toward LGBTI issues and citizens means greater public exposure to the problems that LGBTI people face. Advocates must go beyond victimization with positive portrayals of LGBTI contributions to society.

With this in mind, NDI designed and commissioned a public opinion poll together with Civil Rights Defenders, the Victory Institute for gay and lesbian rights and local LGBTI organizations. We conducted this poll first in Serbia in 2014 and later in 2015 in six countries in the Balkans region of Europe: Albania, Bosnia-Herzegovina, Kosovo, Macedonia, Montenegro, and Serbia. The goal of the research was to provide partners with unprecedented country-level information about public attitudes on LGBTI issues.

The research included in-person interviews (approximately 1,000 in each country) with the general population, an online survey of the LGBT community (with 655 total respondents), as well as separate sets of focus groups with the general population and LGBT persons (three sets in each of the six target countries). The results revealed low levels of knowledge about the groups comprising the lesbian, gay, bisexual, transgender and intersex communities, and a correspondingly high degree of resistance to conferring equal rights and opportunities based on sexual orientation and gender identity. At the same time, poll respondents roundly disavow physical violence against LGBTI members of society. And for certain demographic groups, among them young and urbanized citizens, there is a small and perhaps growing acceptance of LGBTI rights. The general population perceives discrimination and violence against LGBTI citizens to be far less in frequency and scope than LGBTI members report. The general population also rejects same-sex marriage, but is prepared to see some marriage-related rights extended to same-sex couples. 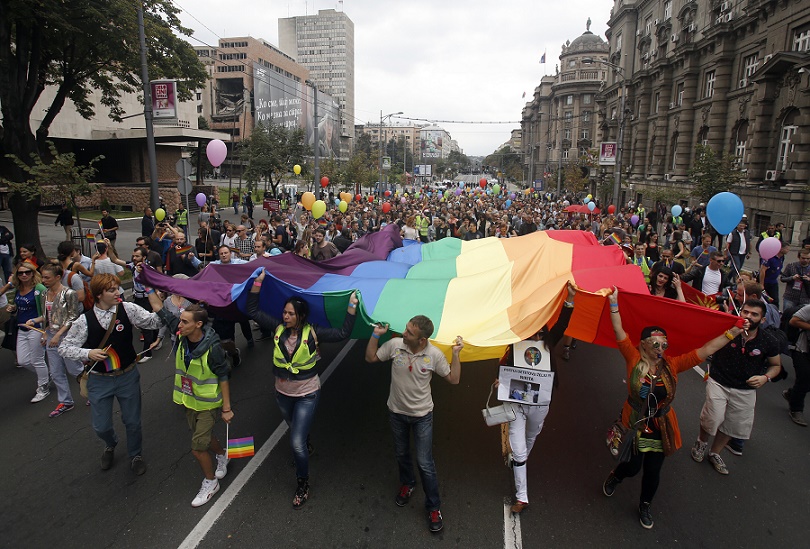 In the last two years, civil society organizations (CSOs) have used this research to develop strong messages to engage government officials, MPs, the media and the general public. NDI also presented data from the poll to LGBTI groups, as well as to elected officials and the public at-large, across the Western Balkans. NDI assisted LGBTI groups to begin the long-term work of building their activist base, engaging the public to shift general sentiment, and advocating before legislators.

The immediate results of using this public opinion poll data have been impressive. In some countries, including Macedonia, Kosovo and Bosnia and Herzegovina, LGBTI groups and political leaders met in their first official engagements ever. This provided a unique opportunity for LGBTI organizations and political leaders to learn about the challenges, attitudes and perceptions that LGBTI people face in the Balkans. During our visits to five Western Balkan countries, NDI received affirmative responses from many government officials and political party leaders, many of whom committed to develop and advance policies to improve social and political protections for LGBTI persons. In addition to pride parades in Albania, Montenegro and Serbia, this year was also marked by low key, first-ever LGBTI related peaceful walks in Kosovo and Bosnia-Herzegovina. Activists learned from the poll that framing “Pride” as a peaceful walk resonates far better with society then the pride parade formulation. The presence of Hashim Thaci, President of Kosovo, on the peaceful walk organized in Pristina, demonstrated true progress in the dialogue between state officials and civil society organizations. In other Western Balkans countries, we are still waiting to see country leaders publically supporting LGBTI community members.

The media also picked up on this research, with a number of articles throughout the Western Balkans quoting the polling data. When data is used systematically and strategically, and messages are tailored well, there is indeed an open space in mainstream media for credible information about LGBTI communities and their position in the society. In the past, most mainstream articles were sensationalistic in a negative context, further boosting prejudice and stereotypes. However, from the new polling data, media outlets received credible and trustworthy information as well as well-shaped messages regarding the LGBTI community and their position in society, and we didn’t record a single negative article quoting this polling data.

Despite notable progress, NDI focus groups and interviews with LGBTI communities revealed that fear of publicly identifying as a sexual or gender minority was still a significant challenge. NDI’s public opinion polling in Serbia found that social perceptions of LGBTI persons improve when LGBTI organizations are more active and visible, and when the media covers activity by LGBTI groups in a positive light. Widespread discrimination and violence towards LGBTI individuals and activists often prevent activists from openly identifying their sexual orientation or gender identity, which in turn prevents them from taking part in public efforts to address these and related issues. Assisting LGBTI organizations to engage with citizens safely, and to increase public discourse with the media and political leaders, continues to be an important goal. There has been positive movement, but there is still a long way to go.