For those working on human rights, access to reliable data has become an extremely important tool. James Ron and his colleagues have stressed the importance of data-driven conclusions, while activists covering issues from LGBTIQ+ rights in southeastern Europe to democracy in Myanmar are finding ways to use research to bolster their advocacy and human rights efforts. Indeed, claims supported by data and meticulous research better resonate with tech-savvy, discerning audiences. In a world where barriers to information are minimal—anyone with an Internet connection can spread (and read) false claims—quality of information is more crucial than ever.

In Venezuela, freedom of expression and the press under Nicolas Maduro has particularly suffered. Despite already tight media restrictions in the country, the Maduro regime has cracked down even further on journalists and dissidents over the past six months. As protests regarding shortages and soaring crime rates have become more common, so has repression of the media. Remaining independent news outlets have reported multiple instances of harassment, especially of journalists covering protests. Perhaps the most disturbing account of violence happened last June, when a group of armed thugs, allegedly Chavista supporters, held a news team for the online channel VIVOPlay at gunpoint in broad daylight.

One “popular” form of authoritarian control of information is the vetting of socio-economic data. Despotic regimes tend to be adamant about controlling local researchers and academics. The Chavista regime, for example, was particularly sensitive to any information pertaining to Venezuela’s precarious economic situation, food and medicine shortages and soaring crime rates. Last year, the Bolivarian Intelligence Service (Servicio Bolivariano de Inteligencia or SEBIN) arrested the president of the Venezuelan Association of Clinics and Hospitals, Carlos Rosales Briceño, after he publicly denounced the scarcity of basic supplies for health centers. He was freed hours later after questioning. Murder rates and criminal activity statistics have also been restricted since 2004, and no data at all was provided for five years (from 2010 to 2015). Officials in state agencies have mentioned that the Maduro regime is deliberately engaging in actions that “destroy the national statistical system in order to hide the dire economic situation the country is facing”. The government routinely turns down access to information requests and there is no legislation obligating the government to share information with civil society. Indeed, The Economist even accused the government of self-censorship and of muzzling its own bureaucrats. 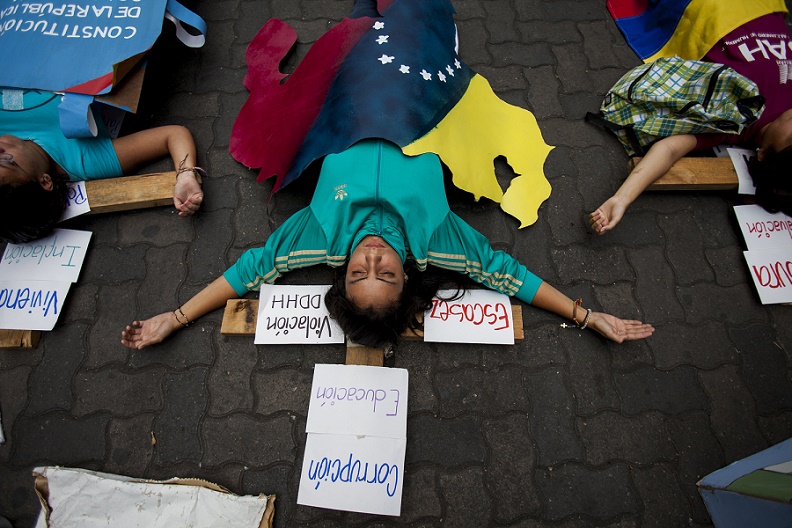 Protestors gather to demonstrate against high rates of crime, high inflation and shortages of basic goods. With government restriction on information, however, it is hard to know the extent of the situation in Venezuela or what policies would be appropriate to remedy it.

Without appropriate metrics, nobody really knows how bad the situation in Venezuela is or what appropriate policies should be implemented to remedy it. Reliable data is extremely hard to come by, forcing independent organizations to make estimations that risk being inaccurate. Take, for example, murder rate statistics. The most cited figures for current murder rates in Venezuela come from the Venezuelan Violence Observatory (OVV). However, given the lack of access to information, the observatory relies heavily on estimations, sums of data, and some statistical modeling. Ideally, a proper data set would rely on direct collection and analysis of data through surveys of the population. Given Maduro’s restrictions on researchers, this is nearly impossible. In fact, Dr. Dorothy Kronick and Caracas Chronicles, based on their own data set obtained through police leaks, have estimated a lower murder rate than that of the OVV and point out some of the flaws behind the organization’s research methodology. The revised data shows a relatively modest yearly increase in murder rates, as opposed to marked year-to-year spikes characteristic of the OVV’s reports. Dr. Kronick’s conclusions are not as flashy as the OVV’s, but they are more akin to reality. For example, the new data reflects a steady erosion of security and safety marked by years of governmental mismanagement, whilst the OVV shows crisis-like spikes in recent years.

Access to reliable data has gone beyond being a useful tool to becoming a unifying rights issue.

In Venezuela, access to reliable data has gone beyond being a useful tool to becoming a unifying rights issue in and of itself. For example, The Press and Society Institute (Instituto de Prensa y Sociedad or IPYS), a civil society organization, lists access to information as one of their main advocacy goals, giving it the same importance as more traditional calls for press freedom and freedom of assembly. Transparencia Venezuela, a corruption watchdog, focuses heavily on public finance data monitoring and analysis. One of the most promising organizations in this area is the aptly named Vendata. Still in its embryonic stages, Vendata is a free online portal that gathers and curates socio-economic information and data and publishes it in an easily accessible format for journalists, NGOs and individuals. Most of these organizations have also joined the ProAcesso Coalition (Coalición ProAcceso), a broad umbrella organization whose mandate is “the recognition and respect for the right to access of public information as a fundamental right and its advancement as a crucial tool for the development of public police and use for the defense of human rights [emphasis added].”

Access to data is an issue that unites business associations, journalists, academics, human rights advocates and even nutritionists under one same banner. And where there is a complete blackout on official data, civil society organizations are trying to fill the void. For example, Fundación Bengoa, an organization that originally focused on nutritional health education, publishes data on malnutrition levels on children, as the government stopped publishing these data on 2007.

Access to data is a right that should be guaranteed to individuals in Venezuelan society, and civil society’s focus on data access is both an “end” and a “means” to counter human rights abuses. Furthermore, the dissemination of reliable data bolsters other human rights claims, such as freedom from violence and freedom from hunger. In Maduro’s regime, as in the one before him, data is power—but with better access, civil society can wield that power.