When it comes to public opinion on drone strikes, the UN and NGOs may have more influence than we think.

The use of unmanned aerial vehicles, also known as drones, in United States counterterrorism operations has become a “key feature of the administration’s foreign policy”. In late 2014, the US reached a milestone by conducting its five hundredth drone strike to target suspected terrorists in Pakistan, Yemen and Somalia.

This growing reliance on drones to target militants has generated widespread condemnation worldwide. It has also become the subject of considerable controversy within the US itself. Recent debates have largely centered around two sets of questions: 1) the effectiveness of drones in eliminating terror threats; and 2) the legitimacy of strikes under international law. Domestic supporters point to drones as both effective for disrupting terrorist networks, and consistent with legal principles of self-defense and military necessity. Critics respond that attacks spawn grievances resulting in more terrorists than they eliminate, and represent fundamental violations of international law by breaching other countries’ sovereignty while harming countless civilians. Detractors and defenders alike have sought to directly sway the US public by putting forward these contending arguments in the marketplace of ideas. 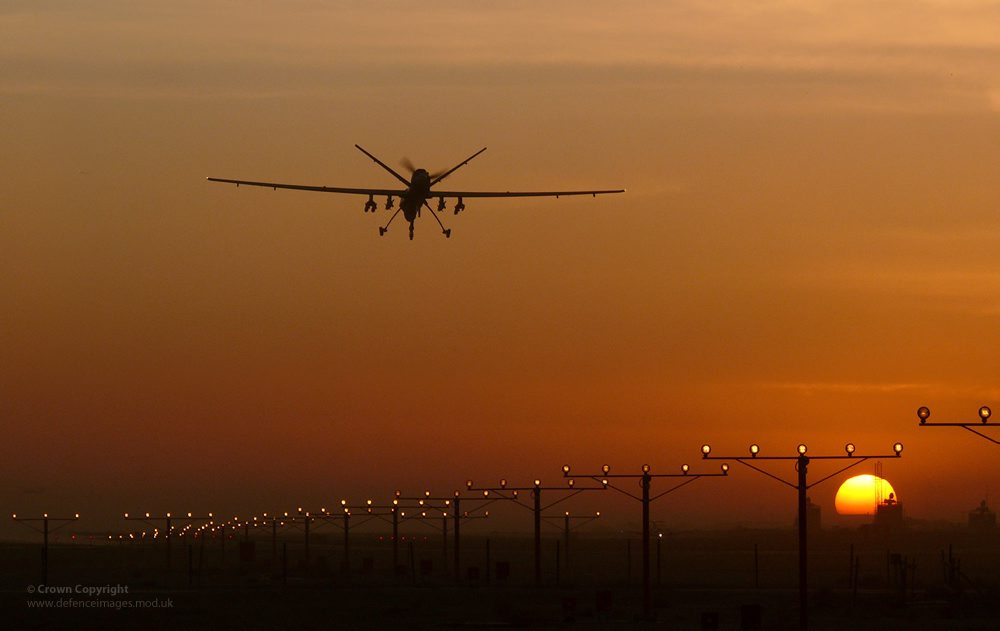 Flickr/Ministry of Defense (Some rights reserved)

A Reaper drone returns to base in Kandahar, Afghanistan.

Despite this vibrant debate, little is known about which voices or arguments resonate most with the US public. Do appeals to international law change citizens’ opinions toward drones, or is the public more persuaded by claims about their effectiveness? Despite its central importance in helping to understand the roots of domestic attitudes toward the use of force in the United States (and potentially beyond to other frequent drone users, like Israel), answers to this question are far from obvious.

On its face, opponents of US drone strikes should face an uphill battle, especially when pushing criticisms grounded in international law. Across various countries, the threat of terrorism tends to generate fear, anxiety and a thirst for security, reactions that should make citizens suspicious of upholding legal commitments. Given the secrecy often surrounding drone strikes, the US government also enjoys an immense informational advantage over the program’s details. Moreover, the largely bipartisan agreement amongst Republican and Democratic politicians behind drone policies (a rarity in the current polarized US landscape) presents formidable obstacles for any contrary positions put forward by critics. In line with this political consensus, available polling data in recent years points to consistently favorable US public support for drone strikes, views that are seemingly impervious to outside critiques (legal or otherwise).

To investigate the basis of public support for drone strikes—whether focused primarily on concerns of military effectiveness or international law—we conducted a survey experiment in September 2013 with a national sample of around 2,000 US adults, with assistance from Time-sharing Experiments for the Social Sciences (TESS) and the survey research firm GfK. Before being asked about their support or opposition toward drone strikes, respondents were randomly given additional information about the drones debate that differed on two main dimensions. First was the type of actor making the argument—the US Government (specifically the Joint Chiefs of Staff given their stature on the use of force), the United Nations, or a human rights nongovernmental organization (NGO) like Human Rights Watch (HRW); and second, the line of argumentation for or against drone strikes—that is, was it based on military effectiveness, the violation of national sovereignty, or the violation of civilian protection. To remain consistent with the existing drones debate in America, the US government position was in favor of the effectiveness and international arguments, while the UN and NGO sides took a more critical stance. By comparing the answers of respondents in each of these groups to a separate baseline group that received no additional prompting, we could help to isolate the relative effect of arguments rooted in international law versus military effectiveness on support for drone strikes (for a full summary of the survey, see here).

Despite reasons to expect that drone strikes would pose a difficult case for the arguments put forward by the UN and NGOs, we find that these critics actually possess a concrete ability to sway public opinion, though with important caveats. Compared to their UN and NGO opponents, government claims actually have little additional impact on how its citizens think about drones. By contrast, when evaluating the various arguments concerning the merits of drone strikes, citizens appear particularly moved by criticisms rooted in international law. Pronouncements by either the UN or Human Rights Watch (HRW) that drone strikes violate the sovereignty of targeted states, or do not take sufficient measures to prevent civilian deaths, were associated with a drop of 6-8% in public approval for drones. Although modest, the available polling data suggest this would translate into a much more even split between US citizens for or against the use of drone strikes by their government. The relative impact of international legal appeals is also of similar size to that found in other studies on public opinion in related issue areas.

On the other hand, the public does not view all arguments equally. Claims both for and against the military effectiveness of drone strikes had fairly minor effects. While UN or NGO criticisms are still associated with declines in support, the effects are half the size found for the international law arguments based on violations of national sovereignty or civilian protection.

Taken together, our analysis suggests that in the case of counterterrorism, which should in many respects be a hard test for international law, appeals drawing on international legal arguments can influence the attitudes of citizens in the country that is currently the world’s foremost user of drone strikes. This is surprising given the large literature showing that Americans tend to be prudent and realpolitik in terms of their support for the use of force, not driven by concerns of legality or morality. Our results confirm that UN and NGO critics of US policy can gain some traction even within a relatively skeptical public. Their arguments are likely to resonate most when centered on legal issues, however, rather than on questions concerning the military effectiveness of drone strikes.

These findings also have important implications for what has become one of the “signature aspects” of the Obama Administration’s foreign policy, the use of drones to target suspected terrorists. A number of studies have convincingly shown that public opinion matters in foreign policy, if not affecting whether a country initiates the use of force, but by affecting the sustainability of that decision. The US was able to intervene in countries like Vietnam, Lebanon, Somalia and Iraq, but leaders ultimately found that their ability to continue those interventions was hamstrung by growing public opposition. Former Central Intelligence Agency (CIA) director Michael Hayden has implied that public attitudes are important in the specific context of American drone strikes, suggesting that “no president can do something repeatedly over a long term without that broad popular support.”

While more work certainly remains to be done, our research suggests that international law presents an important pathway through which controversial policies like drone strikes will be debated and challenged in the marketplace of ideas, both in the US and in the international community more broadly.

Sarah E. Kreps is an Associate Professor of Government at Cornell University . She is the author of Coalitions of Convenience: United States Military Interventions after the Cold War (Oxford University Press, 2011) and co-author (with John Kaag) of Drone Warfare (Polity Press, 2014).

Geoffrey P.R. Wallace is an Assistant Professor of Political Science at Rutgers University, New Brunswick. He is the author of Life and Death in Captivity: The Abuse of Prisoners during War (Cornell University Press, 2015).