A global survey of over 800 corporate leaders shows overwhelming recognition that companies must respect human rights, although confusion regarding the exact scope of their duties is a key obstacle to action.

The UN Human Rights Council endorsed the Guiding Principles on Business and Human Rights in 2011. Though an important milestone, the debate continues on the scope, content, and legal status of companies’ responsibility to respect human rights asserted in those Principles. To gain closer insights into this debate, between 2014 and 2015, the Universal Rights Group, together with partners including DLA Piper, Eli Lilly, Global Business Initiative on Human Rights, Mazars and Telenor, commissioned the Economist Intelligence Unit (EIU) to undertake a study of business opinions about human rights. They surveyed 853 senior executives from a range of industries, and did in-depth interviews with nine corporate leaders and other independent experts. The results were surprising, showing strong support for the claim that business needs to take human rights seriously.

A large majority of executives now believe that business is an important player in respecting human rights, and that what their companies do—or fail to do—affects those rights. In the EIU survey, 83% of respondents agree (74% of whom do so strongly) that human rights are a concern for business as well as governments. Similarly, 71% say that their company’s responsibility to respect these rights goes beyond simple obedience to local laws. Finally, for each of the 11 clusters of human rights in the survey, most respondents report that their firms’ operations have an impact.

A large majority of executives now believe that what their companies do—or fail to do—affects human rights.

This degree of agreement represents a substantial shift from views in the past. Arvind Ganesan, director of the business and human rights division at Human Rights Watch, recalls that as recently as the late 1990s, “… there was no recognition that companies had human rights responsibilities”.

Further, the survey showed companies see human rights mainly as a stakeholder and ethical issue. The leading drivers of corporate human rights policies, which are broadly consistent across industries and regions, are: building sustainable relationships with local communities (cited by 48% of respondents); protecting the company brand and reputation (43%); meeting employee expectations (41%); and moral/ethical considerations (41%). Only 21% say that a clear business case is driving their human rights policy. Similarly, when asked about the main barriers that their companies face in addressing human rights, only 15% of respondents agreed with the statement, “Business would incur costs/see profit margins reduced”.

Nevertheless, while corporate attitudes are evolving fairly quickly, concrete steps to reform company policies and to communicate such changes externally are slower to follow. For example, although 44% of respondents say that human rights are an issue on which chief executive officers (CEOs) take the lead, only 22% say that they have a publicly available human rights policy in some form.

Interpreting these results is a matter of perspective. For some, it shows progress, given the relatively short length of time that human rights have been on the corporate agenda. As one corporate leader put it, “Big corporations need time to change; processes take time to change. (...) It is just a reality.” For others, the gap between the proportion of respondents willing to acknowledge the importance of human rights to business, and the smaller proportion saying that they have taken action, is disappointing and indicative of corporate foot-dragging on human rights. 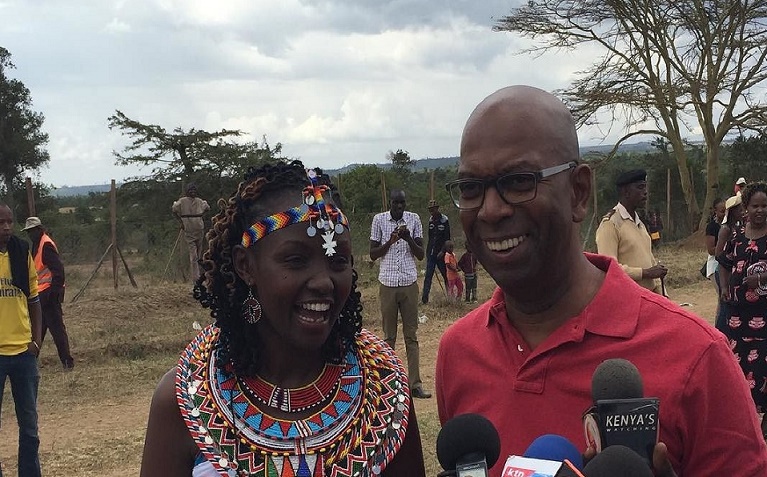 Bob Collymore, CEO of the Kenyan telecommunications giant Safaricom, meets with women's rights defender Josephine Kulea. Collymore is an enthusiastic promoter of cooperation between the business and human rights communities.

What’s holding companies back? Ruth Davis, head of the cyber, justice and national security programme for IT industry group, techUK, said on human rights issues businesses are “often uncertain of where to start.” Respondents list a lack of understanding of their company’s responsibilities in this area (32%) and a lack of training and education for employees (26%), as the first and third most common barriers to progress. Similarly, new initiatives that respondents are most likely to say would help them carry out their responsibilities are about providing data: public benchmarking of company performance (39%) and access to reliable, independent information on country-level human rights situations (32%).

One year after the publication of the EIU’s survey and study, it remains more important than ever to strengthen engagement between the human rights and business communities. The UN Human Rights Council has controversially embarked on a process to draft a new, binding international human rights treaty on business and human rights. By trying to impose a solution, rather than choosing to engage and work with businesses, this state-centric process has already become mired in difficulties.

Rather, members of the Human Rights Council would be better advised to recall one of the main lessons learnt from the EIU survey—most multinationals are now convinced of the importance of respecting human rights, and are committed to walking along the road from principles to practice. The best way to move further along that road is by states and businesses agreeing to work together in partnership and cooperation, rather than tension and opposition.