The economy we have built isn’t the economy that delivers shared prosperity and shared security for the majority. The business and human rights movement has a fundamental role to play.

“Globalisation isn’t working” was the post-Brexit conclusion of Financial Times columnist, Philip Stephens. The shock vote has left UK liberals and progressives reeling, and wiped billions from the value of companies around the world. Another fear is that this may be the sharpest crystallisation yet of political leadership from a populist, hard-right, nationalism. This shift also appears to be gripping sections of the USA, major European nations, India, and many more countries.

The majority of Brexit voters came from two social classes: large sections of working class people, and a disappointed middle class. Both feel that globalisation, epitomised by EU membership, has not worked for them. Since the 2008 crash, both have seen their incomes stagnate or fall, and both have felt an increasing precariousness and insecurity from the casualization of work in the UK. Each of these factors has been exacerbated by the unequal UK government’s austerity measures that started in 2010. While public services have been withdrawn, the luxury goods market exploded, banks have been bailed out with public money and astronomical executive bonuses continue to be paid. In addition, international companies with massive operations in the UK have contributed almost no tax. Companies like Sports Direct have paid below the minimum wage, and workers on exploitative “zero hours contracts” were in such fear of losing their jobs that they were scared to take time off to care for a sick child or their own ill health.

Unscrupulous politicians have exploited understandable public ire to blame “the European Union”, “immigrants”, “the establishment”, “experts”, and “human rights”. But the economic and social causes of their anger and outrage point elsewhere. 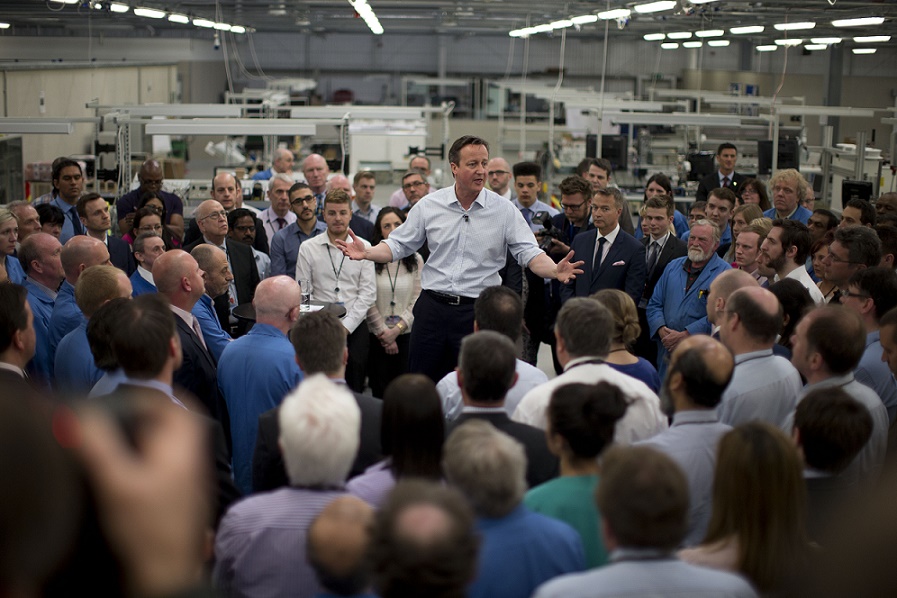 Former UK Prime Minister David Cameron appeals to manufacturing workers in London. The result of the Brexit referendum can be largely attributed to the British middle-class's disillusionment with globalization-minded economic norms.

Linking business and human rights is about how companies make their money, not what they do with the money they make. Governments and business together have the opportunity to create more inclusive economies with greater equality of outcome and opportunity, where risks are shared. The alternative is what we have now: almost zero public trust in companies, and a rising culture of blame focused on the most vulnerable in our societies.

Here are four stark contrasts in business approaches to achieving the human rights of livelihood and security that have been reported to the Business and Human Rights Resource Centre in recent times:

Abuse of human rights in markets, and the rise of inequality and insecurity are not inevitable.

Abuse of human rights in markets, and the rise of inequality and insecurity are not inevitable. If our societies want to cleave to principles of freedom, human dignity, and fairness, then markets have to demonstrate they can deliver these values. This is surely the time when governments, business, and civil society have to think radically about how to create more inclusive economies. If our business and human rights movement cannot contribute powerfully to this agenda, then we risk, rightly, sinking into irrelevance.

It is time for progressive companies to separate themselves from self-seeking business associations that oppose any incentives and regulation for greater inclusivity as an unacceptable “cost to business”. Companies need to cooperate boldly with governments for ambitious goals such as a living wage, as the ACT initiative (involving international brands & retailers, manufacturers, and trade unions) is doing in South East Asia. Companies need to go beyond respecting to fulfilling human rights.

It is time for timid governments to move beyond asking for voluntary corporate transparency in domestic and international supply chains, and instead support responsible companies by outlawing exploitative behaviour through action such as mandatory due diligence to prevent human rights abuse, enforced by well-resourced inspectorates. We need a fair tax system, and we must avoid the race to tax haven levels of corporate taxes (perhaps in panic at the prospect of disinvestment, the UK has just announced a cut in corporation tax to 15%, passing the debt burden from 2008 further to the public).

Our movement needs to connect with the fast-growing movement of “for-benefit” corporations, and social enterprises that seek a radical shift in the purpose of companies. The fact that Paul Polman, CEO of Unilever, has declared he wants the consumer goods giant to consider B-Corp status demonstrates the leadership that we need from companies to balance the need for profit, with the need to earn a social license to operate by creating positive social impact.

“Globalisation isn’t working”. At least, the current model is simply not sustainable. That’s the bad news. However, the business and human rights movement has an enormous amount to offer in terms of principles and experience in generating feasible and transformational solutions to this global challenge. We must make this urgent contribution count. The danger is that unless we are bolder, more forthright, and better connected to similar movements, we will become irrelevant—our voices could be drowned out by the baying voices of blame and bigotry.

This is a revised version of an article first published by the Business and Human Rights Resource Centre.