On the margins: secular human rights in Turkey

In Turkey, Muslim groups have used the “human rights” framework to protect their religious practices, such as wearing headscarves in universities and workplaces. But what happens when the “rights” demanded by dominant religious groups contradict the rights and demands of others?

Sometimes religion and human rights simply do not get along. Religion often does a better job at mobilizing the masses for social reform, and some believe that it can bring greater legitimacy and impact to the rights movement. But what happens when a country’s majority religion co-opts the human rights movement, to the detriment of minority groups?

What happens when a country’s majority religion co-opts the human rights movement, to the detriment of minority groups?

Although there is no shortage of human rights NGOs in Turkey, many of the secular entities have become marginalized, with more power and attention going to organizations favoured by the ruling Justice and Development Party (AKP). Prior to the AKP’s rise to power, most secular NGOs had to emphasize their dedication to Mustafa Kemal Ataturk (the founder and first president of the republic of Turkey), rather than focusing specifically on human rights. After consecutive military coups, any emphasis on human rights attracted state suspicion, causing most Turkish groups to shy away from the discourse. During the early AKP years, the secular NGOs that flourished were those focusing on Kurdish rights, women and LGBT rights, and legal rights. Conservative Muslim organizations, however, are now growing rapidly, with much greater attention and support.

Since most population statistics list Turkey as 98- 99% Muslim, this growth may not immediately seem like a problem. However, the Alevi population in Turkey constitutes anywhere from 12-25 million people (15-20% of the population) and most Alevis do not want to be considered “Muslim”. Many Sunnis also do not consider Alevis as Muslim, and sometimes label them heretics. In this case, the debate on the co-existence of “religion” and rights is particularly complex. Whose religion, and by what definition? And what happens when the religious freedoms of one group carry more weight than the others?

For the most part, the nascent Islamist movement in Turkey has been successful at staying within the peaceful, non-armed, political sphere. In the early to mid-1990s, headscarves became a heated debate, and Turkish secularists tried diligently to keep women with headscarves out of universities and public employment.

Advocates of headscarves portrayed the debate as a “human rights” struggle, and headscarves quickly became highly symbolic: the persecution of headscarf-wearing women intensified the Islamist movement’s internal solidarity. They framed their arguments in “human rights” language and utilized all available secular venues, such as the European Court of Justice. One of the most well-known applicants to the European Court of Human Rights is Hayrunnisa Gul, the wife of the former Turkish President. Multiple NGOs formed during this time, including IHH and Mazlumder, both of which worked relentlessly to support headscarf wearers who were being pushed out of the public domain. 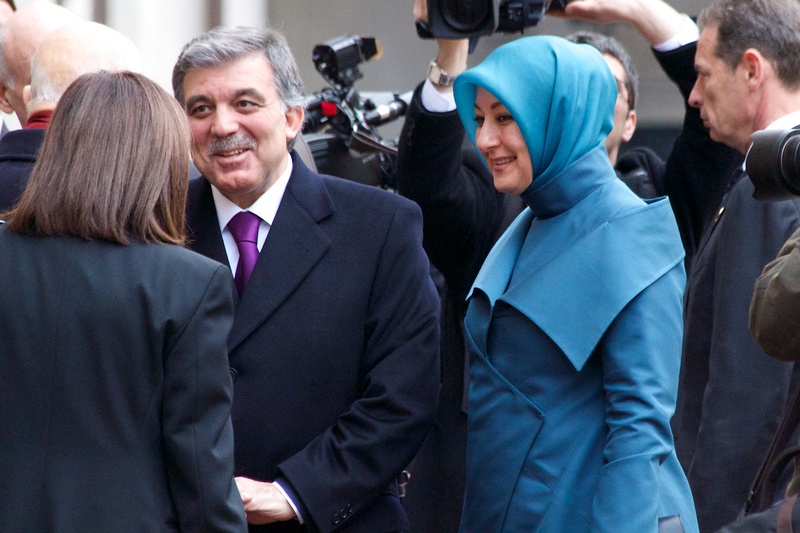 Former Turkish President Abdullah Gul and his wife Hayrunnisa Gul, a well-known applicant to the European Court of Human Rights.

In fact, since its establishment in 2001 the AKP has campaigned against any action limiting Islamic freedoms, with the hijab as a top priority. While headscarves are now allowed almost everywhere (with the exception of a few professions with uniforms), in early September, the NGO Ozgur-Der organized protests against the Turkish government and Ministry of Education for the right of students in middle and high schools to wear headscarves as well. They protested peacefully, but their rhetoric was quite critical of the government. Nonetheless, they did not face any repercussions or police brutality and were granted their wish by the third week of September. This seems to be the norm for conservative Muslim NGOs. However harsh their criticism might be, they do not face a backlash from the government. Indeed, the government mostly alters policies to satisfy these groups’ demands while referring to their protests as “public demands”.

In addition, there is lack of transparency in financial dealings with many NGOs, making it difficult to dissect the nature of their relationship with the government and their access to state resources. One notorious example here is TURGEV, an NGO with the president’s son and daughter on the board of directors.

The government has, of course, allied with a few Alevi establishments and some other minorities in order to have them as “showcases”. Yet Alevis consistently protest that they face systematic discrimination in employment, housing and other opportunities. In one 300-page report from the Religious Affairs Directorate published in 2014, the word “Alevi” is not mentioned once. The directorate itself—which uses public taxes to spread Sunni Islam through building mosques and sending imams to Alevi towns—remains highly contested, even by some conservative Sunnis.

Today, however, the AKP increasingly attempts to appeal to its base without much regard for human rights. Most issues have centred on protecting “family values” and involve alcohol restrictions, abortion laws, remarriage and divorce codes. The debate in Turkey has shifted from headscarves to the “right” of observant Muslims to enjoy segregated buses, beaches, public pools and schools. But how do we frame this as a human rights issue to an atheist, Alevi, Christian, or non-observant Muslim? If human rights activists must engage religion to be effective, but different religions contradict one another on key points, with which side of the religious fence should activists engage?

Islamic grassroots movements have generally disappointed their liberal supporters, as once they acquire political majority they have exclusively focused on their own interests. Advocating for human rights—while also engaging with religious factions arguing for segregation—illustrates just how complex this issue can become.

Pinar Tremblay is a visiting scholar at the political science department of California State University, Cal Poly Pomona. She is also a contributor to Turkey Pulse at Al Monitor and a columnist for the Turkish website, T24. She lives and teaches in Los Angeles.