On the streets of Nigeria, what seems like the “voice of the people” is often just unquestioning followers, echoing the opinions of religious leaders. The human rights community doesn’t need religion for a revival; but it does need to frame rights as relatable and essential, rather than anti-religious.

On the streets of Nigeria, some of the more prominent banners vying for fence space and billboard prestige are religious, mostly Christian. They promise the same kinds of transformative experiences with catchy phrases, from health to wealth and everything in between. Christianity has always been popular in Nigeria. And it is even more so now.

Especially popular is a cool brand of lifestyle Pentecostalism that, at first glance, seems to transcend the problems that exist in the real world (e.g., class, tribe, gender-based violence, etc.). These churches proliferate endlessly, their names interchangeable. They draw large colourful crowds at least three days a week, and receive visions from God to buy up large chunks of real estate for mini-cities, complete with their own universities.

As Jack Synder points out, religion has proven itself a far greater mobilizer for society than any other form of human mobilization. But to say that this is what the human rights movement needs for a revival is to ignore the fact that religion is a troubling and often contradictory institution.

Without doubt, Synder makes a compelling argument for religion as a successful social reform vehicle. But the success stories he parades look far less pretty on ground. The role that religion—personified in 20th century missionaries—played in abolishing cultural practices such as demonizing twin children in Eastern Nigeria is undeniable. But there were costs. Alongside the “good work” of converting millions of indigenous people came a near total cultural erosion of these same people. This included many of their religions, which, demonized too, of course had to go. Yet, the crumbling of indigenous cultures was one of the small costs of the good work that religious colonization carried on its wings.

It is true, as Synder argues, that a disconnect exists between social justice movements and the mass of people they intend to reach. And it is also true that rights bodies need to reach out more effectively. But should religious bodies be at the other end of this reach?  As Larry Cox argues, somewhat paradoxically, in his support of religion working with human rights, “some of the most spectacular expressions of religious fervour come from groups that promote violence, intolerance, misogyny and homophobia.” Still, it is not this paradox that renders religion a dubious vehicle for human rights as much as a lack of accountability. When things go wrong, religion can just cede the jurisdiction of accountability to a supreme being.

In Nigeria, there are countless pending cases of human rights abuse committed in the name of religion. Many of these abuses are committed by the religious leaders themselves. And in these cases, the acceptance and justification of the abuse is often directly linked with the power the religious leader wields. 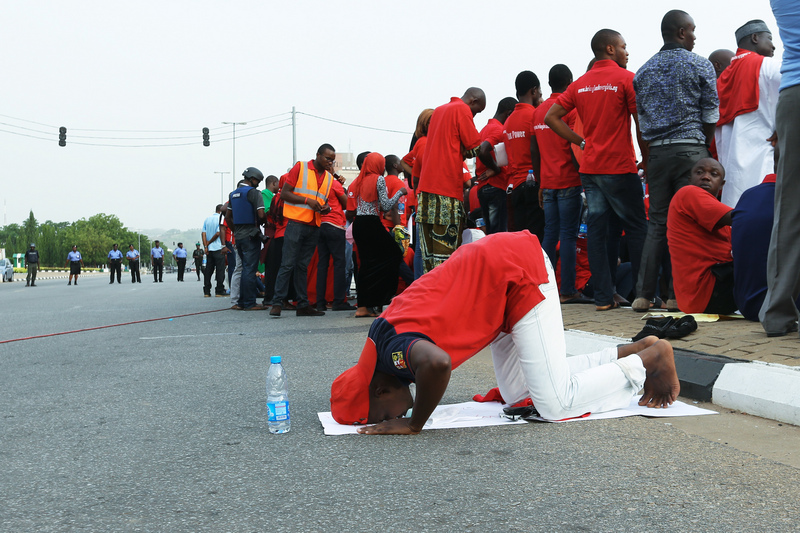 A protester takes time out to say his prayers during a Bring Back Our Girls Protest in Nigeria.

So far, the success of any useful kind of activism in Nigeria has relied not on religious bodies but on secular groups and individual persuasions. The recent Bring Back Our Girls campaign is a salient example. A number of individuals at the heart of this campaign are deeply religious people. Other than these types of individual responses, the common response of religious bodies in Nigeria to myriad forms of human rights oppression is prayer. In fact, there are Christian congregations in Nigeria whose doctrinal stance is solidly anti-activism.

Human rights bodies should study the structures of religious groups and involve the key leadership early on in advocacy planning, including the development of applicable and relatable rights-related messages

To this extent, the ways in which human rights bodies reach out to religious bodies is important. Human rights bodies should study the structures of religious groups and involve the key leadership early on in advocacy planning, including the development of applicable and relatable rights-related messages. Any other drastic method, including attempts to draw attention to excesses of religion in Nigeria, would be counter-productive and labelled as anti-God, which could destroy any chance to provide an alternative view. A good starting point would be studying groups like the Justice, Development & Peace Commission (JDPC), Ijebu Ode, which has worked within the Catholic Church in their diocese. Such analyses would help mainstream human rights bodies understand how to highlight practical examples that human rights are essential—and not anti-religious—thereby securing the attention of religious followers.

Religious leaders in Nigeria, and Christian leaders especially, are at the moment god-like. And their followers are largely unquestioning. Many followers firmly believe that it is God’s place to question a religious leader, not theirs. When questions come up at all, they are immediately drowned out by something that sounds like the voice of the people. But in reality, it is often simply an echo of these omniscient/omnipotent religious leaders.

Also, because an intractable power-circle exists between church and state in Nigeria, religious leaders and politicians alternately employ this collective voice in the raising and silencing of human rights questions. For example, this voice was loud in its criticism of the Nigerian senator‘s marriage to a 13-year-old Egyptian bride in 2010, almost unanimously vocal in its approval of Nigeria’s anti-gay rights bill, and sporadic when a popular religious leader notoriously slapped a female member of his congregation in the name of casting out demons.

There are legitimate concerns with religion, especially in a country like Nigeria, that cannot be glazed over simply because the human rights community loves the numbers and influence that religion brings to the table.  Religion creates an unchecked system, where people reach out to a chosen few who claim to have what the masses need. While this exchange sometimes works out, and at times has even risen above itself in pursuit of justice, for the most part it has become exactly as Arundhati Roy suggests: “just another edifice constructed by the human mind, decimated by human nature.”