The protection and resilience of Human Rights Defenders demands that we all better understand and navigate how power and violence operate in both public and private arenas. 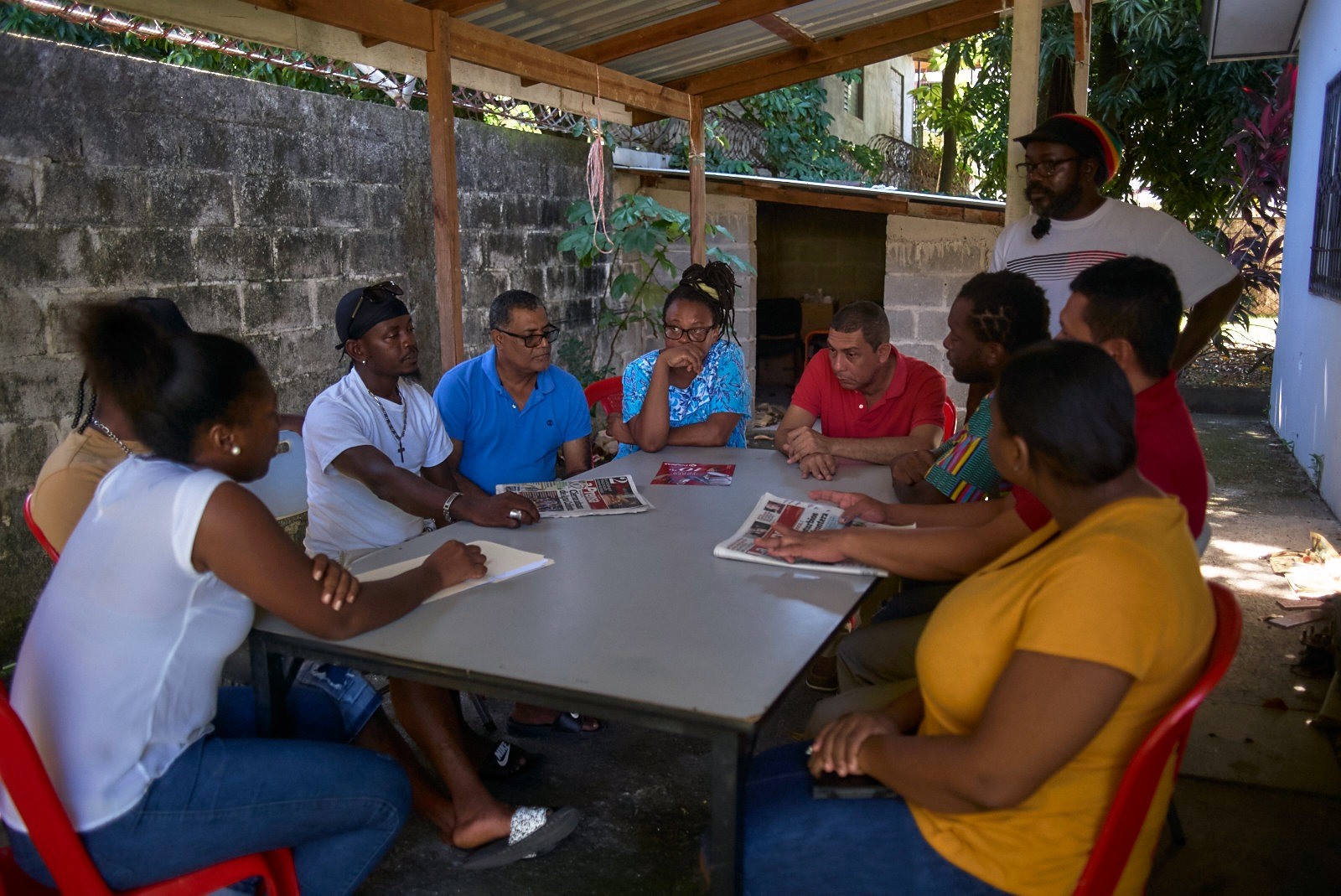 Miriam Miranda, (centre, blue) meets with staff and members of OFRANEH, an organization fighting to protect the land and cultural rights of Afro-descendent people in Honduras. Miriam and OFRANEH’s members face increased threats to their security and operating space, but are also on the frontlines of piloting holistic protection strategies.

As the 20th anniversary of the UN Declaration on Human Rights Defenders nears, the global human rights community is rethinking its basic strategies and assumptions around the protection of human rights defenders. In the face of rising authoritarianism, increasing political repression and widespread backtracking on rights commitments, there are many new threats to human rights defenders (HRDs)—threats that conventional approaches to protection are not addressing.

In Honduras, for example, one of the most  dangerous countries in the world for environmental defenders, prominent defender and Afrodescendant leader, Miriam Miranda, explains, “Human rights defenders are at greater risk than ever today because our states, our governments are actually responding to the interests of transnational capital in our countries, and really have no policies in place to protect human rights defenders. This is one of the great problems we face today.”

Why—after twenty years of building an ecosystem of public policies, institutions, resources, and toolkits dedicated to protecting human rights defenders—are they at greater risk than ever?

As powerful political and economic forces use democratic tools to stifle democracy, the shifting dynamics of power in the world pose new threats and challenges to activists. Increasingly repressive states operate with impunity, using violence to protect corporate and elite economic interests, while organized religious extremists work behind the scenes to reverse advances in women’s and LGBTQ rights, often by promoting misogyny and hate. Although political repression and attacks on dissent have happened before in history, these distinct actors seem more interconnected across the world and their collusion poses new existential threats to the legitimacy and effectiveness of the human rights system. As Marusia Lopez Cruz, a Mexican woman human rights defender with JASS put it, “This is our reality. Groups with power that in the past operated in the shadows, behind the scenes—corporations, organized crime, religious fundamentalists—have captured institutions, hijacked states and are using laws and public resources to benefit their own interests.…to impose their vision of the world and above all to construct a narrative rooted in discrimination, racism, and misogyny. It’s a narrative designed to preserve inequalities, to ensure the advantages, privileges, and the power of an ever-smaller group of powerful elites in the world.”

Under the pretext of security, governments call activists “terrorists” and delegitimize their demands for justice as deviant and dangerous while also fueling widely prevalent prejudices and fears that serve to polarize societies and silence dissent. Claudia Samayoa, from  the Unit for Protection of Human Rights Defenders in Guatemala (UDEFEGUA) explains, “Throughout the region, it is believed that those who defend human rights are … conflictive, anti-development, communists, terrorists, or even members of organized crime.”

Rumours and misinformation are used to slander and shame activists, isolating them from their communities, and sexism and racism are exploited to create divisions within communities and social movements. For example, at-risk women defenders in Mesoamerica consistently report that being shamed as a ‘bad mother’ or being accused of having affairs is more devastating than physical attacks because it creates conflict within their own families, the one place that should provide a sense of belonging and security.

In this context, human rights defenders cannot rely on protection from the same governments that are attacking them. While key policy discussions around human rights defenders move through a cycle of UN resolutions and NGO reports, approaches to protection have evolved into standardized practices that focus too heavily on individual physical security and emergency response. Of course, normative advances at the international, regional, and national level matter; and, hard security measures (cameras, bullet-proof vests, escape rooms in offices etc.), or permanent relocation can be critical for highly threatened activists. But there is still insufficient investment in long-term approaches that strengthen community organization and safety while confronting the root causes of violence and inequality.

An additional challenge is the unintentional misalignment between global strategies aimed at denouncing violations, and the precarious realities of local organizations and communities that grassroots defenders belong to. For example, raising a defender’s profile internationally is often intended to increase their protection, but there are times that singling out an individual defender through an award or action may increase the vulnerability and risk for a defender at home, and can also exacerbate tensions within the communities and organizations that a defender relies on for survival.

Frontline human rights defenders and their organizations are not just the targets of violence; they are also innovators of effective self-defence strategies as a matter of survival and resistance. Many grassroots organizations and networks integrate some form of self-defence and solidarity into their ways of organizing. For example, the Quiché people of Guatemala defend their territory primarily through decision-making assemblies, communal care, economic solidarity, community guard forces, and emergency communication plans, enabling them to both prevent extractive companies from entering their land, but also creating an alternative way of living. These approaches have not been well-documented or understood by international NGOs and can be eclipsed by individual-oriented, rapid response work.

The international human rights community has much to learn from the approaches of grassroots movements and communities beyond protection. Their strategies are creating alternatives to the hyper-extractive economic models that rely on violence to thrive. These include a range of social and economic strategies that attempt to address the root causes of violence while simultaneously promoting local economic development and care for the environment.

Women defending rights and feminists have also made important contributions to how we understand risk and protection by drawing attention to the ways that violence and discrimination within families and within organizations create added vulnerabilities to outside threats. Misogyny and discrimination within communities can be exploited by powerful actors to shame and silence activists and divide communities. Women defenders—who are often excluded from leadership or formal structures of organizations—have expanded the very idea of “who is a defender” to help us see how women play a critical—though not formally recognized—role in defending rights in their communities and families, such as the many mothers and sisters in pursuit of justice for loved ones. Women defenders have also contributed to our increased recognition of wellbeing as an important element of safety—an important issue for all human rights defenders. Prioritizing collective self-care is increasingly recognized as a basic element of smart, safe, and effective activism.

Protection strategies must adapt to better accommodate and foster these holistic strategies, and new ways of thinking, to keep activists and organizations safe while also challenging the deep inequalities that take shape around gender, race, class, and sexuality. In recent years, as the Fund for Global Human Rights and JASS have worked together with allies to interrogate our own assumptions around the protection of defenders and civic space, we have gathered some of the lessons, insights, and strategies we’ve learned through this process into a multimedia page that can be used as an evolving resourceto help formulate more robust and effective approaches to protection that support movements and address new dynamics of power.

As the human rights community moves into a next chapter and marks the 20th anniversary of the UN Declaration on Human Rights Defenders it is an opportunity for us all to, once again, learn about the defence and protection of rights from the people on the frontlines, who daily confront the systemic causes of violence.

James Savage is program officer for the Enabling Environment for Human Rights Defenders Program at the Fund for Global Human Rights. His work focuses on civic space issues including narrative  building.

Lisa VeneKlasen is the executive director for JASS (Just Associates).