When in the field, human rights workers must be better prepared for trauma in order to heal from it.

On August 21, 2012, while I was walking in my hometown of Ambo, Ethiopia, a man that I didn’t recognize called me over. As soon as I went to him, he pulled me into a huge compound belonging to Ethiopia’s ruling party, EPRDF. I found myself in a very small and confined room in front of two individuals who immediately started hurling insults at me. I was completely disoriented until one of the men asked if I knew where I was.

I answered: “I’m in an office that belongs to the ruling party.”

He banged on the table with his fist, “Mr. Zelalem, you are dead wrong. This office belongs to the National Intelligence and Security Service.

That was the last conversation I had with these two men. For the next three hours, I was repeatedly forced onto the floor and slammed against the wall, flogged with a power cable, beaten, and threatened with a pistol.

They asked why I criticized the Ethiopian government, why I mocked the death of the late Ethiopian prime minster—rather, why I laughed on the date his death was announced—who sponsored my “subversive activities”, and who were my collaborators. After three hours of brutal treatment and interrogation, one of the men presented a bundle of papers and told me that they could circumvent all of my work, including my personal blog, whilst waving a newsletter that belonged to an outlawed opposition group in Ethiopia. When they threw the papers at me, I saw that my personal blog address was written on the cover page. I was stunned at the blatant forgery and said so. They resumed beating me with a renewed vigor. Finally, they told me to cooperate and to cease all my writing activities. Then they ordered me to leave that place. 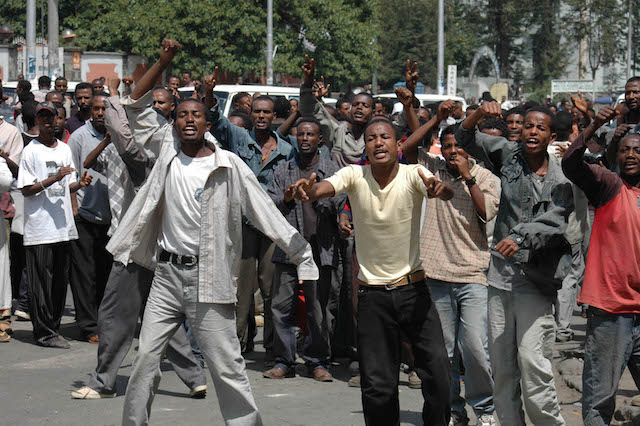 In Ethiopia, the absence of a support structure—at the institutional and individual levels—makes overcoming a traumatic experience challenging for many human rights activists.

When I finally pulled myself off the floor, I was not able to stand properly for a moment. I staggered home and stayed there for the next five days, unable to go out because of the injuries inflicted on my knees with a pistol-butt.

Over the next few months, I refrained from sharing my experience with anyone beyond my inner circle. I deactivated my social media accounts and destroyed my online persona. I was often sleepless. There were dark spots on my arms and knees that worried me a lot—a reminder of that day tattooed on my body. Thankfully, in the following months, my injured knees recovered and the dark spots on my body faded. But the memories of that day continue to haunt me.

Indeed, overcoming the psychological trauma was much more difficult than the cybercide I committed or recovering from the physical wounds. The memories linger everywhere I go. I tried to avoid seeing the place where I was tortured, and I left my hometown for more than a month, terrified that I would see my attackers. I tried to distract my mind by keeping it busy, but I did not know how to overcome this pain.

Like many people who experience or witness a violent and unexpected assault, I had not been adequately prepared. Although I had been reading stories of torture by Ethiopian security officials long before this incident, I didn’t expect such horrors to reach my own life.

After a long cyber disappearance, I slowly crawled back. I cautiously re-created my cyber existence; I avoided befriending people I didn’t know and I curated my political posts so I would only bump up against the safe wall of like-minded people. I tried to stay apolitical with all my public activities. Still, these all were preemptive measures to avoid another ordeal—they did not help me overcome the trauma I had sustained.

Later, upon self-reflection, I realized that I was consumed with these post-traumatic symptoms because I was not prepared. I was not ready or expecting to face such violence, even if living in a one-party tyrannical state like Ethiopia calls for such vigilance.

After months of contemplation and sitting with trauma, I have found that expectation, readiness, and communication are essential tools in such situations. Expecting the worst can ease the suddenness of the event, readiness minimizes the post-traumatic effect, and communication with others can ease the pain. At the same time, we must keep this in balance because fear can have a crippling effect on work, and chronic stress can have harmful health effects.

In Ethiopia, the absence of a support structure—at the institutional and individual levels—makes overcoming a traumatic experience challenging for many human rights activists. The fact that torture and ill-treatment are rampant makes us vulnerable, and the lack of preparedness and support networks harms those who are victimized. Many activists have left their work after a traumatic event. Realistic expectations and adequate preparations, along with a support network and avenues for communication, are imperatives for human rights workers.

In mid-2014, a year and a half after that first terrifying ordeal, members of the National Intelligence and Security Service came to my office again. This time I was arrested and transported from my hometown to the capital, Addis Ababa. While on the road, they asked why I refused to quit working on human rights issues—after I was warned (tortured) back in 2012. In that moment, the memories of my previous ordeal came flooding back, and I steeled myself for another assault. I promptly found myself in a torture chamber. And unlike my previous three hours of suffering, this time they held me for three months. And yet, this second experience did not have nearly the same traumatic effects as the first one. Did experience diminish its effect? Was I more prepared? I’m not sure. But it seems that expecting the worst, making oneself ready and communicating the story with others helped me to endure the experience. I transitioned more smoothly from trauma to normalcy—and then to helping others.

Zelalem Kibret is an Ethiopian lawyer and a Zone 9 Blogger. Currently, he’s a Scholar-in-Residence at the Center for Human Rights and Global Justice at New York University.

Security and well-being: two sides of the same coin

Turning weakness into strength: lessons as a new advocate